From December 8 to 10, international leaders from public, private, and civil society sectors came together in Rio de Janeiro for the Clinton Global Initiative Latin America conference. The focus was on efforts to advance the region’s social and economic progress with sessions on developing human capacity, designing for green growth and harnessing technology and innovation. To an audience primarily of Brazilian politicians, business and civil society leaders, and with Rio Mayor Eduardo Paes and Governor Sérgio Cabral both on stage with him, former US President Bill Clinton made his speech, here transcribed, calling for creative cooperation across sectors to tackle today’s problems. 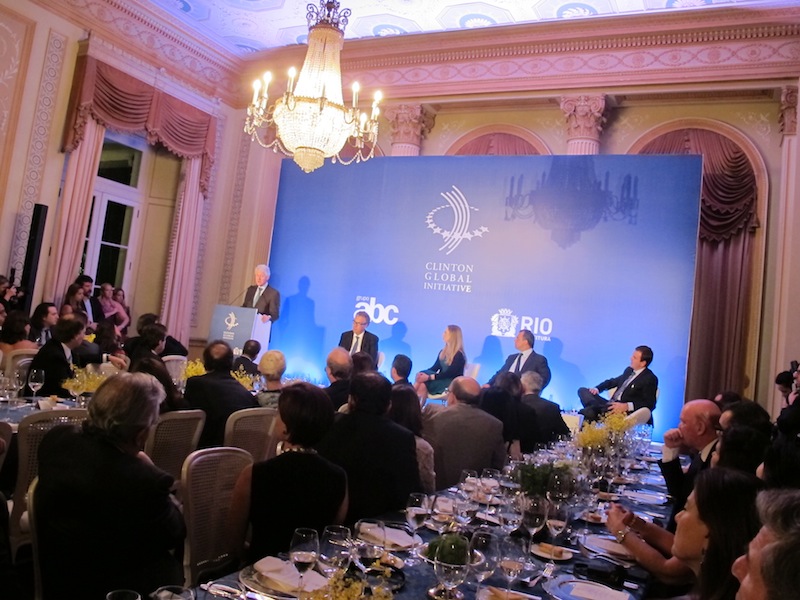 Secondly, Chelsea and I – and we didn’t speak on this – you know what we were thinking? One of our closest friends, Terry McAuliffe, was just elected governor of Virginia – he is the first governor in forty years to be elected who is of the same party as the president. It’s one of the crazy quirks of American politics that Virginia and New Jersey elect their governor in the year after the president’s race, so for forty years they always chose someone else. Republican president, the Democrats won the governorship. Democratic president, the Republicans won it. So Terry McAuliffe did this. Now, for as long as I have known him, he always said, “Bill Clinton is the greatest president. This person is the greatest governor. This person has the greatest fundraisers.” I was convinced it would cause his defeat. But he won anyway. So I recommend that both of you, for the rest of your political careers, run the movie of bragging on each other. There’s too much tearing down; we need more building up.

Mr. Mayor I want to thank you for the work we have done together through the C-40 to improve the environment. I want to thank you for your insistent work to have us come here. I thought to myself, ‘Why would Rio care if the Clinton Global Initiative came? You’ve got the World Cup and the Olympics.’ And in our meetings, as my daughter said, everybody who comes to our meetings is supposed to actually promise to do something. And I’ll say a little more about that in a minute.

Governor, I want to thank you for first, so long ago when I came as president, welcoming me, and for your service, and for making so many of these neighborhoods safe, for helping to create a climate in which our service project can proceed.

When I became president, a long time ago, almost 21 years ago, I could see, that as the first person to serve as president at the end of the Cold War, we were living in a very different time. A time where borders would look more like nets than walls. Where we were not going to be divided by the Berlin Wall, or any other wall, and we had great opportunities, but we would also become more vulnerable. And so I tried to create, within the United States, a country of shared prosperity and shared responsibilities. A shared sense of community. And I tried to establish – in the world at large but especially with Canada, Mexico, Central America, the Caribbean and South America – a community of cooperation.

We had the North American Free Trade Agreement (NAFTA). We started the Summit of the Americas again for the first time in thirty years. We had two major financial efforts: one was to help Mexico, one to help Brazil in 1998, to keep on the path of growth and prosperity. We helped to solve the border dispute between Ecuador and Peru. We helped to stop a conflict in Paraguay from throwing over its democracy. And we helped Colombia. At a time when one third of the country was within the hands of an alien power. Just a few years ago – we have the mayor of Medellín here – a few years ago we had the 50th anniversary of the Inter-American Development Bank in his city, which just shortly before that had been thought of as the drug capital of the world. The Secretary of the Treasury of the United States came there. I came there. We were guarded by the US Secret Service. They said, “Oh yeah, go there, it’s a really safe place.” It belongs to the people of Colombia again.

I worked with Argentina particularly closely, and we thank you for being here. The first time we tried to restore democracy to Haiti. And then this time, after the earthquake, Brazil was in charge of the United Nations Security Force and did a brilliant job. Both countries did.

It has been my experience, both in office and out, since I left, that conflict may be good politics but cooperation gets more done. That when people work together and focus on how to do something, and not just who’s going to do it and who’s going to get credit, and how much money is involved – but how can we do this thing, whatever it is we need to do. How can we solve this problem, or seize this opportunity, faster, better, at lower cost – you get a better result. All over the world, creative cooperation is breeding good things, and constant conflict is causing heartbreak. 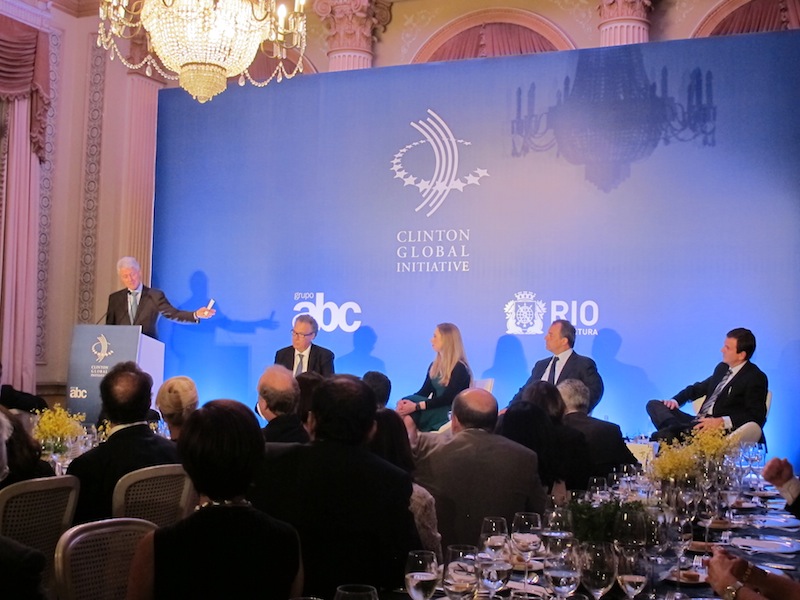 So this is, for me, much bigger than even for the governor and the mayor. Even for my friend Nizan (Guanaes), who would’ve probably never spoken to me again if we hadn’t had CGI in Rio. It’s a bigger deal for me, because most of my life has been lived. Therefore, most of my work has been done. But I know this: We are going to share the future. The only question is: What are the terms of the sharing? Will we share a future of misery or share a future of shared prosperity and shared responsibility? Will we share a future where we celebrate our diversity because we live in a common humanity, or will we think our differences matter more than our common humanity and keep shooting each other over them? That’s the only question. We are going to share a future.

I cannot imagine the world working out, not just for Americans, or Brazilians, or Argentinians, or Colombians, but the whole world working out in any way that is good for our children and grandchildren, unless we prove that we understand that the duty of every citizen in every country is to take the problems right around the corner and all the way around the world, and build up the positive forces that bring us together, and reduce the negative forces that tie us together. It is the work of citizenship. That’s all we do at Clinton Global Initiative. That’s it.

Most of the time I was in politics I had a great time – I loved politics, I plead guilty, I loved ‘em. I was proud to be a politician. But we debated two things: What are you going to do, and how much money are you going to spend? That’s then. The greatest development in 21st century politics is now we think about – whatever you’re going to do, however much money you have, the real thing is: how do you propose to do it? How will you do this, so your good intention is turned into real change? You can have all the money in the world and still not pacify a favela, right? You have to do it right.

We talked about all the things the mayor is doing and all of our energy ideas and how you can grow an economy and reduce the greenhouse gas emissions – you have to know how to do that. And my daughter, who is now spending more than half her time on our foundation, for which I am very grateful…. We spend all of our time looking all around the world for the best examples of people answering how to do something. And we have found that every single one of them reflects a network of creative cooperation between government, the private sector, and civil society. And between people at all income levels. We have tried very hard at this meeting to make sure that civil society is represented, not just by philanthropists who are financially successful and well endowed, but by people representing grassroots groups. So I leave you with that thought.

We’re going to have a good meeting here. I will apologize that my family – like so many, including all your current presidents and former presidents – we are going to Mr. Mandela’s funeral. He was a friend to every member of my family. For twenty years, a friend. And a magnificent human being and a good president for South Africa. So we have to go. But we’ve worked hard to make this a good meeting. I thank, along with Nizan, all the sponsors, and Bob Harrison, and all of our CGI group. And I ask you to remember that.

I’ve been doing this a long time. Most important things are we have to figure out how to make creative cooperation replace constant conflict as the preferred political engine. Mandela did it by putting the people who put him in prison for 27 years in his cabinet. The next time you think you can’t get along with somebody who’s your opponent, just remember that. The reason we’re treating him as he deserves, like one of the most important people in the world in the last hundred years, is not just that he was in prison for 27 years. It’s that he got out, not just that he invited his jailors to his inauguration, but he put the leaders of the party who put him in prison in his government. Because he knew that he could not create a new country, hold it together and move it forward unless they did it together. And I remember a bunch of those guys. They didn’t agree on everything. I didn’t agree with Mandela on everything. We’d continue to argue, and you can’t represent two different countries without any differences. That wasn’t the point. The point was, they were together. They had bigger interests in staying together and making progress than they did tearing things down because they were a part of it. And it freed them to trust one another, and it freed them to focus on how to do things, not how to fight over them.

That’s all we’re trying to do at CGI. I think it gives more meaning to life. I think this constant struggle where nothing ever happens may be good politics, but it is ultimately completely disappointing. Tomorrow the world – or the next day – the world will celebrate the life of a person who not just went to prison for 27 years, but got elected president of a country that allowed its black citizens to vote for the first time in 300 years and actually did a fine job. Because he decided to share the future. That’s really what we’re trying to do here. And Mayor, Governor, Nizan, ladies and gentlemen, we are very grateful to all of you for making it possible, and we’re grateful to have our friends from Colombia and Argentina here tomorrow, from all over Latin America and the Caribbean, trying to actually do something and not just talk about it. Thank you very much.

–Thank you to Rachel Fox for transcribing this speech.–