On Tuesday morning, December 3rd, the Municipal Legislative Chamber filled with approximately one hundred people–favela residents, public defenders, professors, and human rights advocates–eager to participate in the public hearing on “Removals for Large Projects in the City of Rio de Janeiro” after the previous hearing in September had been cancelled 30 minutes prior to start time. In one fiery speech after another, participants recounted an illegal and arbitrary process of removals, and expressed dissatisfaction with the lack of representation from the Mayor’s office and the rest of City Council. In spite of this, the event carried symbolic importance, as activists took the opportunity to publicly remember the hundreds of families removed from Vila Harmonia and Recreio II for construction of the Transoeste BRT and to honor the ongoing resistance efforts of Vila Autódromo, Providência, and Horto among others. 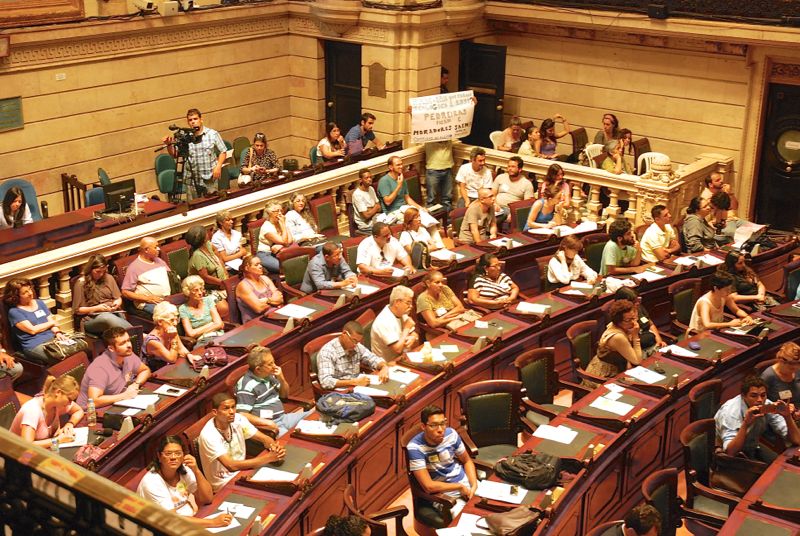 Recurring themes in the speeches included the lack of transparency and an absence of dialogue with communities throughout the removal process. Stories of inadequate and even non-existent financial compensation tied with false promises about the conditions of resettlement housing also served as a cautionary tale to those families currently fighting. Many expressed outrage at the turnover of public land to private speculative interests in the Port Zone and Barra da Tijuca.

Speakers framed the removals within the context of broader trends in Rio de Janeiro, including disrespect for existing legislation and the violation of fundamental human rights in the name of business deals and sporting events. City Councilman Renato Cinco (PSOL), who organized the hearing as a member of the Commission for the Defense of Human Rights, stated that the right to housing is being “systematically disrespected by the City,” as thousands more families stand to lose their homes during the preparation for the World Cup and 2016 Olympics.

“Suffering a removal is both painful and degrading,” explained Roberto Marinho, a Providência resident. “You learn that from one hour to the next your house will be removed, without explanation. I’ve never seen any proposed work project that stated how many homes would be removed.” He elaborated that many residents had to leave nice houses, constructed over many years, and move to “cubicles” far from the city center. 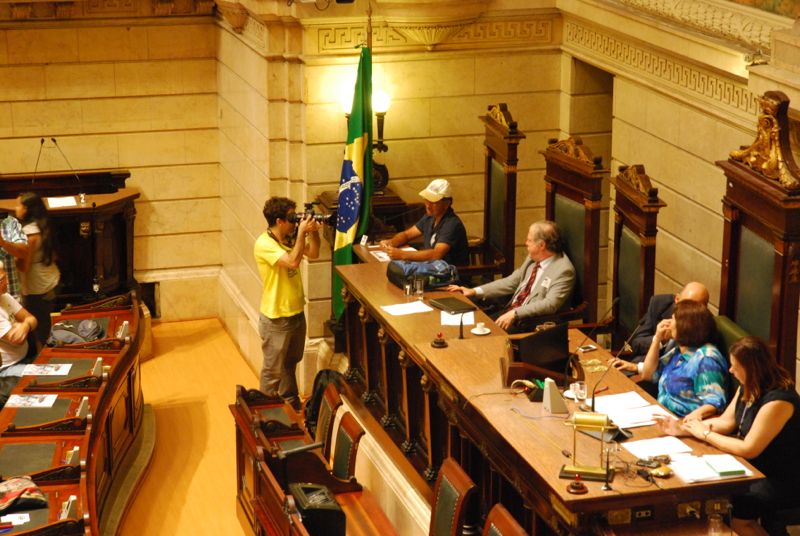 Carlos Vainer, an Urbanism Professor at UFRJ, presented alarming statistics: “During the military dictatorship, around 35,000 people were removed in Rio. In the current process, around 70,000 people will be removed from their homes, and this under a supposedly democratic regime.” He stated that the true “legacy” of the mega-events will be “an increased public debt, a brutally segregated city, and an increasingly authoritarian government.”

Jorge Santos, a former resident of Vila Recreio II in Jacarepaguá who lost his home due to the Transoeste works, stated: “There are too many laws and not enough people capable of making sure that existing laws are enforced. What we need most in Rio de Janeiro is transparency.” Maria Lúcia de Pontes, a Rio de Janeiro State Public Defender from the Land and Housing Nucleus cited existing legislation that prohibits removals except in cases where the health and safety of the family are at risk. “The legislation already provides [a vision of] the city as we would like it be: a city in which repression is prohibited, in which removals are prohibited. You don’t need to create a new law, it is already there!” Councilman Renato Cinco called resettlement an “exceptional measure” to be used if there is no alternative. 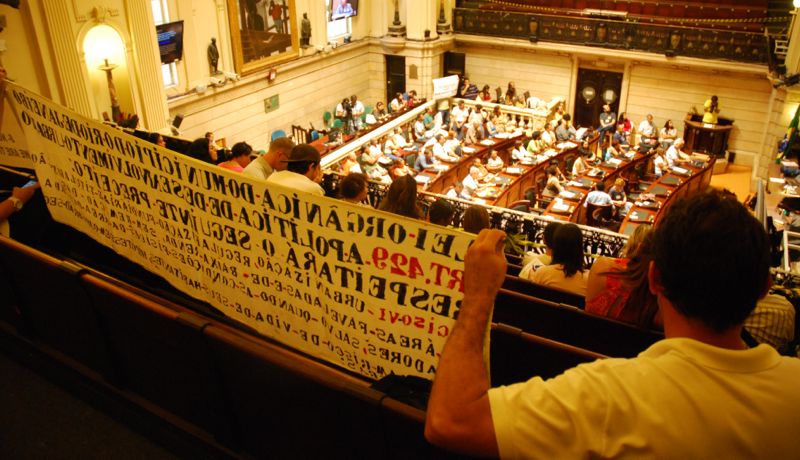 An obvious question pervaded the session: Where is everyone else? Residents from favelas faced with removals, representatives from social movements and NGOs, and a small cohort of sympathetic City Council representatives (6 out of 51 total) filled the floor of the Chamber. Councilwoman Teresa Bergher (PSDB) who presided over the hearing, said in her opening remarks: “I would like to publicly state my regret at the absence of the Executive Branch, despite repeated invitation. It is remiss of the Mayor’s office to be absent, probably a decision made to avoid having to give an explanation for the arbitrary nature of the removals.”

Without representation from those officials who are enabling and undertaking removals, Tuesday’s hearing stands primarily as yet another piece of evidence in a long history of disrespectful practices and the absence of effective dialogue.

Resilient as ever, favela residents and activists seized this as an opportunity to put the memory of communities already removed on the official record, to publicly celebrate symbolic examples of resistance, and to call for strength and unity in the coming year.