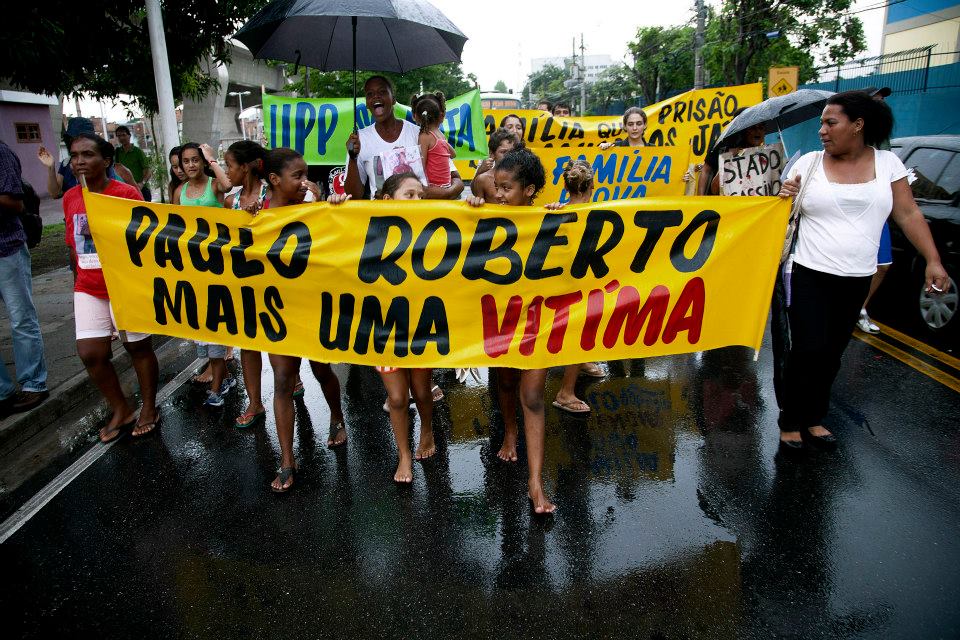 “On International Human Rights Day we demand justice and rights for the people of Manguinhos and all favelas,” stated Fatima dos Santos Pinho de Menezes, mother of 18-year old Paulo Roberto, killed by officers from the Pacifying Police Unit (UPP), on the October 17, 2013.

On the afternoon of Tuesday, December 10, despite heavy rain, family and friends of Paulo Roberto Pinho de Menezes, his mother, brothers and sister, friends, neighbors and members of social movements held a demonstration which for several hours closed some of the main streets of Rio de Janeiro’s North Zone: sections of Leopoldo Bulhões Avenue, Dom Hélder Câmara Avenue and Democráticos Avenue in Manguinhos.

“I know that nothing can bring back my son, but now his name will be remembered in the struggle to make sure crimes like this never happen again. Paulo Roberto is present with us in the fight against this state of exception and against all the violence the state is promoting, whether through the UPP or through the PAC,” says Fatima, with scathing reference to the Pacifying Police Units (UPP), a policy from Rio de Janeiro State Military Police and the Growth Acceleration Program (PAC). PAC is a federal policy, in partnership with state and municipal governments, carried out in Manguinhos under the Urbanization of Large Favelas, Sanitation and Housing, with non-returnable investments of around R$1 billion. The Manguinhos PAC, much like many similar PAC projects, is criticized for promoting arbitrary removals and for failing to prioritize crucial housing and sanitation improvements, amongst other problems. 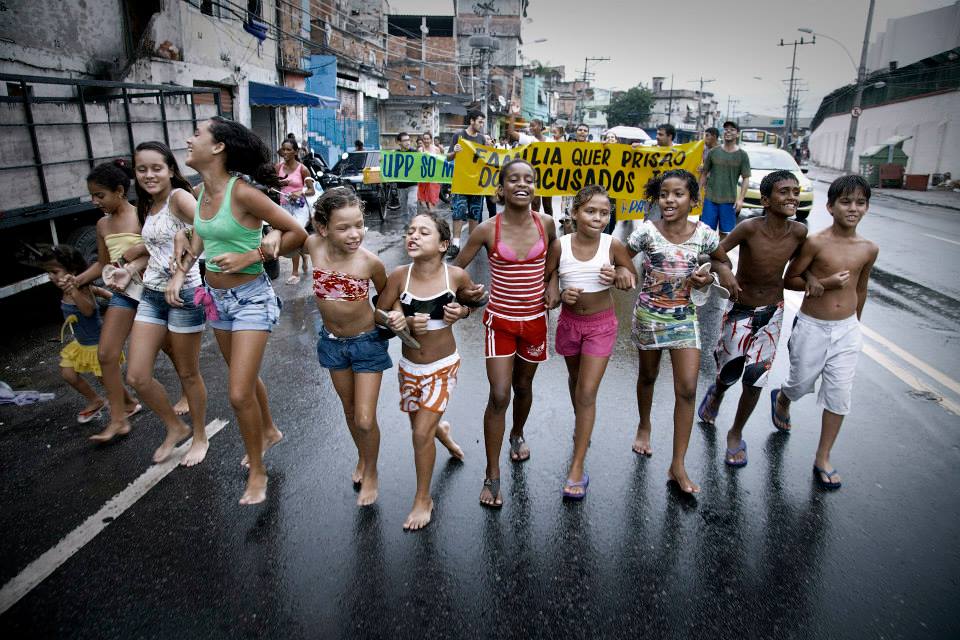 On the day of the demonstration, a reconstruction of the crime was due to be carried out by the Civil Police. However, this did not happen. The chief police officer for the 21st precinct, responsible for the Manguinhos area, José Pedro da Costa, told the press that the reconstruction was suspended due to the absence of several witnesses. However, residents claim that he had in fact told them he did not want the press to be present. “When such situations occur in the formal city in rich or middle class neighbourhoods the press are allowed to be there. When it happens in a favela, they don’t want the world to see what happens and the disastrous state we live in,” says Maria das Dores da Silva, 55, one of the demonstrators and a neighbor of Paulo Roberto’s family. The officer requested the temporary imprisonment of the five accused Military Police officers, José Luciano da Costa Neto, Rodrigo da Costa Tavares, José Cardoso de Araújo Junior, João Paulo da Silva Rocha and Jefferson Albuquerque Pinto. However, so far, no prison sentence has been given by the court. According the UPP commander, the accused officers are now not working on the streets, but working internally in the community. A police inquiry is also underway to investigate the death.

According to the technical report carried out by the Medical Legal Institute (IML), which belongs to the Secretary of State for Security for Rio de Janeiro State, Paulo Roberto died from asphyxiation, the same cause given in the investigation into the death of the bricklayer Amarildo de Souza, killed by the UPP in Rocinha. A shocking scene showing asphyxiation was brought to cinemas screens in the film Elite Squad, which portrays the human rights violations carried out by the Special Operations Batallion (BOPE) – considered the elite squad of Rio de Janeiro’s Military Police. In the scene, a plastic bag is put over the victim’s head and tied at the bottom. “I thought that only BOPE carried out such scenes of asphyxiation, yet now we see that the UPP also has this practice, be it here or in Rocinha,” says Pedro Paulo, a young Manguinhos resident who took part in the protest. The IML report dismisses the police version of events, in which the young man is said to have died from “a sudden cardiac arrest, caused by drug use.”

According to residents who witnessed the crime, Paulo Roberto, just like Amarildo, was beaten and tortured to death: “They wouldn’t let us save him,” residents afirm. In leaflets distributed in favelas by the Independent and Popular Front (FIP-RJ), activists question: “Who killed Paulo Roberto? A cardiac arrest, as the police claim? Or was it the persecution and terror carried out by the UPP for several months (according to his family)? Paulo Roberto was cowardly beaten by the Military Police, with the complicity of the Rapid Response Health Unit (UPA) who denied him help and would not allow his family to accompany him inside their buildings. The shameful lie that the young man died from the effects of drugs, and the attempt to criminalize him, rightly sparks people’s outrage (…) The UPP is the armed branch of an electoral farce, the reproduction in practice of enclosing and controlling the favela territories.”

“These five police officers are responsible, yet there are at least another fifteen Military Police officers involved. Two weeks ago, they were threatening us, shouting at us in the street, telling us they were going to kill us,” tells Paulo Roberto’s mother, Fatima Pinho.

“They arrested protestors on the June 20 and  October 15, 2013, with no proof of any crime having been committed, and with no evidence that those arrested represented any danger to society. Yet the police is a corporation, and many criminal police officers are still out there, threatening, and carrying out atrocities. Arresting one officer or another, even ten or one hundred doesn’t achieve anything. The police is an institution from the dictatorship, which must be stopped, it’s a violation of citizenship,” says Rafael Daguerre, from the Independent and Popular Front, one of the social movements present at the demonstration.

André Luiz Deodoro, 19, an activist from the Manguinhos Human Rights Laboratory, points out that the UPP, as well as the PAC, is part of a set of segregational government policies that aim to directly or indirectly remove the poorest residents to the most distant margins of the city, and control the favelas through military force. “Dozens of people have disappeared from Manguinhos, either kicked out of their houses with one hand in front and the other behind, erased from official residential registers and the Brazilian Institute of Geography and Statistics (IBGE) data by the removals mafia. Hundreds of families have been tortured by the terrible living conditions caused by the PAC. Humiliated as if they were invaders, in a disastrous situation. Privatized health remains silent! Who is responsible for sanitation?” he accuses. 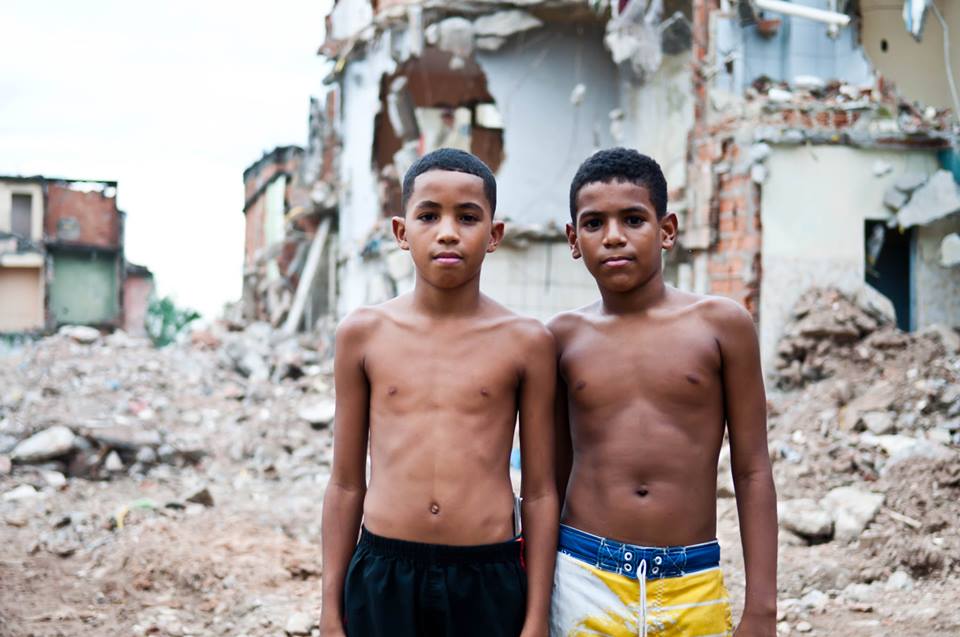 The Oswaldo Cruz Foundation is responsible for sanitation in the neighbourhood of Manguinhos. It manages the basic health care policies in the area and through the support foundation, Fiotec, is also responsible for the management of the Manguinhos UPA (Rapid Response Health Unit). “To this day we haven’t seen a single health report that evaluates and denounces the critical situation. In this sense, the so-called local participatory healthcare management, under the control of the Oswaldo Cruz Foundation is no more than a farce,” adds André.

“The pacification policy can not be understood as an isolated phenomena, whether that’s because it reconfigures criminal networks, or because it is a key element in real estate speculation and gentrification. Not only is it linked to the forced ‘inclusion’ of segments of the population through consumption, but also the exclusion of anyone who does not adapt to this pattern of inclusion through consumption. This is Dilma, Cabral and Paes’s civilizing project. It’s a racist project. It proposes inclusion into the markets, but practices exclusion in the areas of human rights through practices of exception – torture, death, disappearances, and coercion. Dozens of disappearances happen in pacified favelas every month. There have been various accusations of threats, aggression, abuse of authority, sexual harassment of women, rape and prejudiced treatment of the community by the UPP military officers” analyzes Emerson Fonseca, a local resident and one of the organizers of the Memorial Act for Paulo Roberto.

At least three people, one grandfather and two mothers, have died through health problems caused by the PAC construction works and the terror they bring. According to local residents, leeches, mosquitos and rats as well as iron bars and cement blocks suspended amongst the ruins of demolished houses, excessive levels of dust, lack of drinking water and electricity, contaminated water, diabetes due to stress caused by eviction threats received from PAC agents, are just a few of the problems. “Dozens, maybe even hundreds of families are living in these conditions in Manguinhos, as well as thousands of others in favelas all over the city, who are affected by the construction work related to international mega-events, such as the World Cup and the Olympics,” declares professor Carlos Vainer, from the Institute of Research and Urban and Regional Planning at the Rio de Janeiro Federal University (UFRJ). 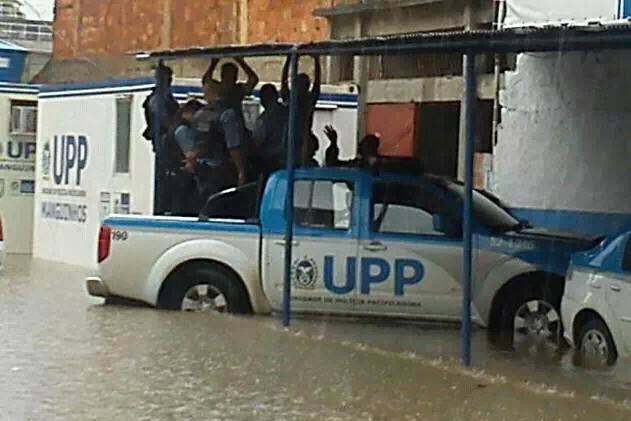 The PAC planned investments in sanitation, but work on the proposed sewage collection pipes, which would carry the sewage from the whole neighborhood and surrounding area to the treatment station, has not even started. The sewage network, built by the PAC, spews the collected sewage into the Faria-Timbó and Jacaré rivers, before running into the Guanabara Bay. This constitutes an environmental crime, a formal complaint about which has already been raised by the Public Ministry to the courts. The construction of this collector pipe has been planned since the Guanabara Bay De-Pollution Program, proposed in the nineties using foreign investments, yet the plan exists only on paper to this day.

The day after the demonstration in Manguinhos, heavy rains left the whole city, including Manguinhos, waterlogged. The city came to a halt. Many important access roads, such as Avenida Brasil, were partially un-passable. Thousands of people were unable to get to work or even to leave home. Police officers from the Manguinhos UPP had to shelter in the back of a pick-up truck. The UPP have come to Manguinhos and the other ‘pacified’ communities tangled up in a context of the promotion of entrepreneurship. With their arrival in these communities private enterprise, principally telephone companies, swoop in. Yet local business people question the lack of infrastructure: “during the latest rains, everything got flooded. I lost everything I had invested in, freezers, an oven, electrical equipment, electronics and raw materials. I had to close and sell the property. Without infrastructure, any initiative is destined to fail. That’s why many big investments end up getting wasted,” complains José Filgueiras, who used to have a pizzeria in the neighborhood.