The City of Rio is determined to capitalize on the opportunity to host the Olympic and Paralympic Games in 2016. It aims to deliver one of the most memorable and picturesque Games ever … (Ville de Rio de Janeiro et COB, Annexe II, p. 2)

On May 3rd, 2011, the City of Rio de Janeiro, in conjunction with the Brazilian Olympic Committee (NOC), launched an international competition for the best Olympic Park project, to be constructed on the shore of the Jacarepaguá Lagoon in Barra da Tijuca. The city had already attempted to grant this contract to private companies in December 2010, without engaging in any type of selection process, but this decision was recalled due to accusations of lack of transparency and failure to respect the process of fair market competiveness. So this is now the city’s second attempt to launch the largest of the four Olympic infrastructure projects. Interested participants have until July 28th to submit their proposal and the winner is expected to be announced on August 15th.

The main objectives and characteristics desired for the Olympic Park are outlined in a 900-page document on the City’s website. The principal funders of this US$400 million project are the City of Rio de Janeiro and the federal Minister of Sports, who are also responsible for guaranteeing the provision of the following services: roads, lighting of public ways, and installation of sewer and water distribution systems.

The supervision of the construction process is being administered by Rio 2016, a private company (referred to as the ‘delivery authority’) financed entirely with public funds. Although the City will remain the sole owner of the project site and infrastructure, the responsibility of site management will change during the various phases, from pre-construction to post-game. During construction, the city and winning contractor will be responsible for all costs related to the operations and maintenance of the site.

Afterwards, for the duration of the training period pre-games, as well as throughout the sporting event itself, Rio 2016 will become responsible for all costs related to infrastructure upkeep. Keep in mind is that Rio 2016 is an abbreviation for the Rio 2016 Olympic and Paralympics Games Organizing Committee (NOC + IPC). Once the Games have drawn to a close, NOC will become the key administrator responsible to transition the site from game mode to legacy mode.

This last phase, which is mandatory in the project proposal, aims to redevelop 60% of the Olympic Park infrastructure into a new urban district. According to the NOC, the legacy plan will facilitate the expansion of the Barra da Tijuca neighborhood. This phase of development will essentially be focused on the selling of Olympic infrastructure to private enterprises which will assume responsibility for the redevelopment and valorization of the area. One important detail: the International Olympic Committee (IOC) will have the final word on the selected project and therefore on the final cost of the Olympic Park. 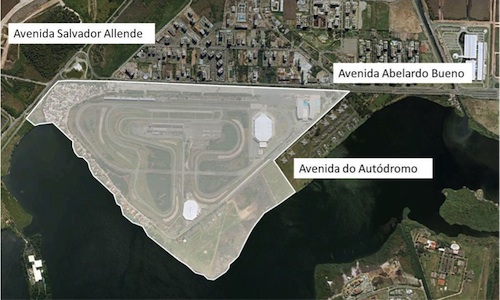 The site chosen by the City, NOC and IOC is in the West Zone of Rio, situated on the north shore of the Jacarepaguá Lagoon. Triangularly shaped, the area spans approximately 1,180,000m2 or, 12,700,000ft2 and currently belongs to the City of Rio de Janeiro. The area today is primarily occupied by the Nelson Picket raceway. A smaller northwestern portion is occupied by the 40-year old Vila Autódromo favela, which includes approximately 1400 homes.

The above image, taken from the official project proposal, suggests that both the raceway and community will be removed to make way for the Olympic Park. Despite the drastic transformations expected at the location, the authorities are defending this project on the basis that it is strategically located from a transport perspective. Specifically, the site is located at the intersection of two highways that are currently under construction: the Transcarioca which will link Barra da Tijuca with the International Airport at the City’s northeastern limits, and the Transolimpica which will assure rapid transit between the Olympic Village and another Olympic complex, Deodoro in the North Zone of the city. Also, it has been argued by the City and NOC that the ‘legacy mode’ will have a positive impact on land value in this already highly valued area.

The City of Rio de Janeiro and the NOC are putting heavy emphasis on their desire to host the most environmentally friendly Olympic Games to date. Many measures are trying to project an image of environmental consciousness by the organizing committee. These include rainwater recycling; the creation of a 25m ‘green zone’ around the Olympic installations, intended to protect the lagoon (or justify evictions); and finally, the desire to respond to LEED norms as well as ISO 14001.

From a social sustainability point of view, authorities claim to be reassuring citizens that the highest standards of social inclusion will be adopted and achieved. In fact, in the project proposal, the City continually reaffirms that citizens will be asked to participate in the planning process in order to assure a suitable degree of transparency and social inclusion in the process itself. This is somewhat ironic, considering the City ignored transparency as an issue in its first attempt, last December, to straightforwardly assign the project to a private company.

Reading this document has led us to reflect on the mismatch between the romanticized discourse of social justice and environmental sustainability promoted by the authorities, and the hidden reality lived by citizens, one that is violent and segregating. This document appears to us on the ground as a smoke screen in the hopes of distracting naïve observers. Because in reality the implementation of its goal will require the displacement of an entire community that is resisting the traumatic changes that the project demands. A community with a 40 year history of pacific coexistence within itself and with neighboring mega events like the Formula 1 and Rock in Rio; a community with land title. Vila Autódromo’s residents’ only “crime” is having settled, built homes, invested in, and worked to build a region of the city that would one day become valuable.

Several notable breaks of high concern have already occurred with regard to the proposed procedure. For instance, project proposals are being made without any public consultation, even though there was a guarantee of participation and transparency. Also, the relocation of communities is occurring without any compensation plan, nor option of alternative housing in some cases. Local businesses are being demolished with zero compensation.

Yes, the authorities will likely achieve the goals cited in the introductory quote. The “City of Rio… (will) capitalize on the opportunity…” But, at what cost?

With public investments evaluated at more than US$15b for hosting the Olympic Games, the City is raising land value that is, according to them, under valued in its actual use. But who will benefit from this valuation process? Clearly not the relocated population, nor citizens who will suffer from post-Olympic inflation. The ‘legacy mode’ represents the continued privatization of public land, veiled under a discourse of common good. In the manner that the authorities are imposing these mega urban projects on the city, these Games will indeed be “the most memorable and picturesque Games ever.” If all proceeds according to City officials and the IOC’s plans, the 2016 Olympic Games will sharply increase inequality in what is already an infamously unequal city, and engrave themselves in the collective memory as a violent and destructive force, where market logic was used to benefit a few, prevailing over the collective well-being.