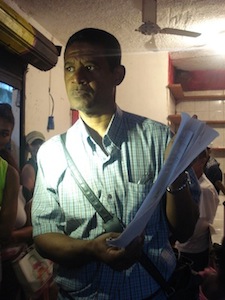 Officials from City Government and the Justice Department showed up at Ricelia Fernandes’ home in Pavão/Pavãozinho, a community in Copacabana, the heart of the South Zone, last Friday June 10th, 2011, at 5pm with a message: she needed to turn over her business for demolition. They had come by the previous Tuesday with no official documentation but returned Friday with the paperwork, still giving no notice of when eviction would happen. “I asked if I would receive compensation,” says Ricelia. The answer: “None.”

The following Tuesday morning, City and Justice officials arrived with a slew of police officers (around 15) from the community’s UPP, visibly armed with pepper spray, tear gas, and large guns telling her she had to vacate immediately. Other residents gathered in support both inside and outside Ricelia’s business, filling the tight pathway as the police officers lined the walls. One woman, Érika, was inside holding her baby when a police officer threatened her with pepper spray if she refused to exit. Érika’s response was to call other mothers inside with their children, testing the police officer’s word. He backed down from his threat, but it was at this point that Ricelia turned over the building, for fear of violence. 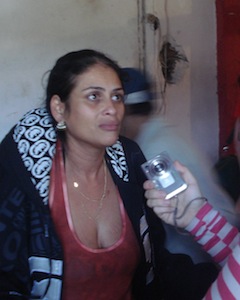 Ricelia financially supports her mother of 62 and three children, one of whom is her son (ages 7, 14, and 15), thanks to her business, a well-known local bar, at its location for over 10 years. “How am I going to support my family?!” she cried. A Justice Official present claimed that the eviction and demolition are to make way for a road and public housing unit; he was sure to point out, however, that this was just the information on the document sent with him. When asked about compensation or other options for the family, he responded, “I don’t have this information.”

Ricelia had no choice but to vacate the premises and ask residents to store her belongings. “I’m not sending anything to the City storage units because there things disappear. I have a friend who lost everything in the storage unit.” She has now filed a lawsuit and is waiting. Her business has yet to be demolished. “We have no explanations for anything. We only hear that it’s got to go, but nobody comes to negotiate with us.” 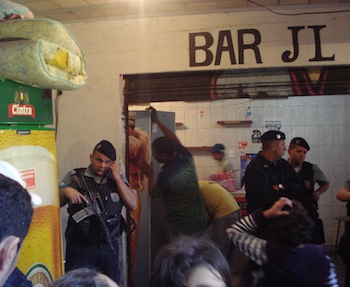 Ricelia and other community members also provide some eerie information about residents whose houses have already been demolished and who were promised social rent from City Government. “There are a lot of people whose houses have already been demolished and are currently renting somewhere. They were only able to rent for one month because City Government just didn’t deposit the money anymore. Many people have come back to their homes, stuck the door on, and put the window up, because they’re demolishing and not giving anyone anything.”

Below, see a video detailing the situation, by RioUnderBelly: