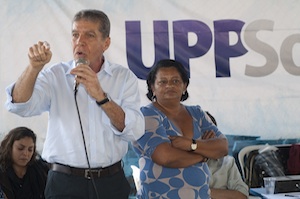 On Friday June 10th, the UPP (Pacifying Policy Unit) Social [program] hosted a public meeting on Praça Américo Brum in the historic neighborhood of Morro da Providência. Home to over 5,500 residents in 1,720 households, Morro da Providência is recognized as the first favela in Brazil–approximately 110 years old–and is also located within the site of the country’s first public-private partnership (PPP) for urban revitalization — the project called Porto Maravilha (“Marvellous Port”). In November 2010, The Porto Novo Consortium was formed when Odebrecht Infraestrutura, OAS, and Carioca Engenharia, together with the Rio de Janeiro City Government, signed a R$7.6 billion (US$4.77b) contract to revitalize the neighborhoods between Saúde and Gamboa.

According to the UPP Social website, the Port Region (Região Portuária) will receive a total of R$141 billion in investment to revitalize 5 million m2 through the construction of tunnels, sidewalks, bicycle paths, plazas, as well as water, drainage, and sewage systems and treatment plants. This transformation will “improve the quality of life” of residents and is expected to take 15 years, creating significant economic and social impacts for the region including an aquarium, several art museums, and job opportunities. 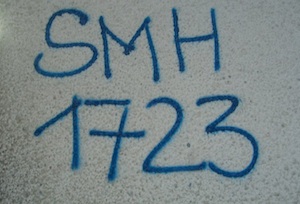 However, along with positive infrastructural changes and the promise to retain cultural heritage, residents of Morro da Providência are being faced with the reality that the Secretaria Municipal de Habitação (SMH-Municipal Secretary of Housing) will forcibly evict over 100 families from their homes. Earlier this year, several houses on the hill were spray-painted with the letters SMH followed by a number labeling them for easy reference with regard to their imminent removal. Stated reasons for these evictions were either (1) that houses were in areas of “risk,” or (2) that they were in the way of the 665-meter-long teleférico (cable car) that will be built to facilitate access to the top of the hill. Residents complained that no one asked permission to spray-paint their houses, no one explained why their homes were painted, and once residents became aware of the city’s intentions, no one told them how long they would be allowed to remain in their homes. 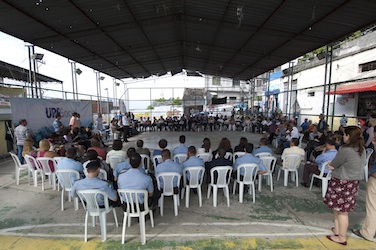 On Friday morning, approximately 200 attendees sat on rented plastic chairs inside an all-purpose Praça (public square), enclosed by chain-link fence. Most people inside the fence were representatives from outside the community, while many of the moradores (residents) sat, as spectators, on concrete benches on the other side of the fence. During the course of the meeting, which started an hour late, several municipal officials spoke eloquently on behalf of the revitalization projects including Jorge Bittar, Rio’s housing secretary; Ricardo Henriques, President of the Instituto Municipal de Urbanismo Pereira Passos and Coordinator of the UPP Social program; and Augusto Ribeiro, Municipal Secretary of Labor and Employment. Also in attendance was Paul Vidal, the Municipal Secretary of Culture; Alberto Silva of the Urban Development Company of the port region; Joaquin Miller, the secretary of the Municipal Department of Conservation; as well as several UPP Captains, researchers, and NGOs. 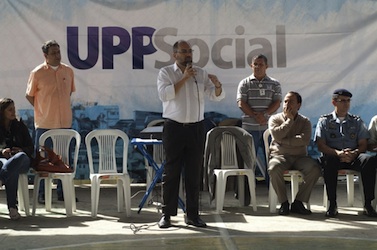 Just as the administrative officials went to work on this Friday morning, so too did many residents. In this respect, the lack of community residents during the meeting only underscored its absurdity. Officially, the meeting’s purpose was to open a “dialogue” between residents and city officials about the current Morar Carioca upgrading project’s plans which seek to “unite the divided city” and to bring “transparency to the pacified regions.” Although city officials emphasized the importance of “citizenship” during the project finalization, the only vocalized concessions on behalf of the government concerned the specific location of the teleférico. Meanwhile, when resident leaders including the widely respected Rosiete Marinho and Mauríco Hora expressed their concerns about social infrastructure and the lack of accessible information, officials were busy looking at their watches and laughing amongst themselves.

At one point, city officials even called the residents “liars” and warned them to stop spreading false rumors. The residents graciously responded by asking the officials to stop treating them like “invaders” and to provide them with timely and correct information and alternatives. One major complaint is that the alternative housing that is being built for displaced residents in nearby Pedra Lisa will only be ready two years after the demolition of their homes. It is interesting to note that most residents are not complaining about the project plans, but rather the way, and order, in which the government is handling the situation.

All in all, the purpose of the meeting was to publically demonstrate the City’s willingness to accommodate the needs and desires of residents during the revitalization process. However, just because the meeting was held in Morro da Providência does not mean that residents are being heard or that their needs are being met.

Below, see a recent video about the situation in Providência, by Witness.org: