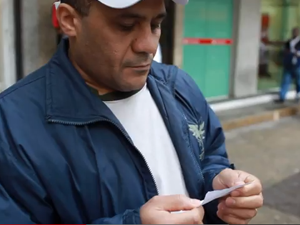 Though favela evictions are not new to the city of Rio de Janeiro, Antonio Valmin de Sousa was taken by surprise when City officials came to his house on June 28 and handed him a notification saying that he would have to leave the place he has called home for nearly two decades. 300 other residents of the Pavão-Pavãozinho favela (resting on a hill right above the affluent Copacabana area) received the same notification as de Sousa that said their homes were marked for removal (literally ‘marked’ with spray paint) to make way for a new road through the area. These eviction notices came shortly after bar owner Ricélia Fernandes in Pavão-Pavãozinho was forcefully told by City officials that her business would be shut down and its structure demolished. This is not the first time City officials have tried to evict people from their homes in Pavão-Pavãozinho, and it is still unclear what will happen to residents when/if their houses are demolished.

Two years ago, Francisca Da Silva Melo was told by City government that her house would be destroyed. When officials came, they claimed the whole hill that Pavão-Pavãozinho rests on belonged to them, and they threatened to move people to Campo Grande, a militia-controlled area that is more dangerous than Pavão-Pavãozinho. “You have to accept,” they told her, “this isn’t yours, you don’t have anything.” City government said it would offer compensation while a new apartment for her was being built, located away from the home she built for herself and her family nearly 50 years ago in Pavão-Pavãozinho. When the monthly compensation stopped coming 5 months after she moved out and the apartment still unfinished, she moved back into her house in Pavão-Pavãozinho, and City officials haven’t contacted her since.

The same thing happened to Lucia Pessoa da Silva’s family in 2008. They were told they had to leave the house, but she refused to go because she has four children to provide for, one of whom needs surgery, and no means of uprooting her family to move to a different location. Officials offered her compensation of R$20,000 for her house, a house that she says is worth R$80,000. “My life has stopped,” she claims with anger, as she is still unable to upgrade her home for fear of losing it to the City. The people living below her left their house (one floor beneath hers), and construction workers came to knock down the entire frame of the building. She paid the workers off with R$20 to stop the demolition, but now her house is suffering from water leakage after the frame was broken.

Just like the other 300 residents of Pavão-Pavãozinho were told of their eviction, Antonio Valmin de Sousa had to take a day off of work on Monday, July 4, to go all the way to City Hall to address the slip of paper that the city government officials had left with his adolescent son. Even if City government offers to relocate his family from Pavão-Pavãozinho, it will complicate his life immensely, as he has lived in his home for nearly 16 years, has a pregnant wife and child to take care of, and runs a bakery in Pavão-Pavãozinho that he will have to continue to look after even if he is moved out of the area. He, and the others who received the notification, was told that his house is scheduled for removal because it is in an “at risk area.” Apparently, only the homes in the way of the road scheduled to be built are in an “at risk area,” but the houses in immediate proximity but not in the way, are deemed “safe.” It would appear, then, that the houses are only deemed in a “dangerous zone” as a cover story for the public and a reason to relocate the people living in the way of the road’s construction.

Upon arrival at City Hall, De Sousa waited in a line at the program desk for Minha Casa, Minha Vida, a federal program that the City uses to put a positive spin on favela relocations, painting a picture of hope and prosperity for people being relocated. After talking with City government officials, de Sousa learned that the notification to go the the Prefeitura that day was merely to confirm he had received the sheet of paper. He will now have to take off another day of work to come back to City Hall and schedule an appointment with Caixa Econômica to find out when his house is scheduled for removal and what type of compensation he will receive.

Although this news appears grim for De Sousa and his family, he plans to stay and fight for as long as possible. There are many community meetings being arranged now for and by the people of Pavão-Pavãozinho to come up with a strategy to stand up to the City and protect the area that has long been the place that, including the neighboring Cantagalo favela, the nearly 17,000 residents call home.