For the original by Guilherme Junior and Rosilene Milotti in Portuguese on Viva Favela click here.

Viva Favela correspondents Guilherme Junior and Rosilene Milotti watched the São Clemente Grêmio Recreativo Samba School (GRES) parade last Sunday, on the theme “favela.” Read what they had to say about the show!

São Clemente Pays a Fine Tribute to the Favelas

“Poor… but rich in emotion/ Free… but a slave to passion/ Favela… I will frame you in watercolor/ Beautiful on this catwalk.” São Clemente chose to respresent the favela with words of exaltation, in a parade that was full of humor and homage to the communities. Residents of many communities in Brazil must have recognized themselves in this happy, charming parade. 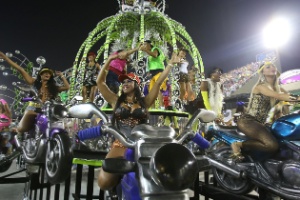 The floats and parade blocks told the story of the beginning of these communities, from Morro da Providência, considered Rio’s first favela, up through the most recently pacified communities. There were a number of homages to the samba schools that grew from the favela context, such as Mangueira, Rocinha, and Salgueiro. The group didn’t forget to pay its respect to its birthplace, Santa Marta, in Botafogo.

There was room for funk, rap, and hip hop. NGOs such as Afroreggae, Nós do Morro, and CUFA were cited as examples of organizations that contribute to the reduction of inequality in the city, bringing healthcare, sports, and education to the people.

The school did not make many criticisms about the system that makes life in the favela more chaotic. Instead, it preferred to show the human side of what is one of the most fertile sources of Brazilian culture. This may have been a choice, to vary the discourse on favelas, which is almost always focused on social problems.

The samba theme was treated with grace and subtlety. Never before had the shacks and brick houses been so well represented at the Sambodrome. The culture of samba was represented by malandros and  cabrochas in a beautiful tribute. The work of carnaval organizers Bruno Martins, Muqueca, and Thiago Martins resulted in a playful parade that stepped lightly along the avenue. 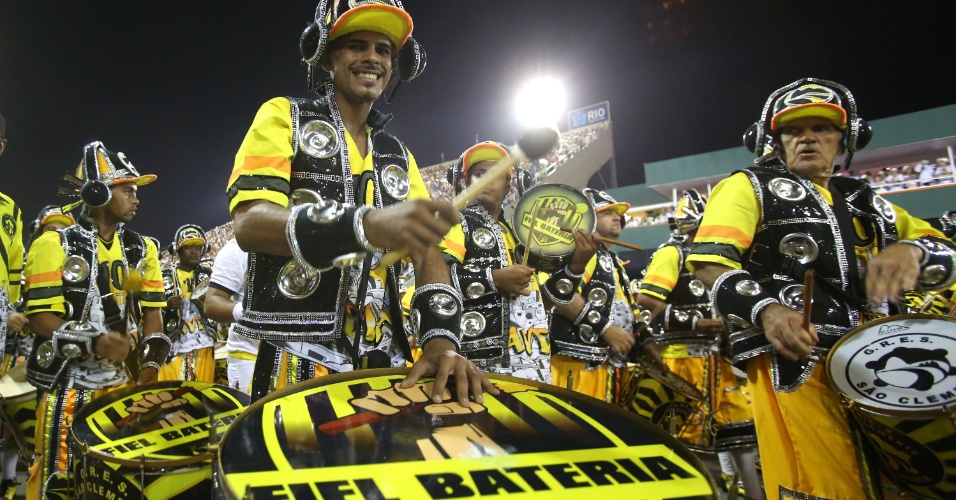 São Clemente Brings its Favela-Product to the Sambodrome

It’s no news that the favela comes down the hill during Carnaval to parade in the Sambodrome. But this is the first time that a samba school has chosen the favela as its parade theme. São Clemente, an association and community known for feeling like a big family where everyone knows each other, opted to portray the favelas as they appear in soap operas and commercials. 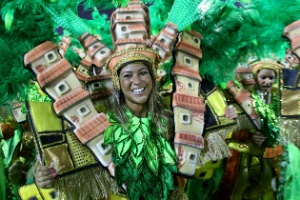 The parade blocks, for example, made references to  Morro da Babilônia, Rocinha, Complexo do Alemão, Santa Marta, Mangueira, and Providência – some of the favelas most popular with the press or with tourists, or located close to the high-income parts of the city. They also portrayed favelas in Cairo, Buenos Aires, and Indonesia. It was a shame, however, that the uniqueness of some of the favelas was not shown, since they have many differences that set them apart from one other.

Following the tendency to show the most “marketable” side of the communities, stereotypes were reinforced. The favela appeared colorful, full of women in tight clothing, washerwomen, young mothers, moto-taxis and street vendors (and graffiti vandals, according to commentators at Globo). This representation of the favela, however, produces a distorted portrait: the favela looks like a place of samba, funk, barbecues on the rooftop patio, black bean stew–when it is much more than that. There is also rock and classical music in the favela, for example. Another illustration of this distortion was the flag bearer, who was wearing an afro, which is a style rarely seen in the communities.

The school made the questionable decision–as openly discussed by its organizers–to show the favela almost entirely in a positive light. This is understandable given that the negative side of favelas is reported daily in the press, but at the same time, the chance was missed to show the world something real. It looks like everything is beautiful, but it isn’t. We were shown the Canudos War, whose soldiers created the first favelas in Rio, but where was the daily war resident’s face? This complaint was briefly raised in the words of the samba song, which called for justice to live.

With the theme “Favela,” one could have hoped for richer content than what was presented on Sunday. São Clemente did not manage to surprise nor excite the street at the Sambodrome, wasting a theme that part of the audience could have truly identified with.