For the original by Andressa Cabral and Rodrigues Moura in Portuguese for Viva Favela click here.

The democratization of higher education, spurred by scholarship programs and education public policy, is changing the face of many professions that had previously been out of reach of students from low-income families. Such is the case with journalism. Today’s newsrooms reflect a bit more of the diversity of Brazilian society, since they have begun to include more journalists from favelas and the urban periphery. Journalism students Bruno Queiroga, 23, and Monica Leal, 20, residents of Complexo do Alemão, and Marcelo Resende, 21, from Jacarezinho, are part of this new generation of journalists preparing to begin their careers. They spoke about their motivations for choosing journalism. They are betting that their backgrounds will work to their advantage, providing them with a knowledge of the city that sets them apart from their colleagues from other income brackets. 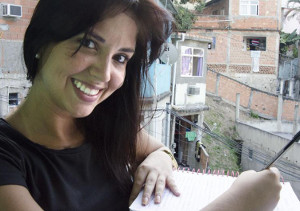 “I have always worked to show favelas in a different light. I think I did that at college, showing people around me what a favela could do, what a person from a favela could do,” says Bruno, a student in his final semester at FACHA (Hélio Afonso Integrated Colleges). He says he chose the profession as a way to tell new stories and to sharpen people’s critical awareness. But he believes his own trajectory has already contributed to transforming the views of his university and internship colleagues. “The fact that I come from a favela has allowed other people to see, in a natural way, favela residents in an academic environment, without a complex about being there. People from favelas and from the outskirts of the city are able to show sides of the story that the mainstream press normally doesn’t show,” he says.

Monique Leal, who is in her penultimate semester at UNISUAM, believes that her university studies have changed her own way of seeing, allowing her to observe the world, and especially the favela, from a new angle. “Journalism really changed the way I see the favela. Before (university) I would just come and go, without noticing anything. Now I want to know the whole story. I want to look for information that didn’t matter to me before, for example the story of my community’s evolution,” she says.

The students agree that the greatest obstacle to the profession is the barrier of higher education, despite the fact that since 2009 a diploma hasn’t been required [to work in journalism]. The lack of incentive and the need to work at a young age makes pursuing higher education complicated for students. “Most favela residents aren’t used to seeing their relatives going to college. Some start working very young, and others follow negative paths,” says Monique. Marcelo Resende, who is in the second year at Rio de Janeiro’s State University (UERJ), agrees. “Favela residents have the problem that they see so few examples of how education can bring about a better life for someone, either in the favela or elsewhere,” he says.

Bruno witnessed firsthand the shift in journalists’ socio-cultural profile. “When I was an intern, the oldest people in the editing room were from neighborhoods like Copacabana, Laranjeiras, Niterói… Today, the number of people in journalism schools from favelas is much greater,” he says. Tássia di Carvalho, a journalist at the newspaper O Dia, shares this perception. A resident of Belford Roxo, in the Baixada Fluminense, she has seen professionals from the periphery begin to enter the newsroom. “Journalism has changed a lot since I was in college in 2005. Today there are many more black students, favela and Baixada residents. In our editing room there are journalists from a variety of places, like Bangu, Belford Roxo and Nova Iguaçu, for example.”

Tássia thinks it’s extremely important that people from favelas enter the profession since they contribute greatly to the work. “People from favelas have a lot to say after decades of forced silence. And mixing is important everywhere. Different people bring different ways of seeing that can enrich and expand the team,” she says.

In the newsroom, the principle of objectivity is the winner from the broadened dialogue brought about by diverse backgrounds. “I am not just a journalist – I’m first and foremost a citizen who works to undo certain preconceived notions, be they racial, political, social, sexual, economic, etc. We have to fight against popular misconceptions,” concludes Resende.