Rio is a fascinating and multi-layered city. For visitors and students, unravelling the complex relationships between the sun, sand, samba and enduring crime and poverty in the city can prove difficult. Fortunately, the books available on Rio and the favelas are compelling, funny and diverse. Ranging from a gripping enthnography of black humor amongst women in the favela to an in-depth historical study of the legal basis of poverty, readers have many options to suit different tastes and interests. Outlined below are some of the most famous and widely recommended books on Rio’s favelas. 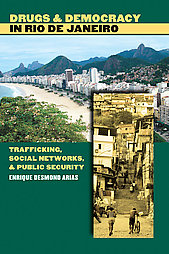 Drugs and Democracy in Rio de Janeiro is a study conducted over nine years documenting the emergence of urban violence in Rio. Arias studied the uniquely complex relationships between the state, drug trafficking gangs, and civil leaders to demonstrate how criminal networks became so deeply embedded in society. The book includes case studies of Tubarão, Santa Ana and Vigário Geral employing participant observation and interview research. These case studies illustrate his general theory of how violent actors in Brazil and more generally South America are closely linked to political systems and provide a large challenge for the development of democratic governance.

Interestingly, this book provides fresh perspectives on understanding how violence develops, arguing that instead of the traditional conception of criminals as isolated deviant factions, collaboration between criminal, civic and state actors are regular and fundamental to the existence of criminal groups. The cross-institutional ties allow criminals to take on illegal activities with minimal opposition, allow politicians to secure essential favela votes, and enable residents to access essential services. For those interested in network theory, criminology and sociology this is an essential read. 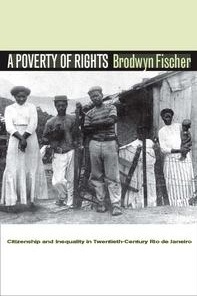 A Poverty of Rights by Brodwyn Fisher

A Poverty of Rights is an excellent investigation of the period between 1930 and 1964, chiefly during the rule of President Getúlio Vargas, when the legal and institutional basis for Brazilian citizenship arose. Divided into four parts on urban planning and regulatory law, labor and social welfare laws, criminal justice, and property rights, this book is a must-read for anyone interested in the legal ‘basis’ of poverty.

Fisher looks in detail at the effects of remodeling and beautification attempts on urban geography, demographic factors such as mass migration from the northeast of Brazil and explanations as to why poor citizens were obliged to “create their own urban world in the suburbs, swamps, hills, and backyards of the civilized city.”

Under Vargas, law and citizenship dramatically extended their range and in some senses foreshadowed political, economic and civil rights for all. Yet, the continuing illegality of favelas deprived residents of any ability to claim their rights and made vulnerability and dependence chronic features of Carioca poverty. The citizenship offered to the poor in illegal settlements was “curtailed by laws and processes that outlawed critical aspects of their daily existence, clashed with less formal systems of value and practice, or required material and bureaucratic resources that most poor people could not lay hands on.”

Fischer argues that the informality of the poor allowed Rio’s elite society to function and thrive. Informal settlements saved the city from devoting scant resources to the poor, cut labor and tax bills and enabled politicians to trade social development programs for votes. For Fischer, the ongoing vulnerability of the poor became a source of power that is still critical to networks of profit and political power today. Reading this book will give the reader an understanding of the Vargas period, the urban history of Rio and the broader interactions between law, rights and informality, through today.

Available in English – Published in 2008 by Stanford University Press 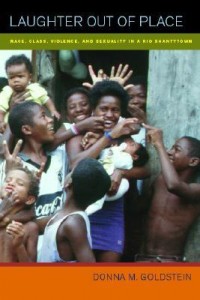 Laughter Out of Place: Race, Class, Violence, and Sexuality in a Rio Shantytown by Donna Goldstein

Goldstein’s ethnography, an intimate portrait of violence, suffering and humor amongst women in the Felicidade Eterna favela, is both informative and a delight to read. Laughter Out of Place is based around the stories told by a domestic worker and resident–the incredibly charismatic Glória. Through Glória we are introduced to the lives and struggles of her entourage of children, children’s partners, boyfriends and friends. Glória herself describes her home as a “a revolving door of extended family through which…blood and fictive kin and the hungry can find shelter and be informally adopted and cared for.”

Based on over a decade of fieldwork, the book focuses on the creative responses–absurdist and black humor–that individuals use to cope with daily conditions of humiliation and despair. One particularly poignant part of the ethnography recounts Glória’s chance encounter with the father of her eldest son Pedro Paulo. Pedro had been a member of the Comando Vermelho drug faction and was killed in a shoot-out with police in Rocinha. Glória explains, laughing, that when she told her ex-partner about their son’s death he began weeping. She cannot believe that Pedro’s father, who hadn’t contributed in any way to raising their son, can be experiencing any kind of grief for the death of his son who he treated like a stranger. The anecdote offers a glimpse into the difficulties faced by women in favelas: the politics of sexuality, providing for many children on a single salary, and managing a large family.

This detailed ethnography reveals both the difficulties of living in a favela and the dignity and resilience of inhabitants. With chapters focusing on class, race and domestic worker/employee relations this is a good introduction for students and anybody seeking an intimate, and unexpectedly funny, account of daily life in the favela.

Available in English – Published in 2003 by University of California Press 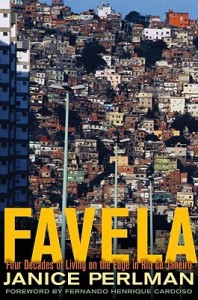 Favela: Four Decades of Living on the Edge in Rio de Janeiro by Janice Perlman

Janice Perlman’s first book The Myth of Marginality (1979) has long been considered an essential text for anybody hoping to understand the complexities of poverty in Rio de Janeiro. Her most recent book Favela: Four Decades of Living on the Edge in Rio de Janeiro revisits the communities studied in her first book, analyzing how the last 30 years have changed residents’ lives.

One main advantage of Perlman’s longitudinal study it that it demonstrates how urban policy has affected the lives of favela residents in the long-term, taking into account the perspectives of children and grandchildren. Perlman revisits those evicted from Catacumba in 1970 to public housing complexes in Nova Brasília in Complexo do Alemão and those in Duque de Caixas in the Baixada Fluminense.

The book flits between popular social science and academic styles and includes statistical analysis of data collected in questionnaires to support Perlman’s research conclusions. The book attempts to explain how the ‘poverty trap’ operates, showing that despite the existence of some social mobility and increasing education, the stigma that remains attached to favelas and their residents still prevents upward mobility, even for the most hardworking and talented. The work includes interviews with study participants, and an examination of related changes including growth in the drug trade, expansion of education, gentrification, uneven growth and employment.
Perlman’s groundbreaking study demonstrates the difficulty of studying, understanding and writing about favelas. In her own words:

“Whatever generalization you make about favelas can be contradicted by a counter-example. If you show their vibrant side, you risk romanticizing poverty. If you dwell on the violent side, you obscure their vitality and you risk propagating wrong-minded stereotypes and stigma that residents battle every day. Everything in a favela contains its opposite.”

Available in English – Published in 2010 by Oxford University Press 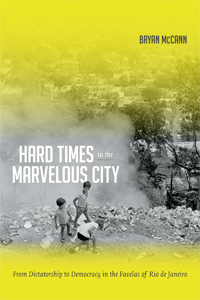 Hard Times in the Marvellous City: From Dictatorship to Democracy in the Favelas of Rio de Janeiro by Bryan McCann

For anybody seeking to understand more about Rio’s development at the end of the Military Dictatorship, Hard Times provides an excellent history of the period from the late 1970s onwards in which favelas were consolidated, residents were calling for re-democratization and changed seemed inevitable.

The book then examines why reforms failed to meet expectations, focusing on the development of schools, the growth of the drugs trade and the links between neighborhood associations and government. A more detailed book review was recently published on RioOnWatch and is available here.

Available in English – Published in 2014 by Duke University Press

Culture is our Weapon: Making Music and Changing Lives in Rio de Janeiro by Damian Platt and Patrick Neate 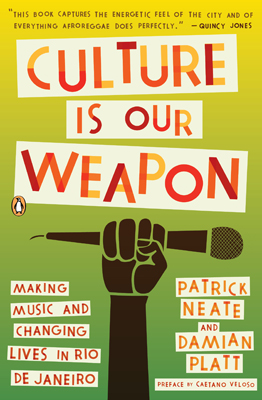 This book  tells the story of the work of the AfroReggae cultural group, established in 1993 that seek to divert favela youth away from violence and involvement in drug trafficking, starting with a community newspaper and cultural events in the Vigário Geral favela. AfroReggae has provided the opportunity to get involved in music, to promote black culture and with international tours, records deals, blocos in the center of Rio during carnival and a feature film Favela Rising, it provides a compelling portrait of the possibilities of resistance and empowerment through culture in Rio’s favelas.

Available in English – Published by Penguin in 2010

This book was written with experience gained by a pioneering research team comprising of members at LSE, UNESCO Brazil, Itaú Social, Itaú Cultural, AfroReggae and the Central Unica das Favelas (CUFA). Understanding Sociabilites takes a social psychology approach to explore how favela residents have built such a strong social fabric despite the difficulties presented by favela life. Interviews with leaders of over 100 social development projects are analyzed alongside opinions of specialists and observers to try and piece together an understanding of the rich social life of favelas. A more detailed outline of the study and launch event can be found here.

Available in both English and Portuguese online: free download from UNESCO