The eviction last Friday, April 10, saw over 8,000 people forcibly removed from the disused Telerj (now known as Oi) site, with 21 people injured, 18 arrested and four unconfirmed dead. Reports suggest the 4.30am eviction was carried out with little respect for the residents: Military Police pushed residents down the stairs, used pepper spray and tear gas unnecessarily and did not allow families to collect their possessions. On Friday evening, 500 of those evicted settled in an open-air public space outside the City government building on Avenida Presidente Vargas, one of the principal avenues in the city’s downtown. 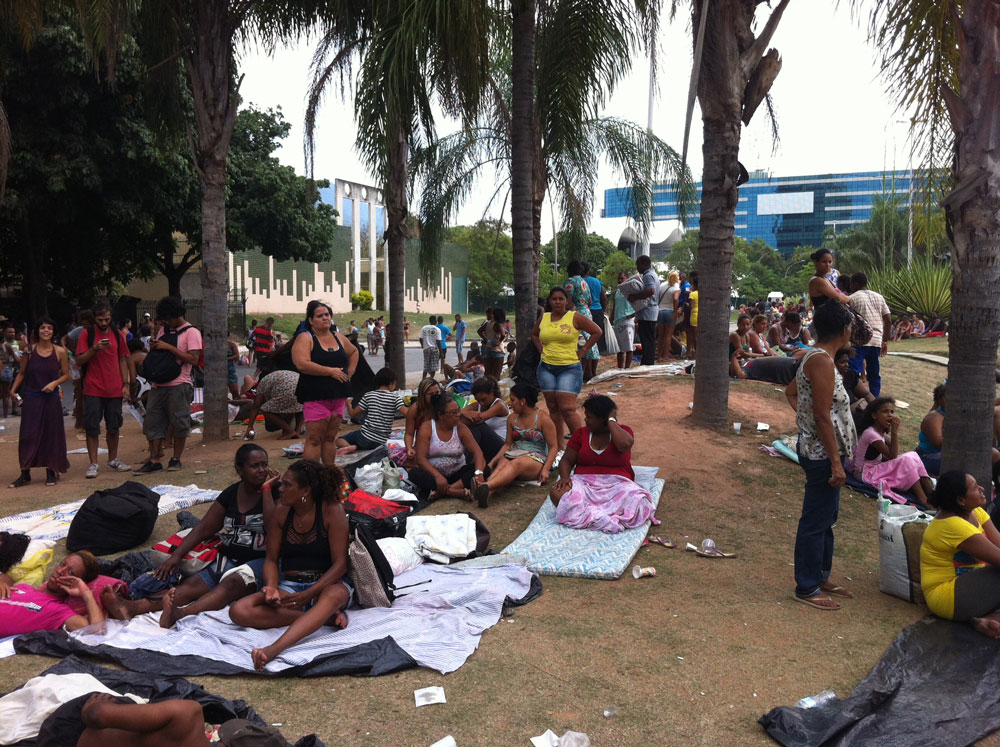 Families have been camping out for five days without food, shelter, water and basic toiletries. Occasional deliveries of resources are arriving to the camp but more are desperately required. On Sunday April 12, families sought shelter from torrential rains inside the sheltered footbridge across the avenue, also serving as the entrance to the Cidade Nova metro station. However, the Municipal Guard arrived to remove those camping indoors. When legal representatives of the settlers presented the Municipal Guard with a salvo conduto (a legal document usually used in war-time to permit the free flow of people without risk of imprisonment), it was discredited and only deemed relevant for the street area. Families are now camping back in the open-air space exposed to the weather.

The lives and welfare of those camping out continue at risk. On Tuesday April 14, Fernando, a student from Manguinhos and one of the first occupiers of the Telerj site, was hit by a car and killed whilst crossing Avenida Presidente Vargas. He was attempting to retrieve a food donation from the other side of the road, but was forced to cross the highway’s 12 lanes because the footbridge had been closed by the Municipal Guard.

Negotiations have been taking place between community leaders from at least three communities (Manguinhos, Rato Molhado, and Jacarezinho), a lawyer from Human Rights Defenders Institute (DDH) and City authorities, to decide the next steps for those camped. State officials are collecting names and cell phone numbers of the occupants in a self-admittedly disordered fashion with pen and paper; a process they claim is part of the registration.

An uncertain future for the ex-Telerj residents 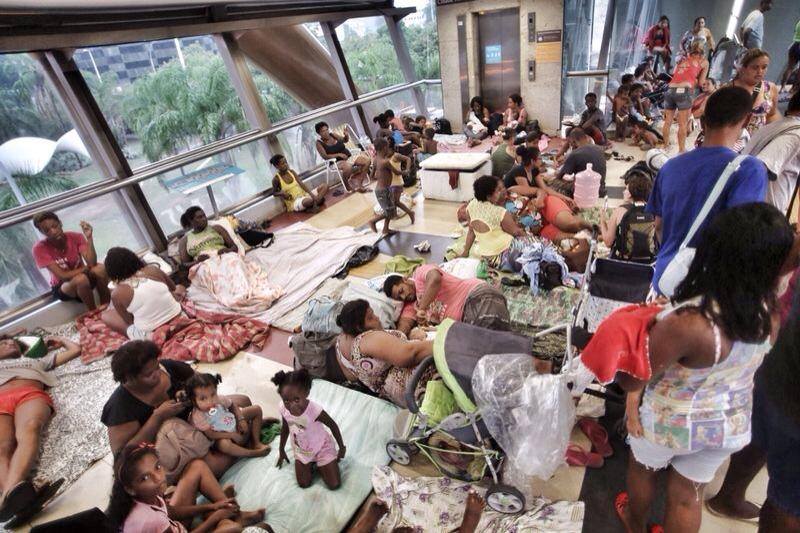 There is not a single clear set of demands by the diverse range of those who settled at the former Telerj site. Some wish to be registered on social housing programs, such as Minha Casa Minha Vida. Others who already have registered, such as Rosa from Manguinhos who registered three years ago with her daughter and grandchildren, have heard no response from the program since they registered, and are seeking alternative action. One woman shouted at a gathering outside the City government building, “We don’t want to register. We want a house. We want social rent,” referencing the cash transfer scheme of a monthly R$400 offered through the Morar Seguro state program.

Many of the 8,000 ex-residents of the Telerj site have returned to their previous communities. But hundreds remain on the street without a community to go to. According to a representative from the DDH, state officials offered to move the camp out of sight to a Municipal Guard building in São Cristóvão, where they say they can begin the registration process properly (15 minivans from the Municipal Development Secretariat were parked at the camp over the weekend on standby to transport the occupants). However, settlers maintain registration can take place at the current camp and are determined to remain on the site until acceptable solutions have been agreed.

The manner in which the events of the past five days have unfolded raises serious concerns for the fate of the homeless on Avenida Presidente Vargas. The government is yet to produce an adequate response that confronts the issues head on. Furthermore, the repressive tactics of the Military Police continue to aggravate the situation by treating the public as military subjects, disrespecting democratic practices, and ignoring basic human rights. Settlers say the death toll is now up to five.

‘Housing is a Right’

‘Housing is a Right’ (Moradia é direito) is the claim of those involved in the Telerj occupation. For those camping on Avenida Presidente Vargas, this is an urgent one. However, the claims by the 8,000 ex-Telerj residents, as well as settlers from other urban occupations (9,000 residents are currently occupying an abandoned warehouse in Ramos; a factory was occupied in Manguinhos until mid-March; and, until February, 1,000 families occupied a disused factory in the Port region), suggests this is a much broader and more serious issue. 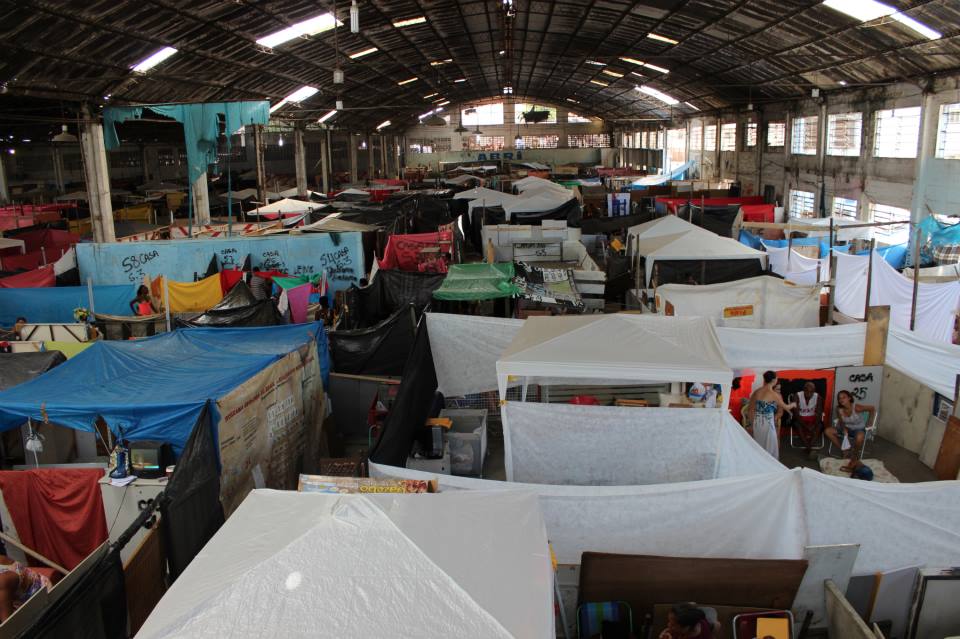 Mariana Cavalcanti, an anthropologist at the Getlúlio Vargas Foundation, suggests this phenomenon is not surprising: “People need to live in the urban center [near their workplace], but can’t manage it because the rents are so high.” She points out that occupations of disused industrial spaces in central neighborhoods is a logical response, and one that has been happening for 20 years. On the other hand, if a resident does get accepted to a social housing program it often means relocation to the other side of the city, according to Cavalcanti, which can be up to two and a half hours commuting time one-way.

Even in the case that registration of families on social housing programs ultimately produces housing for the thousands of recent homeless taking over abandoned buildings, there are increasing concerns about the delivery of social housing as a whole following claims that militias and criminal factions extort families in the Minha Casa Minha Vida program and control the transfers of cash to families receiving rent assistance.

Brazil’s historic conflict over centralized access to land and housing is perhaps playing out at its most extreme today in Rio de Janeiro. Elsewhere in the city, residents’ rights to housing are affected by evictions and the installation of Pacifying Police Units (UPPs), which often signal a rise in rents and its corresponding remoção branca (‘white removal’), a local term for gentrification.