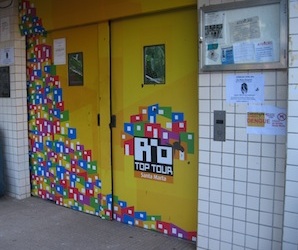 On August 30, 2010, the State Secretary of Tourism, Sport and Leisure launched a tourist attraction called Rio Top Tour in Santa Marta, Rio de Janeiro´s first pacified favela as of December 22, 2008. The idea of Rio Top Tour is to train residents to guide foreign tourists through their community to share and promote their proud culture and rich history. While the program itself is free for tourists, if you choose to hire a guide, a price is negotiated on an individual basis. As the Rio Top Tour´s one-year-anniversary is nearing, I decided to check it out.

Santa Marta is a community of 6,000 residents who built their homes on a very steep hill in the neighborhood of Botafogo. When I arrived at the base of the community, I found a small barraca in Praça Corumbá manned by two to three non-resident employees who spoke English well enough to give me a map, featuring 34 points of interest, and to send me on my way. I was told that if I wanted to hire a guide, I could do so at the last bonde stop at the top of the hill, but that I was also free to explore the community alone. When I got off the bonde I did not see any guides (who I assumed would be wearing the Rio Top Tour t-shirts), nor was I approached by any non-uniformed guides. So, being a geographer who loves maps, I decided to explore the community alone. I had also been previously assured that with the map in hand, there was no way I could get in trouble or get lost… 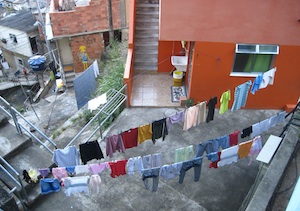 Owing to the lack of signs and poorly marked routes, the Top Tour Map came in handy several times as I weaved through the narrow walkways and down the steep stair cases on my way to see as many points of interest as possible. Despite getting lost on a number of occasions, I managed to see view points, plazas, churches, soccer fields, colorful houses, UPP headquarters, and the Michael Jackson plaza where the ¨They Don’t Care About Us¨ music video was filmed.

While most residents accepted the fact that I was a tourist simply walking around with no perceptible objective, it was clear that some residents were not as pleased. Although many people happily gave me directions when I was lost, due to the proximity of the houses to the public walkways I felt uneasy and out-of-place walking around this tight-knit community. I was also fearful that residents might mistake me taking a picture of their homes (as opposed to the view) while I was in an area where this act was not permissible. 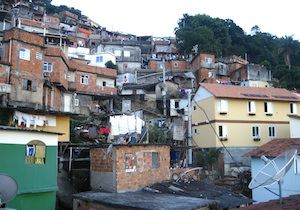 Poverty tourism is always a double-edge sword. In this case, while many people are happy to be accepted as part of the broader city, others are enraged that their homes and communities have become a tourist attraction. Although I am not at all a proponent of poverty tourism, I can appreciate that Rio Top Tour has, at the very least, an interesting approach. As opposed to individual guides and private companies reaping the benefits of tourists, residents are being given the opportunity to capitalize on the situation by becoming tour guides and selling their wares. My hope is that by this program´s second anniversary, more residents will be taking advantage of these opportunities.

Santa Marta is the first community to install the Rio Top Tour program, but other communities with UPPs, such as Morro da Providência, will be next.