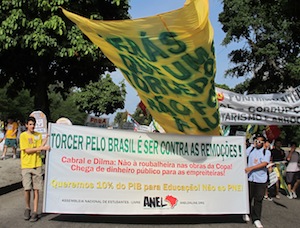 At the forefront of the march, people held a huge sign that read “Fora Ricardo Teixeira–Out with Ricardo Teixeira.” Teixeira has been in charge of Brazilian soccer for 20 years, and is viewed as inextricably linked to corruption and the commercialization of Brazil’s most popular sport and biggest passion.

The rally focused on the forced evictions occurring due to the mega-events, as well as the poor benefits government workers like teachers and firefighters receive, and fans’ rights. 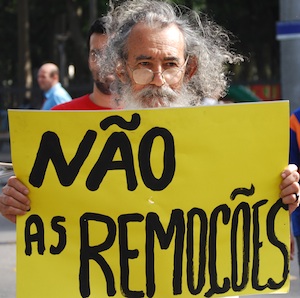 Many community leaders came out to voice their anger over forced evictions. Gizele de Oliveira Martius was at the march to voice her disappointment with how the government is treating people in the favelas.  “The government of Rio is removing people from their homes and putting them in areas far away from their original lives and work,” she says. “They don’t want us near where the sporting events or airport are out of shame, so foreigners don’t see.” This, she says, is unacceptable, as people living in favelas are a proud part of Rio and their opinions should be solicited in mega-event planning.”

“Our objective today is to show journalists here for the draw what is happening in Rio,” she explains. Once the hundreds of marchers reached Marina de Gloria where the draw was taking place, over 50 police officers were there to block off the entrance to the Marina. Though the police were following orders, one officer admitted he sides with the people participating in the rally more than with the government because “we too get paid little and feel shame at what the government is doing.”

Against police orders the majority of protesters crossed the coastal motorway of the Aterro do Flamengo before deciding to occupy the roadway instead.  They sat and traffic had to be diverted for almost 2 hours until a public official was sent to negotiate their pacific exit.  There was no police or protester violence while they awaited, chanting, “No, no, no to eviction! Invest our money in health and education!” 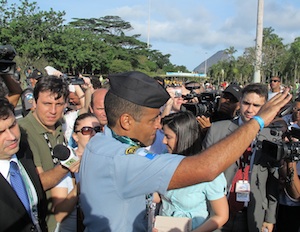 Finally, an official from the Ministry of Justice came forward accompanied by the police and several aids to listen to protesters’ concerns. Three representatives from organizations associated with the Popular Committee spoke, voicing concerns.  Principal among them was that there must be no evictions, except in areas where there exists  true risk to residents, and that even in these cases relocations would be local in nature. The official accepted the documents presented to him, as well as a large soccer ball with criticisms written over it, over 1 meter in diameter. He promised to take their concerns to the new office being charged to monitor the World Cup planning process. He agreed he would later get in touch with the protest organizers.  Protesters dispersed deeming the event successful, after a total 7 hour engagement.