For the original by André Balocco and Tássia Di Carvalho in Portuguese in O Dia click here.

Rio–A new law protecting favela residents from real estate speculation, such as that currently happening in Vidigal, was the principal proposal to come out of the 10th “Rio Without Borders” debate, held last Tuesday April 29 in Morro da Formiga. The debate discussed “Low Income Housing and Gentrification” with the idea for such a law put forward by Flávio de Oliveiro Ferreira, a member of the National Council of the Brazilian Institute of Architects (IAB). 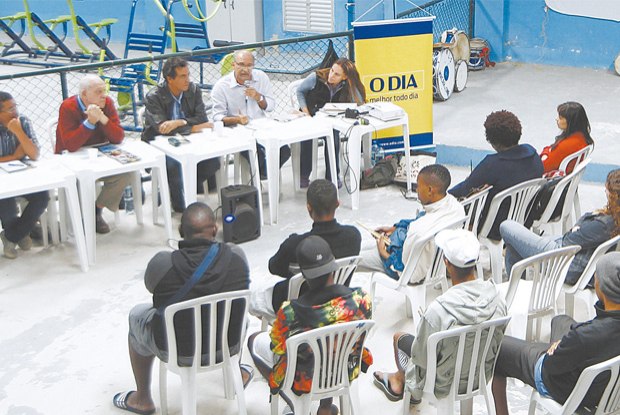 “Both the USA and England have specific laws to protect certain areas,” defended Flávio. “It is important to protect a favela as an area of low income housing.” Aside from Flávio, the debate also featured Theresa Williamson from the NGO Catalytic Communities, Jorge Barbosa from the Favelas Observatory, Marcelo de Silva, president of the Vidigal Neighbohood Association and Cláudio José from the group TransFormiga.

“As every favela has unique characteristics, the ideal would be to divide them in categories. The purchasing power of Rocinha residents, for example, is greater than that of Maré residents,” Flávio explained. The city of Boston, USA, was used as an example of a place where different districts receive tailored treatment. “There, the law is specific to each district.”

President of the Vidigal Neighborhood Association and one of the debaters on the panel, Marcelo da Silva, was pleased with the proposal. According to him, Vidigal has undergone an accelerated process of de-characterization since the Pacifying Police Unit (UPP) entered in January 2012. “I can’t stop residents from selling their homes thinking that pacification will end in 2016,” he said. “Today, there are parties on the hill that cost up to R$100 [to get in] and cause immense traffic jams. This is not for the residents.” In order to try and put the brakes on the change of profile of the community, a process known as gentrification, the community is holding a series of debates–the third happened this Tuesday. “Information is power. This we can provide so that nobody is sorry later.”

Jorge Barbosa, from the Favelas Observatory, agreed with the idea of specific legislation to protect the favelas. He also revealed that real estate speculation has already hit Complexo da Maré, despite the favela still not having a UPP–at the moment it is occupied by the army. “The announcement of occupation alone made prices soar,” he said whilst showing the front page of the community newspaper Maré de Notícias reporting that a studio apartment in Nova Holanda had risen from R$12,500 (US$5,600) to R$60,000 (US$27,000). “Those who leave the favela give up their relationships. And end up getting poorer.”

Another proposal that emerged from the meeting in Formiga came from Theresa Williamson from the NGO Catalytic Communities. She suggested a collective management of favela real estate ownership, or community land trusts. If this were in place, when someone wants to leave the favela they would sell the house to the collective who could then resell without speculation.

“In Boston and England, this idea is already a reality,” she explained. According to Theresa, the administration and acceptance of new members would depend on the decisions of a council formed of current residents. “They hold meetings to decide whether a potential resident would fit the community profile.”

Another alternative presented by Theresa was a price range for each category; those with a lower income would pay less rent, duties and taxes. She stated that the increase in electricity and water bills ends up with people being unable to remain in their community. “Another problem with the change in profile of residents is that those who stay lose their identification with the place.”

Theresa declares that gentrification is not a natural evolution in the process of urban housing. “It starts with speculation and ends with people who don’t want to sell their homes being obliged to leave.”

In order to stop the process, or at least try to control it, she suggests that favela residents become more informed about gentrification.

Theresa even proposes the government create alternatives to provide public housing for people with low income. She concluded “In New York, new buildings have to designate 20% of apartments as affordable with 10% of housing already public. In Singapore, the government currently owns 90% of all housing.”