The 2nd International Mega Events and Cities conference, less than two months before the World Cup 2014, took place in the heart of Rio de Janeiro’s busy downtown on April 27 to 30. The conference welcomed not only academics, but civil society organizations and students, all to form a four day dialogue covering subjects of human rights, urbanization, public policy, law, violence and security, accompanied by an insightful and very close up tour to the main site of discussion, the Maracanã Stadium which will host both the World Cup 2014 and the Olympics 2016. 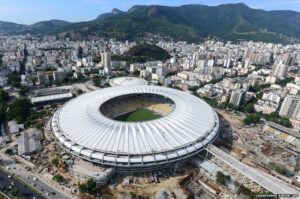 Run by an organizing committee led by Carlos Vainer, Professor at the Urban and Regional Planning and Research Institute at the Federal University of Rio de Janeiro (IPPUR/UFRJ), the conference opened with a clear message to the audience by Vainer: “There are winners, and there are losers in life, this is also in the same context as any soccer match during the World Cup. We are yet to determine who will win or lose between the government and the Brazilian people.”

Vainer spoke of the position adopted by President Dilma Rousseff in response to the widespread protests, acknowledging the ongoing activism by Brazil’s people and that this outpouring of energy should be used to the country’s advantage. Could this be an opportunistic line to recover a drop in popularity steering towards political victory for the elections in October? Rouseff has a clear focus: to regain power and host the two mega sporting events peacefully, followed by a transformed country. However the general consensus at the conference was that a peaceful and transformed Brazil is not likely in the foreseeable future, unless aggressive investments and forced evictions stop and people can live without fear of an increasingly militarized police force.

Mega-events and the development of urban space

The idea of mega sporting events as conduits for development has become a 21st century phenomenon. Countries that win a bid to host promote hope of building future benefits for their citizens. These benefits grouped together are then deemed the “legacy,” which may englobe intentions to strengthen the economy, employment, mobility and livable social environments. 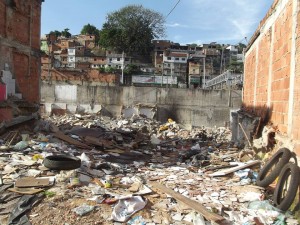 However in Brazil, any possible legacy benefits seem so far in the distance that people can barely imagine them. The mass social clean-up tactics are overshadowing any sight of benefit value from hosting the world’s most popular games. The events have been seen as a convenient motive to regain control and reform the rife inequalities of living and Brazil is, as every recent host country has done, promoting the legacy as leading to better livelihoods for all, irrespective of background. Yet state interventions in preparation for the mega sporting events are largely creating further disparities.

At the conference, many agreed that Brazilians are predominantly not supportive of the government’s current conception of urban development. The development of urban space currently underway in Rio de Janeiro was criticized. Cases of removals in areas that were labelled at risk was a prominent topic in panels on urbanization and evictions. The designation of risk was discussed as used politically in attempting to remove favelas from prime real estate locations.

James Freeman, a geographer and professor from the University of Concordia in Canada presented his paper “Mega Event-led Capital Accumulation and the Strategic Thinning of Rio de Janeiro’s Favelas” and stated that: “Everyone assumes that the favelas are all unlivable, but they are bound together by close community ties. [Favela residents] had no choice but to make life as livable as possible since the State turned a blind eye… Some of these evictions are corrupt, [looking] to gain the best areas in Rio de Janeiro.” 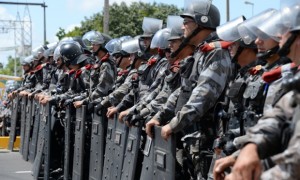 The most discussed topics at the conference were public security and violence. Many talks were led by students conducting research for their masters theses on topics surrounding the Pacifying Police Units (UPPs), military tactics and the Special Police Operations Battalion (BOPE). One woman researcher had researched police forces’ perspectives on the UPPs and maintaining long term peace. She said: “Federal Police Officers have shared their perspective with me and do not believe this is a sustainable solution. They do not believe any solution can be a quick fix in time for the World Cup, the Olympics or even into the foreseeable future, but yet they are not opposing it either.”

Dennis Pauschinger, a doctoral candidate jointly at the University of Kent and University of Hamburg, gave a presentation “Public security for whom? Cultural implications of the global security models of sport mega events at the Fifa World Cup 2014,” in which he affirmed that: “Global security is a huge market for these mega event games–a huge catalyst.” This point was also raised by Sara Koenders from the University of Amsterdam who gave a presentation on “Reconfiguring Insecurity: A Comparative Study of ‘Pacification’ and Local Governance in Rio de Janeiro’s Periphery.”

Researchers shared that favela residents they spoke to feel there is no one for them to turn to, given the corruption that can exist between drug traffickers and the police, with one saying: “It is hard for them to know who to trust. They are wedged in a war right now that they don’t want to be in.”

Additional research found that people were aware of the citizenship rights at stake due to the hosting of sporting mega events. The laws and public policies that generate profits from private security to ensure Brazil’s global citizenship could lead to more government control and less privacy.

Around the Maracanã Stadium 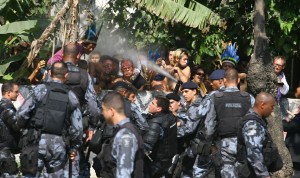 Conference participants visited the Maracanã site with a volunteer guide who lives close to the stadium and introduced the group to one of the most prominent examples of the Brazilian government’s mega-events policy: the forced eviction of the Aldeia Maracanã, an indigenous urban occupation since 2006 on the site of Brazil’s first indigenous museum. The residents of Aldeia Maracanã were violently evicted in March last year.

Our guide commented: “Many people believe it was one group that removed the indigenous residents, but it was a combined effort by [various military and police forces]. Their occupancy didn’t fit in with the “new image” that FIFA and the Brazilian government are hoping to develop. It is such a shame. Originally they wanted to turn this into an Indigenous Educational Institute and Museum. We now understand that it will be a museum to showcase the Olympics.”

The young tour guide went on to give his perspective on what it is like living near the development site: “Me and my neighbors cannot sleep at night from the noises coming from the constant helicopters hovering over the stadium. It is every night and they are too loud for anyone to sleep through. I’m praying every day that a military dictatorship does not return to Brazil, but this is the image the government is giving.” 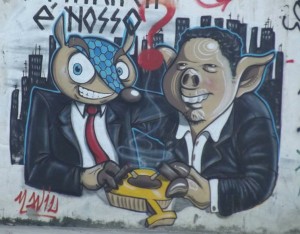 A symbolic reaction of people’s frustration could be found in the graffiti across the road showing the official Brazilian mascot and a pig representation of Ronaldo in suits flicking cigarette ash into the Maracanã Stadium.

The conference was informative on the broader issues arising from the coming of the World Cup and Olympics to Rio, and what issues could arise for future developments in Brazil and in future host countries. It also provided an opportunity to dive into the local effects being felt in Rio de Janeiro, the focus of both the sporting events and developments, and currently one of the most watched cities in the world.