For the original by Daniel Fonsêca in Portuguese on Carta Capital’s Intervozes blog click here.

Stereotyped representations, violation of communication rights and the need to increase the number of voices and subjects addressed by the media are just some of the communication problems related to the World Cup. 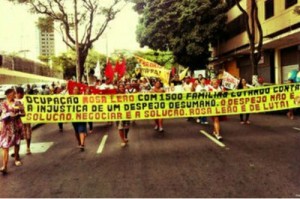 Human rights violations are ongoing in Brazil, justified by the need to maintain “order” and enable mega-events such as the World Cup and Olympics. There are two main issues highlighted by movements and activists who criticize these mega-events. The first is the forced evictions of thousands of families from their homes, close to 170,000 people across the 12 host cities according to the National Coordination of the World Cup Popular Committees (ANCOP). The second is the creation of emergency laws allowing the destruction of the most basic human rights, already weakened in the country, such as the freedom to come and go, to protest and of expression.

In this context, the defense of communication as a human right becomes indispensible to the social struggles of communities, favelas and traditional populations fighting for these rights. One recent example is the denouncing the constraints imposed by the army on journalist Camila Marins, cartoonist Carlos Latuff and photographer Naldinho Lourenço on the May 10 in the Complexo da Maré in Rio de Janeiro, a reality faced daily by residents.

According to Marins and Latuff’s account–the following is based on a written complaint made by both–when they noticed the beginning of a military action in which the army approached residents, they both began to photograph the event. Soldiers at once surrounded them. One of them, in an intimidating tone, asked, “Do you have authorization? Coverage is prohibited without authorization. You need to be taken to CPOR (Rio de Janeiro Reserve Officer’s Preparation Center) to explain your motives for covering [this] and ask for permission.” The journalists did not succumb to this pressure. They accused the soldiers of acting without legal grounds for sending them to CPOR or even asking for press coverage justification. One of the soldiers nodded and they were released.

The text finishes with a defense of communication as the basis for a democratic society: “Any type of impediment, obstacle or violence towards these professionals is an attack on democracy and the freedom of the press. The suggestion that one ‘has to ask for permission’ to practice journalism is a regression to the darkest times in this country’s history. Furthermore, it is the duty of the press to follow the actions of the State and report it’s respective wrongdoings to society. Based on the above, we request clarification from the Official Command of the Army, the Ministry of Justice and the Ministry of Defense concerning the attempt to restrict the professional practice.”

Those affected by the World Cup defend democratization of communication 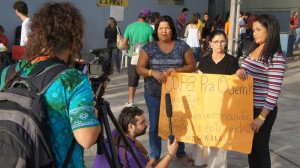 At the Meeting of those Affected by the World Cup, which included people whose rights have been violated by the Olympics and mega-enterprises, the democratization of communication was claimed as one of the movement’s priority issues on the charter approved at the end of the event. The document defends communication as a human right, criticizes the “oligopoly of the media” and denounces the press for reinforcing “the extermination of the black population and the criminalization of poverty.” Meanwhile, the text points out, “the real consequences of the FIFA World Cup in Brazil remain hidden.” 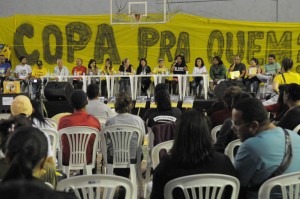 Aside from the invisibility of the negative effects of the World Cup, including 9 fatalities of workers in the construction of the stadiums, the participants criticize the stereotyped social representation of the residents living in communities affected by removals and of other activists who protest against the event. The Manifesto of those Affected finishes by arguing for the construction of a new regulatory framework for communications, including a revision of the legislation surrounding community radio “so that communication can be a human right, to vocalize the reality of the Brazilian people and so it can be diverse, popular and emancipating. We advocate respect towards media-activists and popular, independent press.”

The so-called “Cup of all Cups” is, in fact, arguably having effects on community journalism. According to the Brazilian chapter of the World Association of Community Radio Broadcasters (AMARC Brasil), in the case of free, grant-less community radio stations, the hosting of the mega-event “will bring more repression.” As previously reported on this blog, in official notices sent to organizations that work with community communications, the National Telecommunications Agency (ANATEL) announced that it will reinforce supervision to “ensure the viability of communications during the World Cup 2014.”

AMARC Brasil condemns the agency, saying that it “intends to silence the communication rights in the air for the ‘smooth’ operation of the mass media.” In response, the association has been promoting, since April 28, the campaign “Radio vs. Football – Who will win the Antidemocratic Cup?” The rules, according to the site, are as follows: every week, an author exposes the democratic shortcomings of football while another responds with criticisms of the radio. The initiative is open to participation and can be followed here.

Freedom of organization, protest and expression 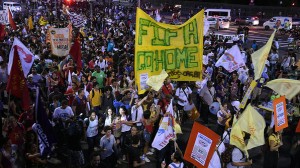 It is in the face of this range of issues that a set of formalized movements protested on May 15, 2014 (#15M), International Day against the World Cup, inspired by the National Meeting of those Affected by Mega-Events which happened in Belo Horizonte from May 1 to 3. Social movements and organizations, activists and people critical of the mega-events and mega-enterprises that violate rights took to the streets, according to an ANCOP spokesman, to protest against the various violations of the World Cup and Olympics in repudiation of all the processes that today are leading to the construction of increasingly exclusive and privatized cities.

However, the opposing side is prepared. With one month to go until the World Cup kicks off, an “exclusive” survey conducted by the army at the request of the G1 portal shows that, since the Confederations Cup in June last year, the Military Police have stocked up on “non-lethal” weapons. According to the article, “between June 2013 and April of this year, the public security sectors of Brazil bought more than 270,000 tear gas and pepper spray grenades and projectiles and over 263,088 cartridges of various types and models of rubber bullets.” This ammunition is enough to have thrown 819 gas grenades and shot 797 rubber bullets every day over the last 11 months.

The information also shows a clear increase in arms procurement due to the government’s fear of a new wave of protests during the World Cup. Since June 2013, the Military Police has acquired 113,655 tear gas grenades and 21,962 pepper spray grenades, the majority purchased in the first months of 2014. 134,731 gas cartridges of varying calibres were bought, which are launched from long range so police can avoid getting too close to the people. The National Public Security Secretariat (SENASP), an organ linked with the Ministry of Justice, made 3 separate orders of non-lethal arms, totalling 12,700 pepper sprays, as much in gel form as foam. The arsenal even includes bombs triple charged with tear gas.

Despite the threats, sentiments critical of the way the Cup has been organized in Brazil have grown, whether through rights violations or what it means in terms of political and budgetary priorities in a country with so many needs. Because of this, the call for protests on May 15 spread nationwide. In addition to a national act, there were protests in Rio de Janeiro, Brasília, São Paolo, Porto Alegre, Salvador, Curitiba, Vitória and other Brazilian cities and even Santiago in Chile.

Daniel Fonsêca is a journalist, member of the Intervozes Board of Directors and doctoral candidate at the Rio de Janeiro Federal University’s School of Communication (ECO/UFRJ)