Mayor Eduardo Paes announced last weekend the purchase of land from the ex-Telerj/Oi settlement in Engenho Novo in Rio’s North Zone. The announcement came during the inaugural ceremony of the final 740 public housing units completed in Bairro Carioca, the Minha Casa Minha Vida complex in Triagem, also in North Zone. Minha Casa Minha Vida (MCMV) is the federal program through which Rio has been constructing thousands of apartments for low-income city residents.

According to Mayor Paes, the city will purchase the land after more than two years of negotiations, though the deal has not been finalized and details on the agreement have not been disclosed. The city plans to construct between 1,200 and 1,300 MCMV apartments at the site. Like other MCMV properties, the apartments are intended for families with monthly incomes of less than R$1,600 ($720 USD). 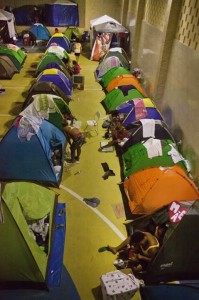 The Oi site, also known as the abandoned Telerj complex, was the site of a contentious occupation of nearly 8,000 people in April. Thousands of families moved into the buildings and erected makeshift shelters. While the occupation was initially peaceful, a confrontation between the residents and Military Police ensued when police began to evict residents and remove the homes after two weeks. Police reportedly used pepper spray and rubber bullets, did not allow residents to collect their possessions, and violently pushed residents down stairs.

Residents were not relocated by the government, and instead were forced to camp out downtown without food, water, or access to shelter. A group of occupants later camped out in front of the City’s headquarters for over a week demanding assistance before being expelled by the police. Government officials were criticized for their inadequate responses to the residents as well as for the excessive force used by the Military Police. Police officers reportedly killed five people during their confrontations with community members.

Negotiations began last month between city and state officials and representatives from the community as well as the Human Rights Defenders Institute (DDH). Some residents expressed a desire to join the MCMV waitlist and are currently staying at a church shelter on the Ilha do Governador after being expelled from the city’s downtown cathedral. Others returned to their previous communities or are staying with relatives.

The Mayor, along with Municipal Housing Secretary, Pierre Batista, announced that the families will be added to the waitlist for the MCMV apartments to be constructed at the ex-Telerj/Oi site. However the situation of the hundreds staying at the church in Ilha do Governador, far from the city’s center and the media spotlight, remains urgent.

Paes and Batista emphasized the city’s dedication to providing public housing for low-income residents during their speeches, adding that the additional MCMV units will help improve the lives of thousands of people for years to come. The city has completed public housing units for 400,000 families since the implementation of MCMV in 2009, but has a remaining 148,000 units to construct by 2016.