Nestled high up on Alvorada hill, right below a portion of Complexo do Alemão’s photogenic but controversial cable car, Barraco #55 is a community-oriented center for arts and research. As well as hosting regular events such as concerts, workshops and exhibitions involving residents, the center also offers accommodation for visitors wishing to experience Complexo do Alemão. 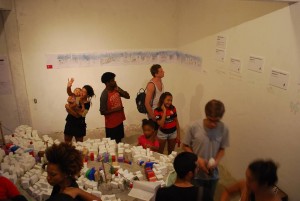 Barraco #55 is managed by Dutch writer and researcher Ellen Sluis and musician Eddu Grau, born and raised in the neighborhood, and is a display of the vibrant identity and the cultural wealth, globally underestimated by the general public, that lies within the Complexo do Alemão–an area unfortunately still stigmatized for drug gang violence and the military occupation in November 2010. The center aims to promote the cultural qualities of the favela to visitors–including surprising art forms, a potential for sustainability and a strong sense of community–breaking common stigmas about the neighborhood and consequently reducing the psychological distance separating favelas from the “asphalt” or formal city.

The exhibition “Favela, vôce mesmo faz!” (Favela, you make it yourself!) opened at Barraco 55 on Sunday, April 13. Focusing on the use of public and semi-public space in the local communities of Alvorada, Itararé, Morro do Alemão and Nova Brasília, the exhibition questions the use of available space and suggests possibilities to optimize these public places, often considered too rare in the dense environments of Rio’s informal settlements. 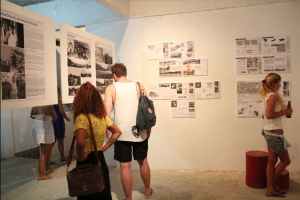 The event is named after favelas’ notable capacity for self-build and to stimulate local interaction with the exhibition by providing suggestions about future implementations in their urban environment. As such, the exhibition aims to raise community awareness about the undergoing urban evolution of Complexo do Alemão. Ben Stokke, an architecture student from United States, resident of Barraco #55 and co-organizer of the exhibition, explains: “We want to know what changes the community feels are necessary and beneficial for the people, [changes] that can make Complexo do Alemão healthier, happier, safer, and a better place to live.”

For this remarkable showcase, Ben partnered with Dutch urban planner Manoe Ruhe, also resident of Complexo do Alemão, to do research-based work including creating a model made of concrete and recovered materials of the Rua da Assembléia, a major circulation axis in the community, linking important nodes and offering high visibility to the local businesses it hosts–on which their work partly focuses.

“One side of the street has many entrepreneurs and on the other side is a lot of (potential) public space. Also, since the construction of the cable car, the government already demolished buildings in this street to renew the area, but nothing has happened [with the space] yet,” tells Manoe.

On the model, areas where spatial flexibility is more obvious are highlighted. Residents and visitors are invited to express their suggestions for the use of each spot by writing their ideas on some of the room’s originally blank walls. One month after the exhibition’s inauguration, two wall surfaces were filled with writing from contributors of all ages. The most popular suggestions are requests for more green spaces, street hygiene as well as health and sanitation infrastructure. 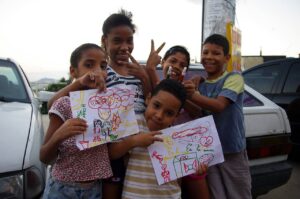 Another interactive aspect of the exhibition consists of asking children to draw their ideal image for Complexo do Alemão. The results have been surprising in expressing an appeal for peace, love and tranquility. These wise and aspirational words have been written on the vast majority of the collected drawings by Alemão’s younger generations.

The views of older residents, some belonging to the first generations to have settled in parts of Complexo do Alemão, are also featured in the exhibition. Their stories tell of the speed at which the favela complex has expanded and densified during the last decades. Some expressed criticism over the way Alemão has evolved, for example 71 year old Luciano Batista Dos Santos says, “It was better back then in all senses, much better than it is today.” Others expressed the inevitability of the urban transformation of the area. “Progress is unstoppable,” states Mr. Florindo in his portrait, aged 83 and resident of Nova Brasília for 70 years.

Further transformations are due in the area as there are plans to enlarge the Rua da Assembléia under the Growth Acceleration Program (PAC). The project will require the demolition of entire rows of buildings, removing residents and local businesses to create a wider lane, which according to the state will facilitate the flow of traffic and police control.

However, the PAC has long been criticized for being more monumental than genuinely beneficial for the communities, which in most cases need public services to facilitate social integration, with priorities placed on efficient sewerage systems. Complexo do Alemão’s 3.5km cable car can be cited as an example. The cable car is still failing to meet the performance announced by the government, while its construction led to inefficient or dead spaces at the bottom edge of its pylons and around its five stations. These spaces could be given social purposes, as the existing public spaces are used as dumps and parking lots. Proof of the demand for such spaces can be found at Barraco 55’s exhibition itself, which has become a playground for local children. As Manoe describes, “When the exhibition opened, a lot of children came in to play. It is amazing for them to have such a big (public) space to play in. Which again proves there is a big shortage of possibilities to play on the hill.”

Consequently, how to deal with the neighborhood’s unused spaces to make sustainable, community-oriented areas is the other main question the exhibition looks to address, featuring work developed by participants of “The Case of Unused Spaces in Complexo do Alemão” workshop as part of the International Seminar of Innovation and Urbanism in October 2013. Ben and Manoe’s proposals promote a greener neighborhood encouraging urban agriculture at different scales, increasing shading and reducing the heat island effect while providing sustainable food resources for the community. 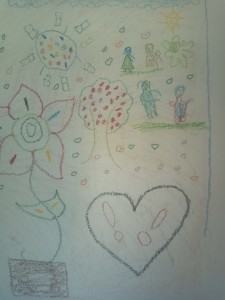 As well as exploring the issue of public space in dense communities, “Favela, You Make It Yourself!” proves to be a very important exhibition in the experience it offers to both vistors from outside Complexo do Alemão and for local residents.

Visitors to Complexo do Alemão most commonly visit via the cable car, which has a single trip ticketing system, (R$5 for visitors and R$1 for residents) which means tourists generally only stop at the end of the line, where a small public space surrounding the Palmeiras station hosts food and beverage kiosks and affords a spectacular view on Rio’s central and northen zones. This concentrates most of the touristic activity of Complexo do Alemão, limiting the visitor’s experience of Alemão to a self-contained viewing area, distant from the actual vibrancy and activity present throughout the favela. At the exhibition, visitors gain much greater insight and proximity to the life of Alemão, including through the photographic works of Dutch photographer Martin Dijkstra, capturing scenes from everyday life, and through Ellen Sluis’ short film “Prato do dia” (Dish of the day) about the daily issues of garbage disposal in the neighborhood.

Crucially, residents visiting the exhibition are invited to participate in creating a collective vision for Alemão’s public spaces. It also raises awareness locally of the coming urban transformations the communities are set to undergo under the PAC. “As we see these urban amenities being implemented in Complexo do Alemão, it is critical that the community is prepared to concisely communicate its demands. This area is changing and I think it is important that people living here invest time thinking about how and what improvements might be best for the greater whole and for future generations,” explained Ben Stokke.

Initially scheduled until May 15, the exhibition “Favela, You Make It Yourself!” has been extended until May 29, opening on Fridays from 5pm to 10pm, and on Saturdays and Sundays from 3pm to 7pm. For more information visit the Barraco 55 website.