In a country that has seen the number of cars more than double in the last decade, and in what is now Brazil’s most congested city, Rio de Janeiro’s four planned BRT (Bus Rapid Transit) lines are referenced as the critical strategy in reaching the city’s goal to increase total trips taken on high-capacity public transportation from the current rate of 18% to 60% by 2016. Funded as part of the 2016 Olympic “Legacy Projects” intended to serve Rio long after the Games, the transportation system is already a source of much controversy.

The original BRT system was pioneered in the Brazilian city of Curitiba in the 1970s. BRT is characterized by dedicated bus-only lanes, fares paid off-bus, elevated bus stations flush with bus doors, high-capacity vehicles, and frequent service–all of which combined significantly reduce inefficiencies that add to travel time. BRT systems are known to offer many of the efficiency benefits of rail transport at a fraction of the cost. World Resources Institute program Embarq describes BRT as a “low-cost sustainable urban transportation solution,” and collaborated with the city government on Rio’s lines. Curitiba’s model has inspired 160 cities around the world to adopt BRT, with lines currently being implemented in Brazilian cities including Belo Horizonte and Porto Alegre.

In Rio, there are four lines planned and in different stages of development. The TransOeste runs 57km between Santa Cruz, West Zone and Barra da Tijuca and was inaugurated in June 2012. The 39km TransCarioca line connecting Rio’s international airport and Barra da Tijuca is slated to open before the World Cup next month. While city government officials said in March that the TransCarioca was then 88% complete, they also said in April that the project’s expense is now estimated at R$1.9billion, running 46% over the initial budget of R$1.3 billion, as reported by The Rio Times.

The TransOlimpica will run 26 km from Deodoro, North Zone, to Barra da Tijuca. However, the exact route remains unclear. Finally, the TransBrasil will link Deodoro and Rio’s domestic Santos Dumont Airport near downtown Rio. This final BRT line is planned as 32 km including express corridors along Avenida Brasil (a main transport artery), with a 900,000 daily capacity. Both routes are expected to be in operation for the 2016 Olympics, yet Rio’s lack of preparedness for the Games means much doubt remains. Work on the sporting site at Deodoro is yet to commence and a court order in January suspended bidding for the first set of construction works on the TransBrasil.

Criticism of the BRT system in Rio

Despite the growing popularity of BRT in global urban development, there remain questions about Rio’s system and the way the city government is carrying out the project. Gabriel Oliveira, a researcher for ITDP Brasil (Institute for Transportation & Development Policy) says that Rio’s BRT could, if planned correctly, constitute an effective system choice for historically transit impaired districts. Chris Gaffney, a professor of urbanism at the Fluminese Federal University, says that the chosen routes for the BRT lines are not a solution for Rio’s dire transportation needs. Gaffney references a 2003 traffic study that showed how all of the major daily flows in Rio come from the North and West to downtown, South Zone, and part of the North Zone, which together concentrate 60% of Rio’s formal employment sector. Instead of building mass transportation to serve this need, all of the BRT lines run through the Olympic ring of Barra da Tijuca, the center of real estate speculation in Rio.

Mayor Paes said at a recent debate that the BRTs would improve mobility for the urban poor in the North and West zones. On that note Gaffney agrees, but their publicly-expressed views end there. “For me the only logic that would justify [the BRTs] is to bring poor, relatively immobile people to Barra to work for the expanding upper-middle class,” says Gaffney. “It is a geopolitical strategy to fragment the city on the one half, isolate people on the other half, and to funnel them into a place of abundant informal sector employment.” 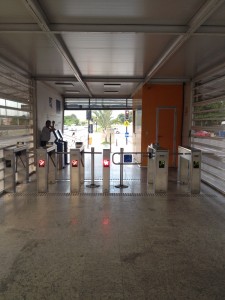 Gaffney argues that BRT will also end up doing the opposite of one of its main goals: getting people out of their cars. “BRT maintains a dependence on wheel-based transportation. If you look at the TransCarioca line, in addition to the BRT lane they have expanded car lanes from four to six.” Not only will this expansion of lanes lead to increased congestion, it is also a serious safety hazard. Many sidewalks along BRT lines will be shortened from a width of 3 to 1.5 meters in order to meet capacity targets, for which there needs to be a high speed bus passing in either direction every 15 seconds, says Gaffney.

Accommodation for cyclists is also a concern. “Poor pedestrian accessibility leads people to walk or bike in the bus lanes, or cross in conflictual areas,” says Oliveira of ITDP Brasil. He commends the availability of bike-parking facilities at the BRT stations, but laments the lack of integrated bike lanes and protective infrastructure for cyclists. Eight people have already been killed by accidents on the TransOeste, Rio’s first BRT line to be inaugurated.

Construction of BRT lines has led to the eviction and displacement of entire communities, including Largo de Campinho, Vila Harmonia, Restinga and Vila Recreio II. In 2010, Gaffney estimated a total of at least 10,000 homes, businesses, and public spaces would be forcibly removed. There have already been thousands of removals, with two more lines not even begun. In the case of Recreio II, the vacated land has sat unused after city authorities deemed the uprooting of the community necessary for the TransOeste. Those displaced now deal with much longer commutes from the distant Minha Casa Minha Vida apartments they were moved to, all for a project that’s supposed objective is to improve urban mobility.