Since the decision of the Federal Minister of the Environment, Izabella Teixera, in May last year to redefine the limits of Rio’s Botanical Gardens and remove 520 families from Horto, residents have actively fought for their community to remain. The SOS Moradores do Horto Facebook page has almost 4,000 members who follow updates on actions, the history of the community and the resident’s cries to the federal government. Horto residents have been able to effectively use social networks to rally support, bringing different generations of the community together. Many of the younger residents now attempting to share Horto’s situation with the world grew up hearing stories of the early days of the community. 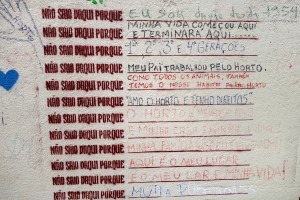 Horto is situated behind the Botanical Gardens, and its development coincided with the creation of the park itself, founded in 1808 by King John VI of Portugual. Functionaries of the gardens were given or permitted to build housing in close proximity to the gardens. In the same area, there are other public bodies and institutions such as SERPRO (Federal data processing service), Light electricity utility, a municipal school and a regional tribunal court. The area around the Botanical Gardens was never regularized, but there was coexistence amongst the residents of Horto, institutions and the surrounding wealthy neighborhood. This coexistence was peaceful until the 1980s when repossession actions were proposed which attempted to remove a third of the families from Horto. Legal actions were taken against the Horto community by others who desired the land. In light of other laws, regularization became an obligation of the state. The federal government began a program to regularize Horto, a community of 620 families of which 339 have a head of family that is elderly, working with community and Rio’s Federal University (UFRJ) to design a program and map the community. However since the ruling of May 7, 2013, long-time residents have worked with younger residents, rekindling the fight for their right to stay.

What does the community of Horto mean to residents?

With threat of eviction, many residents of Horto have reflected on what the community means to them. Ismael, a 76 year old resident, pronounced, “For me it’s everything because I was born here. I am getting old here.” Ismael reflected on his early impressions of Horto saying, “When we were children, it was paradise here.” Like many other long-time residents with close ties to the Botanical Gardens and Horto, he was shocked when eviction was proposed. When asked about the community’s meaning, another long-time resident Ivone responded, “It’s my life. I was born in this house 80 years ago, in this house.” Several residents reiterated Horto as the basis for everything they know and love. 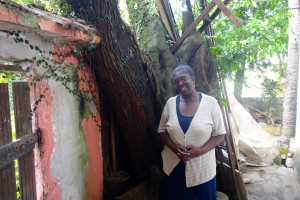 Two other long-time residents, Regina and Emilia, spoke proudly about their community and its significance to them. Regina remarked on what Horto means to her through the roots she has established in the community: “I was born here, grew up here, married here and I have lived here for 57 years, I have five kids. I raised them all here, my grandchildren live here too, so this is a very important place for me. It’s what a valued place means, a place where you can raise your kids as you like, this means everything for me.” Emilia, the head of Horto’s neighborhood association has lived almost her whole life in the community. She said, “My life history is here. Here I have my family, I raised my daughter, I’m raising my grandchildren, I have friends. Of my circle of friends, the majority are in Horto, and Horto is part, well is my life to be honest.”

What is the message to the federal government?

As passionately as residents expressed their community’s meaning to them, they articulated their messages for the federal government. Many residents argue that the city would be better off housing people who are experiencing homelessness rather than removing residents from functional homes and functioning neighborhoods. Ivone’s message for the federal government is that, “They should hear out the people who are in need. Don’t occupy what is already occupied, and well-occupied. There are so many people needing shelter. Why don’t they work for these people? Let us stay here. Stay how we are.” 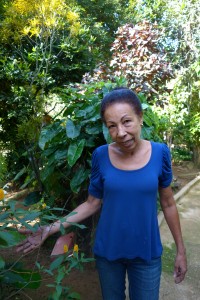 Two residents referred directly to the government’s existing public housing program Minha Casa, Minha Vida and how it has its been used as a tool of involuntary displacement rather than housing people in genuine need. Emilia urged that the government stop “the practice of removal. The government has one of the best programs yet presented to the population with Minha Casa, Minha Vida. It was created to provide housing for people who don’t have housing. Now it works as an instrument to remove the community.” In a similar vein, another long-time resident Neuza pronounced that, “there are many people needing a house. We have our house that we love. My message is that instead of Minha Casa, Minha Vida, that our house here is our life, and that’s my message.”

In addition to identifying the problems with the federal government’s housing policy, in expressing their protests to the government they underlined their love for their community and right to stay. Regina said “We are dignified people… we are people who work, we have our rights. I hope they make a resolution that doesn’t prejudice us.” The residents of Horto who have developed considerable roots in their community urge that the government think of human dignity and Horto’s significance to them before taking action.

In a new letter from the head of the neighborhood association, Emilia Horto de Souza, to President Dilma Rousseff, the community articulated its objections to involuntary removal. In the name of the community, Horto has filed a formal request for the federal government to concede the right to the concession of special use for housing, under the MP 2220/2001 law and grant titles. Emilia wrote, “How can the federal government recognize [the right to housing] and justify the mass removal of these families? We still cannot understand this, for the right to housing should be recognized in the local area and there is no conflict between the environment and housing, because the area of residences is a ‘piece of the City.’ There will be clear damage to the environment if homes are demolished; given the amount of debris that will be generated as there is heavy infrastructure in place (power system, water, sewer, roads), it will have a huge environmental impact.” She also noted that the federal government’s reasoning for removing the Horto community, impact on the environment and better potential use for the space, is faulty as other groups that use the area have a larger impact. She ended the letter by saying, “us residents of the Horto community are a part of this environment, so we can not be radically excluded from it.”