The soccer matches of the People’s Cup final began around midday on Sunday June 8 at the top of Morro do Pinto in the Port Region of Central Rio. The People’s Cup is a soccer tournament of participants whose rights have been violated by sporting mega-events. The organizers of the championship are the Popular Committee on the World Cup and Olympics, in partnership with the National Association of Women’s Football. The goal is to join communities and groups striving for their rights and to give visibility to the rights violations occurring as a result of Rio de Janeiro hosting the World Cup.

Two women’s teams, both linked to Criciúma, and three men’s teams played Sunday afternoon. The National Front of Soccer Fans was busy all weekend with debates about the World Cup, so they were replaced by the runners-up from the Santa Marta event: the Popular Committee for the World Cup and Olympics. The other two men’s teams were from the communities of Salgueiro, known for its samba school, and Providência, the oldest favela in Rio. 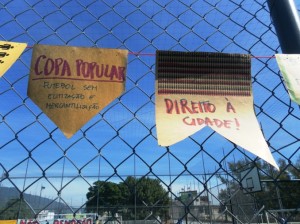 All of the players wore t-shirts expressing the objectives of the Popular Committee: “Cup in the street for rights;” “Public and popular Maracanã;” “Out with the FIFA mafia;” “Rights for street vendors;” “End the military occupation of favelas.”

The Popular Committee announced that the day is a playful moment but that the t-shirts and banners remind us that many people are excluded from the World Cup. They have recently published an important report on human rights violations and put a spotlight on social problems in Rio de Janeiro. Eduardo Tacto, member of the Popular Committee and president of the National Association of Women’s Football, says that Brazil is the country of football; but that the sport should be managed with transparency and should not lead to evictions.

The People’s Cup took place in 2013 as a one-day event. This year’s edition took place in several stages in different communities to show that the repercussions of hosting mega-events are widespread and systematic in Rio de Janeiro. The approach has helped raise awareness of what is happening in other parts of the city. 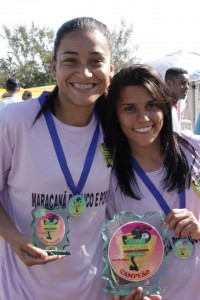 Both of last year’s People’s Cup winners proved victorious again: the Criciúma veteran women’s team and the Providência men’s team. Aline, Criciúma’s n°10, was named the best overall player of the tournament. She stays humble about her footballing talent and rather talks about the issues underpinning Sunday’s event. She said that the day helped unite people, whereas the World Cup is only for the wealthy.

The contrast between the People’s Cup and the FIFA World Cup sheds light on the problematic issues surrounding soccer in Brazil. Dominique, n°7 in the Criciúma junior team, mentions that women’s football is less visible than men’s football and that she takes part in such events to inspire other girls to play. She also says few Brazilians can afford to enter the stadiums; that the World Cup is not for Brazilians, but rather for foreigners with more money to buy tickets. Dominique says that there are other priorities in Brazil, such as health and the support for social projects in communities, which are more important than investing in elite football. 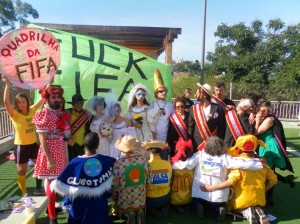 During the afternoon, the sound system played music to encourage the teams. People chanted “Não vai ter copa” (There will be no World Cup), and a stand printed t-shirts denouncing the abuses surrounding mega-events. Later, a band played songs related to the police violence favela residents face, such as ‘Rap das armas’ and ‘Rap da Felicidade.’ Morro do Pinto is situated in ‘Little Africa,’ a historically significant part of Rio de Janeiro for Afro-Brazilian culture. After the football games, festivities reinterpreted Brazilian cultural heritage to mock the World Cup organizers, through a carnival atmosphere and the quadrille dance of the Festa Junina, to celebrate the ‘marriage’ of the Brazilian government, FIFA and corporate sponsors.

Pedro, a member of the People’s Committee, says that Sunday’s event carries different values than those proposed by FIFA. He hopes that citizen participation and mobilization in the streets for social causes will continue during the World Cup.