On Saturday August 23, staff from Jornal O Cidadão (‘The Citizen’ Newspaper) distributed copies of the newspaper across the sixteen favelas that form Complexo da Maré in Rio’s North Zone. They handed out some copies directly to people they met on the street and in stores, while stuffing other copies under doors where nobody was home.

“By distributing the newspaper from house to house…we can get immediate feedback on the content,” explained Gizele Martins, the newspaper’s managing editor and resident of Maré. “We get a sense of whether the residents like the articles, don’t like the articles, have criticisms, don’t have criticisms… if they have questions, if they have complaints.”

O Cidadão staff read articles directly to community members who cannot read. Community schools also receive copies so that teachers can incorporate them into class assignments. The paper, which comes out every three or four months, is always distributed for free.

O Cidadão’s interactive distribution model differs significantly from that of most other newspapers, but then the community newspaper as a whole functions differently from other media platforms. It intentionally seeks to fill the gaps in external sources’ coverage of and interaction with Maré. Mainstream media journalists bring the “stereotypes and preconceptions” that still pervade Rio society, Martins argues, before continuing: “I believe the role of community media is to break this.” Furthermore, she suggests, community media are simply better at covering issues related to favelas. The people who live in Maré are best situated to tell the stories of Maré.

When it was founded in 2000, as a project of the local NGO Centro de Estudos e Ações Solidárias da Maré (CEASM), O Cidadão’s main focus was on exploring and creating a local identity across Maré’s sixteen favelas. It sought answers to questions such as ‘What is a favela?’ ‘What is the favela in Maré?’ and ‘What is the Maré identity?’ The newspaper invented the term Mareense to describe someone or something from Maré in an effort to create a shared sense of membership in the community. To answer their founding questions, the newspaper focused on everyday local culture, detailing the history of a bakery or telling a local fisherman’s story.

The project isn’t easy to maintain. Journalists are all volunteers. Some are not only responsible for reporting and writing, but also for editing, administrative tasks, and O Cidadão’s community journalism course. Some of the current ten staff members hold other jobs simultaneously. While the majority are residents of Maré, some contributors come from other favelas in Rio and even the greater metropolitan region. Travel costs add up even for local staff members, as they need to pay for buses to cover happenings all across the expansive territory of Maré, while basic supplies such as official paper and pens can strain the newspaper’s finances. The team is fortunate to maintain a good working relationship with CEASM, which provides a one-room office in its Maré headquarters and covers lighting, Internet and telephone costs.

Since 2012, one of its most exciting projects–the community journalism course–has served to renew O Cidadão’s team with trained and passionate people. The 2014 course will start in September and will last about three months. Courses covering a range of media, from written reports to video and radio, are taught by O Cidadão staff and previous years’ students, such that a sustainable cycle of students becoming teachers drives the course forward each year.

The importance of training people in a variety of media is clear from the variety of platforms O Cidadão employs. Since many Mareenses do not have a computer or phone with Internet access, the printed newspaper remains the newspaper’s core format for reaching local residents. However, O Cidadão’s blog, Facebook page and Twitter feed grow their audience beyond the physical boundaries of the favela. The website publishes stories much more regularly than the printed paper, reporting on events as they happen. Martins believes the majority of people reading O Cidadão’s website are young people from outside of Maré, while young people from within the favela complex engage through the printed newspapers distributed in schools and the Facebook page.

Around 2010 the newspaper began shifting its focus towards human rights issues. Following a number of fatal shootings in Maré, the team “felt the importance of shifting topics,” explains Martins. “The killings and violence were a result of the fact that the government did not see the community’s physical spaces or residents as a legitimate part of the city. They only saw us as being on the margins of the city.”

O Cidadão staff noticed that other newspapers suggested young victims of shootings were involved in drug trafficking, in cases where community members knew that to be false.

While mainstream news at times reported on the deaths, they failed to ask the questions that were so pressing to the residents of Maré: “Why is there so much war in Maré? Why do we deserve this life?” From the O Cidadão team’s perspective, residents are portrayed as violent, when they are actually governed by violence; they are portrayed as criminal, when they are actually criminalized. So stark were the discrepancies between the mainstream and local perspectives of favelas that Martins describes O Cidadão’s shift towards human rights as a “necessity.” 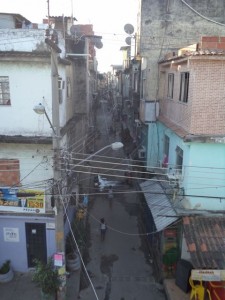 Now, in the wake of the World Cup and as Rio prepares to host the 2016 Olympics, O Cidadão is still focused on deliberately asking the questions other media outlets gloss over. Martins points out that many Brazilian and international journalists reported on forced evictions and police occupations taking place in the lead-up to the mega-events, but they still failed to ask the deeper questions that favela residents are desperate to understand: “A newspaper reports that a favela will be occupied because of the World Cup. But nobody is speaking about why the favela will be occupied because of the World Cup… nobody is questioning why the people of Maré deserve so much war.”

The strategy going forward in the build-up to the Olympics, then, is to continue pushing these questions into as many spaces as possible. O Cidadão staff plan to not only use their own print newspaper, website and social media platforms, but also put forward articles for mainstream media and engage in debates, interviews and street protests, making use of all available channels. In this way, their community media outlet serves as a reliable source of information from within the favela, whilst actively engaging people outside of the favela too.