Brazil’s colonial past has created a socio-political landscape in which issues of race and ethnicity remain problematic. Today, indigenous and black groups continue to resist the discriminatory social order left by the colonial encounter. Brazil’s 1988 Constitution, and international instruments such as the ILO Convention 169, ratified by Brazil in 2002, offer protection to indigenous peoples and quilombola groups. These laws form a framework through which such groups organize autonomously to decide their futures. However, legal provisions do not easily translate into policies that improve these groups’ socioeconomic situation, making the implementation of Constitutional rights a continuous struggle. The lived struggles of ethnic groups in the city provide a window into persisting ideas on race and ethnicity, which hinder their recognition as ethnic groups.

Rio’s Urban Quilombos: Culture and Resistance in Sacopã and Pedra do Sal

Colonial Rio de Janeiro, as a major slave port, was the site of a great number of quilombos, some of which still form part of the city’s landscape and geography. As Brazilian scholar and activist Kabengele Munanga explains, quilombo is a word of Bantu origin, a language family spoken by peoples located between what is today the Democratic Republic of Congo and Angola. The word was taken to Brazil during the period of formal colonialism through the forced migration of African slaves. Quilombos are today not only a historical fact but a socio-political reality in the country. They are popularly represented as rural communities of runaway slaves, who have remained in their territories since the abolition of slavery–epitomized by the most famous, Quilombo dos Palmares. However, this colonial and narrow definition fails to grasp the complex and dynamic realities of Brazil’s contemporary quilombola groups. In fact, quilombos emerged wherever African slaves were, in urban and rural contexts, as well as in other countries such as Colombia or Ecuador.

The outcome of the mobilizations of Brazil’s black movement in the context of re-democratization was Article 68 of the Transitory Provisions of the 1988 Constitution that guarantees quilombolas the right to titles of their land. In 2003, Decree 4887 named the National Institute of Colonization and Agrarian Reform (INCRA) responsible for the demarcation of quilombola lands. Since then, the required anthropological report for the titling process has set off significant research in the broadening of the concept of quilombo, as consolidated by the 1994 definition of the Brazilian Anthropology Association:

“Today, the term refers not to residues or archaeological remains of a temporal occupation or of biological evidence. Nor are quilombos isolated groups or a strictly homogeneous population. Likewise, they were not always the result of rebel or insurgent movements, but mainly consist of groups that have developed practices of resistance in the maintenance and reproduction of their characteristic ways of life in a determined place.”

It is as such that one should understand Rio de Janeiro’s urban quilombos, namely Sacopã and Pedra do Sal. They are respectively located in the upper-class neighborhood of Lagoa (alongside the Rodrigo de Freitas Lagoon in the South Zone) and in the city center by the Port region. Both are still in the long and bureaucratic process of land titling. After years of fighting to obtain their land legally, urban quilombos carry an important message of endurance for other groups resisting displacement and eviction. 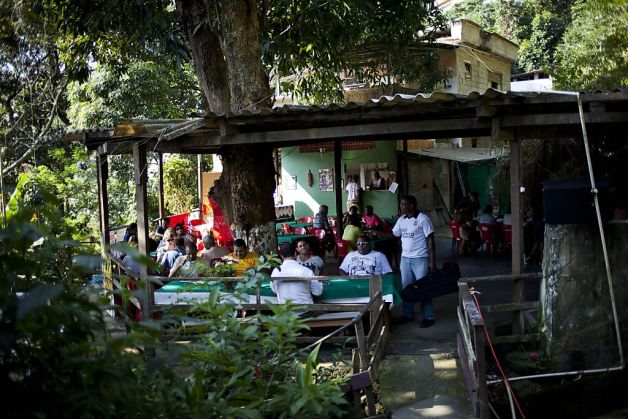 What these urban quilombos share is their importance as spaces of black resistance and samba. Sacopã became famous for its samba and pagode parties in the 1970s and 80s. The members of Pedra do Sal were protagonists in the creation of samba itself, and schools such as Império da Tijuca. Pedra do Sal also holds historical and contemporary significance for Rio’s port area and Candomblé terreiros (Afro-Brazilian religious sites), having been recently recognized as an area of cultural protection.

Both these communities bear witness to the historical presence of blacks in neighborhoods today disputed by real estate speculators and are located in areas that have undergone complex processes of gentrification and whitening. During the aggressive policy of favela removals during the military dictatorship in the 1960s and 1970s, Lagoa’s landscape radically changed with the forced removal of communities such as the Favela da Catacumba–today Parque da Catacumba–and Praia do Pinto, today the Selva de Pedra condominiums of Leblon.

Today, Lagoa is an upper-class neighborhood. The port area, where Pedra do Sal is located, is part of a redevelopment and revitalization project that has significantly increased the real estate value of the surrounding area. In this respect, economic interests have translated as racial discrimination. Both quilombos have thus incessantly resisted attempts at removal and not without losses. As such, whilst the area around them has gradually whitened, the quilombos have remained a physical reminder that resistance is possible.

Their identity as quilombos was central in their success to date. Due to their determination to stay where they have been for generations, their cultural identity and the possibilities afforded by Article 68 and Decree 4887, they were able to gain recognition for their legitimate right to the lands in a context of mass displacement. What others–such as the residents of Favela da Catacumba–were not able to do, they have achieved. As Luis, the leader of Sacopã, puts it:

“Maybe we are one of the number one resistance movements in the country due to the location in which we find ourselves, due to the economic value of this location. Therefore, racism is not that strong, because we fought against economic power and the ability of the powerful to influence all matters of politics–and managed to win… We must have been helped by the Orixás. After everything we have been through, people wonder: ‘How are they still there?'”

In a city like Rio, this is an important message of strength and hope. The quilombo hope in the everyday activism of resistance groups.

Ethnic rights are also important for Brazil’s native population, which is today composed of 305 different ethnic groups, according to the Brazilian government’s statistical agency IBGE’s 2010 census, and speak around 150 to 180 indigenous languages. Brazil’s re-democratization period witnessed the increased protagonism of its indigenous peoples, who secured the end of formal tutelary power in the Constitution and the recognition of a number of rights, such as the right to their cultures and differentiated education.

Due to the hardships of living in rural areas, especially those where neighboring farmers threaten native communities, many indigenous peoples have chosen to migrate to urban centers in search for better living conditions, education and employment. The IBGE estimates that around 324,000 indígenas live outside of the terras indígenas (indigenous lands, or TI by the Portuguese acronym), 80% of these in the Southeast region of Brazil. The city of São Paulo, for instance, has a population of around 13,000 urban indigenous peoples, and has had a well-articulated indigenous movement since the 1980s. In the city of Rio de Janeiro, where the IBGE counted 6,000 urban indígenas, the phenomenon is much more recent.

In 2006, the Aldeia Maracanã movement occupied the abandoned building of the Antigo Museu do Índio (Old Indigenous Museum), located next to the Maracanã Stadium. This was done with the aim of giving greater visibility to Rio’s indigenous movement. They stayed in the building until 2013, holding monthly storytelling events. That year, Rio’s government decided the site should serve the needs of the upcoming World Cup and evicted its indigenous residents, threatening to tear it down to build a parking lot.

Gathering popular support and media attention, the group managed to protect the building, which is now protected. Nevertheless, the residents were forced to relocate to temporary housing, where they lived for over a year. This year, they finally moved into the block of flats reserved for them in a condominium of the Minha Casa, Minha Vida public housing program. The building of the Antigo Museu will now be renovated in partnership with the State Secretariat of Culture and become a Center of Reference for Living Indigenous Culture, functioning as a living museum and as an embassy for other indigenous peoples when they come to the city. The members have now officially formed the Aldeia Maracanã Indigenous Association as well as an Indigenous Regional Council aiming to secure public policies–such as housing and health care–for indigenous peoples living in the state of Rio de Janeiro.

The presence of indigenous peoples outside formally designated indigenous lands is still an idea many need to accept, including the general public. But even government institutions such as the National Indian Foundation (FUNAI) responsible for Brazil’s indigenous policies is in need of adapting its understanding. When many agencies, including federal and state ones, did not recognize members of the Aldeia as legitimate indigenous, they were left institutionally helpless.

Despite the absence of state support, however, they were successful in gathering others and achieving their goal of securing the Antigo Museu’s building as a place for indigenous resistance. When groups such as Aldeia claim rights in the city, indigenous peoples are putting the colonial understanding of ethnicity and indigeneity on its head. Similar to quilombos, this understanding associates indigeneity with geographically distant, rural communities as pre-modern, radically different identities. When these identities surface in the city, when indigenous peoples wear jeans and drive cars and continue to self-identify as indigenous, the prejudices against them become more apparent. They struggle to assert themselves as equal and legitimate citizens who, despite being in the city, are no less indigenous. In the words of cacique (indegenous chief) Marcos Terena: “I can be what you are, without ceasing to be who I am.”

The Miracle of Resistance

On the one hand, ethnicity is an enabler, for it makes it possible for ethnic groups to claim a number of rights based on cultural alterity, as guaranteed in the 1988 Constitution. On the other, it is also limiting, because it repeatedly and constantly maintains them in the colonial, expected form of ethnicity. This prejudice limits such ethnic groups to rural, distant, less influential and pre-modern communities. Therefore, ethnic groups in the urban context such as Pedra do Sal, Sacopã and Aldeia Maracanã struggle against such attempts to keep them ‘in their place’–geographically as well as socially. In resisting, these groups mobilize their cultural and ethnic differences to assert their equality as citizens. The new notion of civil rights that formed the base for the 1988 Constitution has created many possibilities for groups who self-identify within ethnic categories, either as quilombolas or indigenous peoples.

Nevertheless, it is important to stress that these groups’ achievements are more often than not the outcome of their own stubborn militancy, forcing the state to deliver the promises it makes. Without these groups’ persistent activism, ethnic rights would be yet another lifeless constitutional clause or law. Among the many obstacles these groups face is the state’s slow and time consuming bureaucracy, which becomes clear in the quilombos’ titling process. Bureaucracy, together with economic interests, functions to conceal racial discrimination, because wealthier individuals are able to circumvent the state apparatus’ bureaucracy with economic resources and power to influence the judicial system. In this context, when Luis from Quilombo Sacopã spoke of the many reasons they managed to stay when so many others were forced to leave, he uttered: “Ah, the miracle of resistance.”

It seems that in Brazil, despite the existence of an inclusive legal framework, only the miracle of resistance can guarantee ethnic rights.

Désirée Poets was born and raised in Rio de Janeiro and has been undertaking her Ph.D. at the University of Aberystywh, Wales, where she also completed her Masters in Postcolonial Politics. Her interests lie in urban political mobilizations, currently with a focus on race and ethnicity in urban spaces.