For the original article in Portuguese by Davison Coutinho published in Jornal do Brasil, click here.

Major Priscila Azevedo, commanding officer of Rocinha’s Police Pacification Unit (UPP) has been promoted to commanding officer of the South Zone UPP unit. As a result, the leadership of the community’s UPP has been given to the current commanding officer of the community of São Carlos, Major Leonardo Nogueira, who has already commanded the UPPs of Pavãozinho and Mangueira. The announcement was made on Wednesday, August 20, at Rocinha’s local association meeting, by Colonel Frederico Caldas, UPP coordinator. The change will take place once the Colonel has named Major Nogueira’s substitute for the São Carlos unit. Priscila will take over the second Police Pacification Area (APP) that is in charge of the UPPs of Santa Marta, Babilônia and Chapéu Mangueira, Pavão-Pavãozinho and Cantagalo, Tabajaras and Cabritos, Escondidinho and Prazeres, Vidigal, Cerro-Corá and Rocinha. 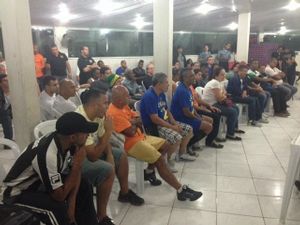 The meeting was an opportunity for residents to voice their concerns regarding the UPP, like the increase in violence in the community and the police’s lack of respect for the local population. The meeting began with the presentation of the association’s presidents and the community union’s president. The importance of dialogue between the community and the state was stressed. Major Priscila and Colonel Frederico Caldas both spoke of the importance of a good relationship with residents.

Community leader Carlos Eduardo Barbosa, known as Duda, spoke of the lack of the right to come and go at will in the community and the difficulties of making formal complaints at the UPP police station, since the resident is often seen as a protector of criminals. Duda said that in March of 2013, he informed Rocinha’s UPP office that Amarildo’s family was suffering from being pursued by the police. His concerns were ignored and Amarildo was murdered in June of 2013. He highlighted that Rocinha’s problems go much further than just security.

“I wish Rocinha’s only problem was that of security. Here we lack the most basic services.” He also complained that police action has escalated into violence and said that when shootings occur, fear of innocent deaths is very high.

Adriana Pirozzi, professor and community leader, praised Major Priscila’s courage and announced that Rocinha’s social organizations want to partner with the pacification process. However, they have never sensed the UPP’s interest in joining in with local projects.

Colonel Frederico said that Rocinha was not better off before pacification. He believes the situation within the community is completely different. Frederico also said he doesn’t view the police as being able to take away the right to come and go. He said that events are forbidden in the community because there are no adequate spaces to hold them, which makes it difficult for the UPP to allow them to happen and avoid accidents. He said Rio is better off now than six years ago. However, he recognized that the project is far from ideal, and that police officers act wrongly, even when stopping people on the street.

Major Priscila said that Rocinha’s large size creates a very complex demand of public security and that she is open to partnerships with local institutions that prioritize the good of the community. She stated that the UPP already has partnerships with some local institutions and serious people who are committed and have suitable records. She admitted she is saddened when receiving complaints about children being hurt. She hopes this generation of children will be free of the drug trafficking life. The Major guaranteed that, if it depended on her, there would be no conflicts in Rocinha, and she apologized for the conflicts that had happened. She compared it to her time managing the favela Santa Marta, where there weren’t any armed conflicts in the two years that she was commanding officer.

Eliana, another Rocinha resident, complained this type of dialogue between the UPP and residents should have happened a long time ago. She said Rua 2 is in chaos and disagreed with Colonel Frederico, insisting that Rocinha has taken a turn for the worse in the past two years. 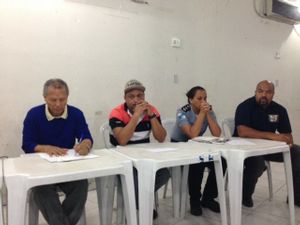 “Before, we knew we had one armed power and we could walk in peace. Now, there are two powers and at any moment we could be in the middle of a conflict. When I see how Rocinha is now, I become sad. The UPP died when Amarildo died, and Rocinha’s situation is similar to that of Complexo do Alemão. I pray and believe that Rocinha will get better.”

I, Davison Coutinho, took advantage of the opportunity and said that we residents are not against pacification, but we are against the situation of projects and public services that haven’t reached the community. Before, the excuse for lack of services was the lack of security, but today we still don’t have the most basic services. I said there would never be peace in the community while its residents lived in negligence, while the priority was not that of empowering its residents through education and teaching responsible citizenship.

Resident and well-known art professor, Roque, said he was violently approached and beaten by UPP police who did not carry identification badges in the middle of teaching an art class to 40 students. Roque filed a complaint at the police station after having to wait from noon until 8pm. Upset about the events, he went to the State’s Human Rights Commission and will take the complaint forward so that those police officers are removed from Rocinha.

Capoeira master Manel said the community has worsened in recent years and is worried about the children’s future, since Rocinha does not have good schools.

Resident and athlete, Kadu, said his only option is to leave the community. According to him, where he lives used to be very peaceful before pacification. Today, it is impossible to live there. The resident revealed he had hoped for great transformation for the community, but there are still many things to be done. He said the family clinic doesn’t work anymore, and the promised projects live only in the residents’ dreams.

“The hope was for a better Rocinha. Where sport, leisure, and culture are lacking, violence remains.”

Colonel Frederico responded by saying that Rocinha, because of its size, has significant problems, and lamented that when the UPP arrived, public service projects did not accompany the process of pacification. The Colonel stated that the role of the UPP’s social programs is to bring police and community together. Responding to the complaint of increased violence, the Colonel admitted that it is difficult to fight violence due to the large drug market in Brazil, especially that of Rio de Janeiro’s South Zone. He asserted he does not tolerate disrespectful police attitudes towards residents. He defended the good policeman, but he does not accept the policeman that mistreats residents and encouraged residents to report cases of abuse. According to the Colonel, Rocinha and Complexo do Alemão are the biggest challenges to the pacification movement.

Davison Coutinho, 24, is a life-long resident of Rocinha. He has a B.A. in Industrial Design and is currently a Masters student of Design at PUC-Rio. He is a member of the Rocinha, Vidigal, and Chácara do Céu resident’s commission. He is a teacher, writer, designer, and community leader in the favela.