The demolition of homes and clearance of favelas, on the grounds that Rio de Janeiro is preparing for major sporting events, has affected thousands of families. However, O Globo – the city’s major newspaper – has ignored the issue. The news has been coming by Spain’s El Pais, the British newspaper The Guardian, reports on violations of housing rights, and even the UN’s reports. Last week, finally, the silence was broken by two headlines on the cover (on the 4th and 5th of October) and in an editorial (the 6th of October). The removals have finally become an issue.

But just as it was presented, the issue was resolved. According to the newspaper’s editorial, the World Cup and the Olympics would be “a chance for Rio to face the challenges posed by lawless occupation.” And yet, from the opinion section on the 5th: “WARNING: The right decision to remove Vila Autódromo, in Barra, serves the urban interests of the city and Rio’s commitments to the Olympic Games. As, on the other hand, it would contradict the known interests – political, ideological and speculative – of the industry of illegal occupation, one should be alert to expected actions undermining the project.” 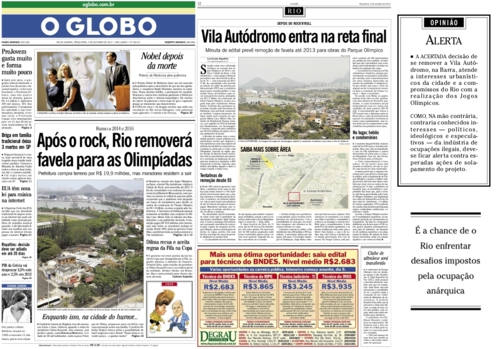 Following the line of argument in the paper, more than a thousand favelas in Rio de Janeiro, with their millions of inhabitants, would be the result of an “industry of illegal occupation” rather than of a serious housing shortage that forces the population to build their own homes. With the removals, the government of Eduardo Paes would be above “political, ideological and speculative interests” and instead facing “challenges posed by lawless occupation.” However, we know that the real interests play a different game. Believing that the favela resident or the Military Police militiaman is the big speculator in this market is, at the very least, innocent.

It is necessary, in the first place, to highlight some data available on the Internet. According to the website for the Superior Electoral Court (TSE), of the ten largest corporate donations received by the campaign that elected Eduardo Paes in 2008, all ten were from the construction or real estate industries. In total, R$11.4 million were collected. Moreover, according to the National Newspaper Association (ANJ), the “Real Estate” sector is the largest advertiser within the newspaper sector, with over 4 million dollars in 2010, followed by “Vehicles, Parts and Accessories.” These data shed light on the discourses and actions that are impacting the city. 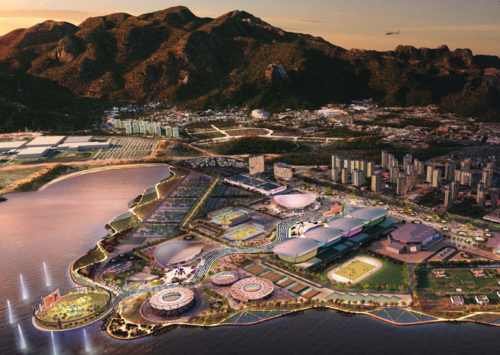 Vila Autódromo currently occupies a small area of what will be the Olympic Park neighborhood, in Barra da Tijuca. The area is so small that the English architecture firm AECOM’s design doesn’t even foresee needing the area for the Games. Despite O Globo taking as given its removal as a commitment to the Olympics, in fact this is not the reason. Barra is a key neighborhood leading the housing boom in Rio, with its large avenues for private cars, condominiums and natural beauty. Even the new eight o’clock novela, Fina Estampa, is filmed there. All expressways under construction (TransCarioca, Oeste, and Olímpica) connect the neighborhood to someplace, and the subway, skipping phases designated in the original plan, will be extended to Jardim Oceânico. So the question is: does Vila Autódromo “fit” in this scenario?

There is clearly an ongoing project of gentrification in this region, and Vila Autódromo is not the only target. Vila Harmonia, Vila Recreio II, and Restinga, among others, have already been removed. Many of them should not have been considered favelas, as the communities had access to services and their residents had legal title. Making Barra even more exclusive is in the interest of Paes’ campaign donors, who thus can enhance the profit margin for new ventures. By this logic, to live among “equals” lifts a property’s value, while proximity to low-income populations depresses it. At the Olympic Park, investment terms are explicit and provided in a public-private partnership: 75% of the over one million square meters in land area will be delivered to the consortium of contractors after 2016. 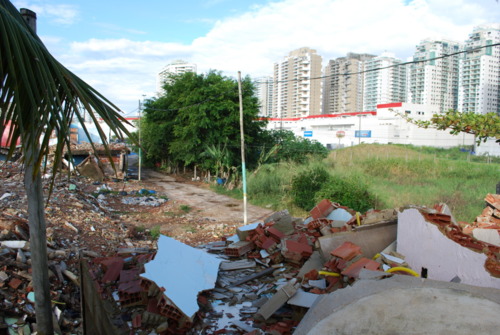 What few people know is that Law 11.124/2005, which provides for the National System of Housing in the National Interest, has the following guidelines in Article 4: the “priority use of land owned by the Government is for the implementation of social housing projects.” This means that not just the unused areas of the Olympic Park, but also much of the port area, both of which are public, should serve to build public housing, leaving the city more diverse and socially just. Mayor Paes, rather than enforcing the law, has decided to buy private land for $R19.9 million to resettle the residents of Vila Autódromo. Who were the owners of this land? Donors to his last campaign. O Globo was silent. After all, those who donate also take out ads. This is freedom of expression in our democracy.