In the 16 communities that make up the Maré Favela Complex, the same fate awaits all those with dreams of owning their own home: rising property prices. The average cost of a house in the area varies between R$40-50,000 (US$23-29,000), but there are some properties upwards of R$98,000 (US$56,000). Estate agents, a new branch of business in the area, exist in practically every community, a sign that buying and selling in the favela is good business. The possible start-up of the Pacifying Police Units (UPP) in the area, the imminent arrival of large sporting events in the city and even the privileged location of Maré (10 minutes from the centre of the city and surrounded by main transport links to the city centre) are reasons cited by residents as to why there is so much real estate speculation in the area.

With seven months experience in the business, 40-year-old Aroldo Gomes, a freelance real estate agent and owner of The New Home (Novo Lar Imobiliária) estate agents, said he got into the business when he became aware of the needs of people from other areas, who began entering the community to buy a house. “In the majority of cases people are interested in this favela because they have family living here and they want to live near them.” Another discovery made by the real estate agent is that the financial transaction must be completed at once in full, since the homes are not registered with the City’s General Building Registration (Registro Geral de Imóveis), and thus buyers are not eligible for a mortgage. “The clients say another way to obtain the money to buy their house is by way of workers’ compensation payments,” he recalls.

Mariluci Nascimento, 31 years old, a historian and resident of Nova Holanda (one of Maré’s neighborhoods), has been looking for a house to buy since March, but the high prices have meant she has not been able to make any offer on any property. “The houses are hugely expensive. I saw one in Vila do Pinheiro that cost R$95,000, and it wasn’t very special. In Nova Holanda there are adverts of houses in this price range. Completely unrealistic. Where I live at the moment, the infrastructure is not good, the sewerage is constantly blocked, every now and again there is a shortage of water and when summer arrives there is a constant lack of electricity. I really like where I live and I don’t want to go and live in another neighbourhood, but I think it is ridiculous to have to pay R$100,000 to live in conditions like these.”

She says that she can afford up to R$30,000 but for this amount one can only find an efficiency apartment. For a Brazilian labourer, who earns a minimum salary of R$545 (current rate) to be able to buy a house of this value, they would have to work for 5 years and save every penny. To obtain a property of R$50,000 they would have to save for 8 years, and one worth R$100,000, 16 years.

A probable reason for these massive property prices is the expected arrival of the UPP in the Complex. According to the Secretary of Public Security of Rio, the Maré Favela is among the communities that will benefit from this government programme by 2014. But before this, the BOPE (Special Operations Unit) have plans to build a base in the area.  However, the building work has not started for this. In July, the press reported that communities would receive daily raids from The Elite Squad in August but the month came to an end without any action from the unit.

The large sporting events, The World Cup in 2014 and The Olympics in 2016, are also pointed out as villains inducing speculation. This phenomenon is happening in every part of Rio and it is obvious that in the favelas, being part of the city and therefore submerged in the same logic of the market, the situation won’t be any different. The real estate agent Aroldo Gomes says that his clients are saying that if they sell their houses for R$15,000 or R$20,000 they won’t be able to buy anything, not even in other favelas. For this is the reality in Brazil at the moment.

Here is a map of Maré’s 16 neighborhoods: 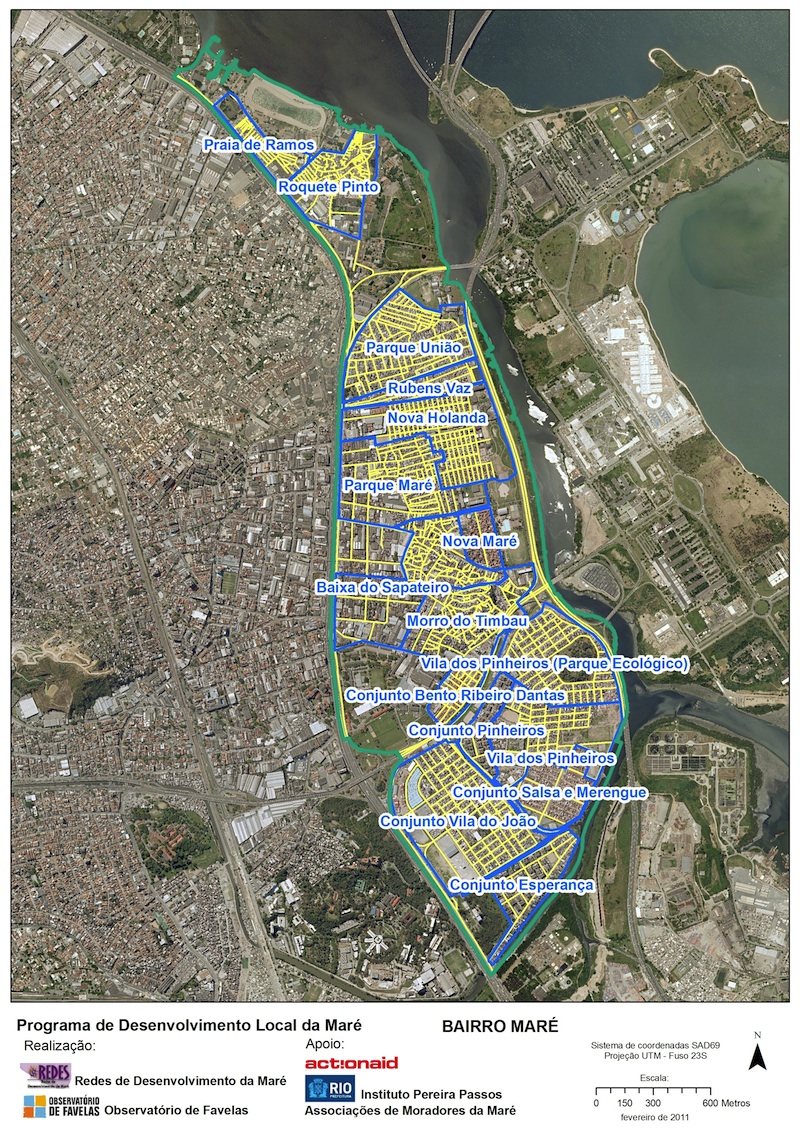