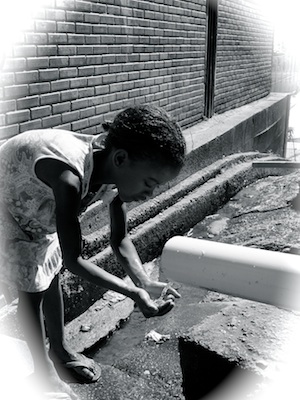 Water for Everybody. When you see it you imagine a genuine project from a serious government and one of the largest water distribution companies in Rio. But in reality, it’s not what it seems. I am going to explain why. My name is Jorge, I was elected (President of the Neighborhood Association) by a community who prides itself on fair and clean elections. Nobody put me arbitrarily in this is role, as was done for years. One year and 3 months ago I was invited to to attend a meeting at the Panamá Municipal School and it was there that I met the team responsible for the project Water for Everybody.

The project team received me and other leaders at the time and I asked if this project had real commitment behind it, or if it its objectives were simply political around election time. They told me it was serious and told me there were unique resources dedicated to the project. I believed them. The project started with such promise, they employed 16 workers from the community, bought the equipment, reformed the station and everything. But then with the passing of time something started happening: they started firing workers, so today out of 16 workers there are only 3 left working on the system. Then last Thursday they took the four pumps. In other words, the station is empty.

In summary, a year and 3 months ago CEDAE came to Andaraí promising a project whose name claims to offer what each citizen has the right to: water for everybody, but with financial support, responsibility and respect. But this last word does not appear to exist in the vocabulary of those who were responsible for the project. For under no circumstances should this be done: give hope to a suffering, anguished and forgotten community that has been neglected by the public sector. During the project’s one year and three month existence, what remains of the State’s Water for Everybody program is an obsolete water supply system, three workers, a second pump promised over a year ago, and the signs advertising the project.

So tell me whether the program was serious and had the dedicated resources to be carried out, because I have elderly women carrying water in Andaraí, families with members with disabilities with water shortage problems. They say that in the favela you don’t pay for water but you do and I guarantee that it is a lot more expensive than in other places. I am waiting for answers. Thank you for the opportunity to expose the problem.