“The Olympics are coming and the pressures of the City government are violently increasing, but a determined group of residents continues to fight for their rights. Vila Autódromo exists, resists, insists and re-exists!” –Vila Autódromo Community Facebook page

On Saturday November 28 residents of Vila Autódromo hosted the community’s second Cultural Festival. Announced on Facebook as a celebration of their life, resistance and struggle, the #OcupaVilaAutódromo event united individuals and groups from a wide range of backgrounds, including members of nearby Camorim Quilombo, university students and professors, musicians, researchers, organizers from other favelas, NGOs and community leaders and residents to enjoy music, dancing, capoeira, an awards ceremony, food and beverages and film screenings. It was a very important day for the community that, “brought people from outside to celebrate and show support for us… to show our community is not abandoned,” remarked resident Luiz Oliveira. 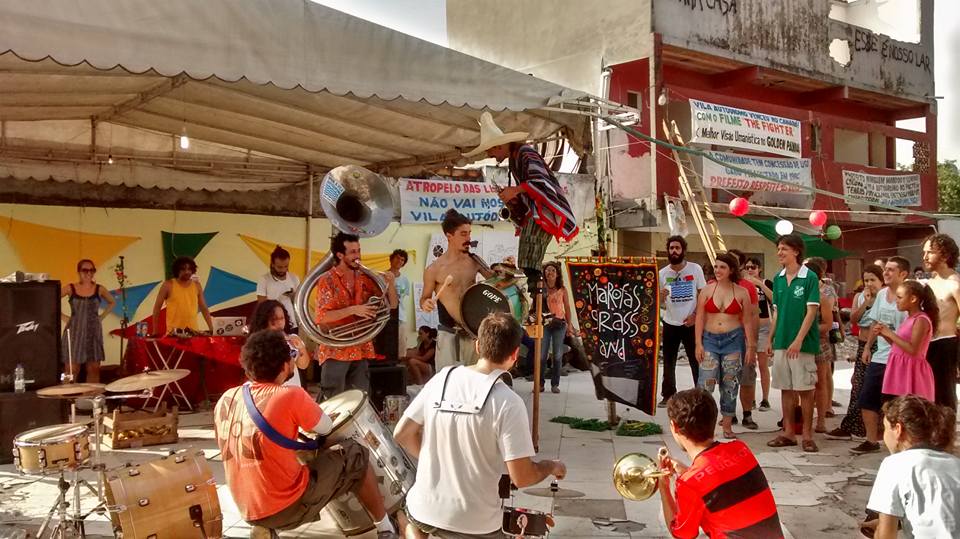 Weeks of preparation led to the festival that was held in an open air space between the rubble and remnants of the once vibrant community. Although many houses in Vila Autódromo no longer stand, the community spirit remains strong and was evident at Saturday’s event.

Sandra R. Damias, mother of one of the 40 families that still remain from the initial 600-700, highlighted, “It is not the houses that make this community, it is us!” She continued, “[This event] is yet another force and another happy memory to show this community is not dead!”

Two bands were invited to contribute to the “positive energy” of the day, Ataque Brasil and Marofas Grass Band, as well as a presentation by the capoeira group from the Camorim Quilombo community.

Following Black Awareness Day celebrated in Brazil on November 20, a special tribute was delivered to longtime resident and spiritual leader Heloisa Helena Costa Berto, a Candomblé priestess whose home (also a spiritual center paying homage to Nanã, the Orixá of the Lagoon) is among the final two marked for demolition, based on the Eminent Domain decree filed by the City last March. At the event, Heloisa was awarded the prestigious Pedro Ernesto Medal from Rio’s City Council and the Dandara Award from the Rio State Congress for her resistance and strength in the fight for her land and religious rights. Postcards were distributed with a quotation from Heloisa saying: “It is not a question of [economic] value [of the property], but a love for your land, your home, and the desire to live in your home. That is why we fight.”

The premiere screening of the documentary “The Fighter: A Dark Side of Sport” took place later in the evening. The film by South African director Dara Kell follows the story of 12 year old Vila Autódromo resident Naomy and won a Golden Panda Film Festival Award in Canada earlier this year.

Vila Autódromo residents were very active in organizing and promoting festival, sharing information on the event’s Facebook page to over 3,500 invitees, demonstrating the community’s reach and extensive network. Lifelong resident Nathalia Silva, 29, said: “Today is very important [for the community] because it’s another moment in history… Each day is becoming more delicate, and today, November 28, 2015, we have friends and people working and fighting with us.” She continued: “It’s so great to have all these people here today in the community that I love, that I grew up in and that I want to remain living in.”

Vila Autódromo residents have been fighting against ongoing forced evictions and mistreatment by the city government since the announcement of the 2016 Rio Olympic Games in 2009. Located on valuable property next to the main Olympic Park facilities, the community has spent years battling for their right to their land, for which they received titles and gained a 99-year lease. The community has worked hard to deliver events and approaches to support their position, including an award-winning upgrading plan (now in its fourth version) confirming residents want to and can co-exist with the construction of the Olympic Park.

However recent lightning evictions and poor living conditions have led residents to protest. On Wednesday December 3, Vila Autódromo barricaded the entrance of the community in demand for a street upgrade as conditions currently leave residents ankle deep in mud. Residents insist they will continue to protest until action is taken to improve conditions.