For the original article in Portuguese by Juliana Portella published in Viva Favela click here.

City of God was the second community in Rio de Janeiro to receive a Pacifying Police Unit (UPP), in 2009, and today counts 343 permanent police that attend to its more than 2km extension and 47,000 residents, across 18 territories. As in other parts of the city, the UPP project is problematic. According to resident accounts, in the lead-up to Christmas, when residents strolled the streets more often and children were on vacation, a group of militia arrived in the favela and opened fire. Four people were hit and one adolescent and a child died. The crime interrupted the festive Christmas atmosphere in the community.

Wagner Novais, a filmmaker and community resident, thinks that the pacification project is not about peace. “I want to see schools, health, transportation and education because there are already too many police. What is lacking is dignity. It’s been years since the State Government began building a middle school. They’ve invested R$6 million and it’s still not ready,” revindicates Wagner, who believes public security can be guaranteed by means that are not repressive.

No one can take any more

The incident that killed Marcos Vinicius dos Santos, 11, and Breno da Silva Gomes, 14, and left Jaoquim Cândido and a woman who does not want to be identified injured, served as a catalyst that sent residents to the street calling for peace. In a mixture of revolt and indignation, protestors dressed in white and came together on December 30, 2015 to peacefully protest on the corner of Josafá and Edgar Werneck streets. According to reports, the main suspects of the crime are militiamen active in Gardênia Azul. The Homicide Division (DH-Capital) is investigating the case and a suspect has been arrested. 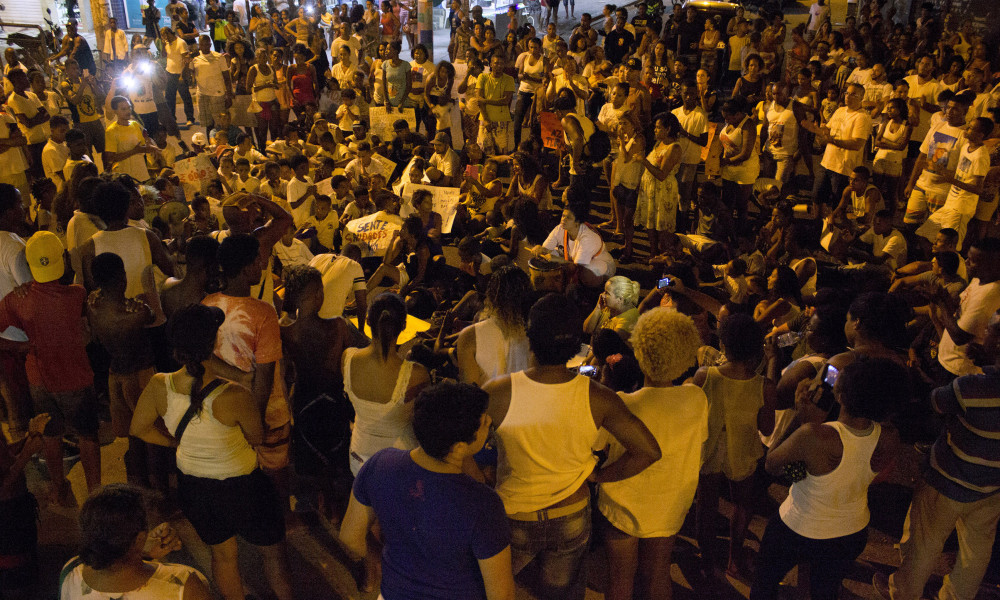 Rogério de Souza, who was in the street at the time of the crime, recounts various men who entered the favela shooting. According to him, there were many people in the street at the moment that the killers arrived. “They came to kill. I was playing an arcade game and saw everything. The street was calm and suddenly men appeared shooting at nothing,” he recounts. “I’ve lived here since I was born and never seen anything like it. It is unbelievable what happened, it was cowardice. The walls in the streets are full of bullet holes,” reported Rogerio, indignant, while pointing at the marks of insecurity.

Lúcia de Freitas, who also lives in City of God, doesn’t believe there was a shootout as was reported. “It wasn’t a shootout because there were only teens and children playing in the street. We feel like prisoners in our own houses. The sensation of insecurity is enormous,” she says.

One of the high points of the protest was the artistic intervention by actor and resident of the community Giovana Rocha. From the beginning the organizers of the event had thought about using toys as a form of protest. They were placed on the ground to represent the interruption of childhood for the community’s children and this space served as a stage for Giovana to recite the poem “Da Paz,” by Marcelino Freire.

Famous for being one of the composers of the classic funk song Rap da Felicidade, MC Doca, who still lives in the community, made a point of participating in the protest and calling for better days. “City of God can’t put up with more. Those who died were one of us. We want peace.” The singer Tonzão Chagas also called for justice. “2015 was the year we had the most murders in City of God–the majority of them haven’t been solved. We don’t resign ourselves to these statistics. No one is going to quiet us. Enough of seeing our friends die here in City of God,” he categorically stated.

The father of one of the victims, Marcos dos Santos, was also present at the protest. He thanked his neighbors and friends for their care and asked for justice for his son. “My son helped me every day. I’m devastated but I’m going to fight for justice and that this doesn’t happen with any other family,” he lamented. 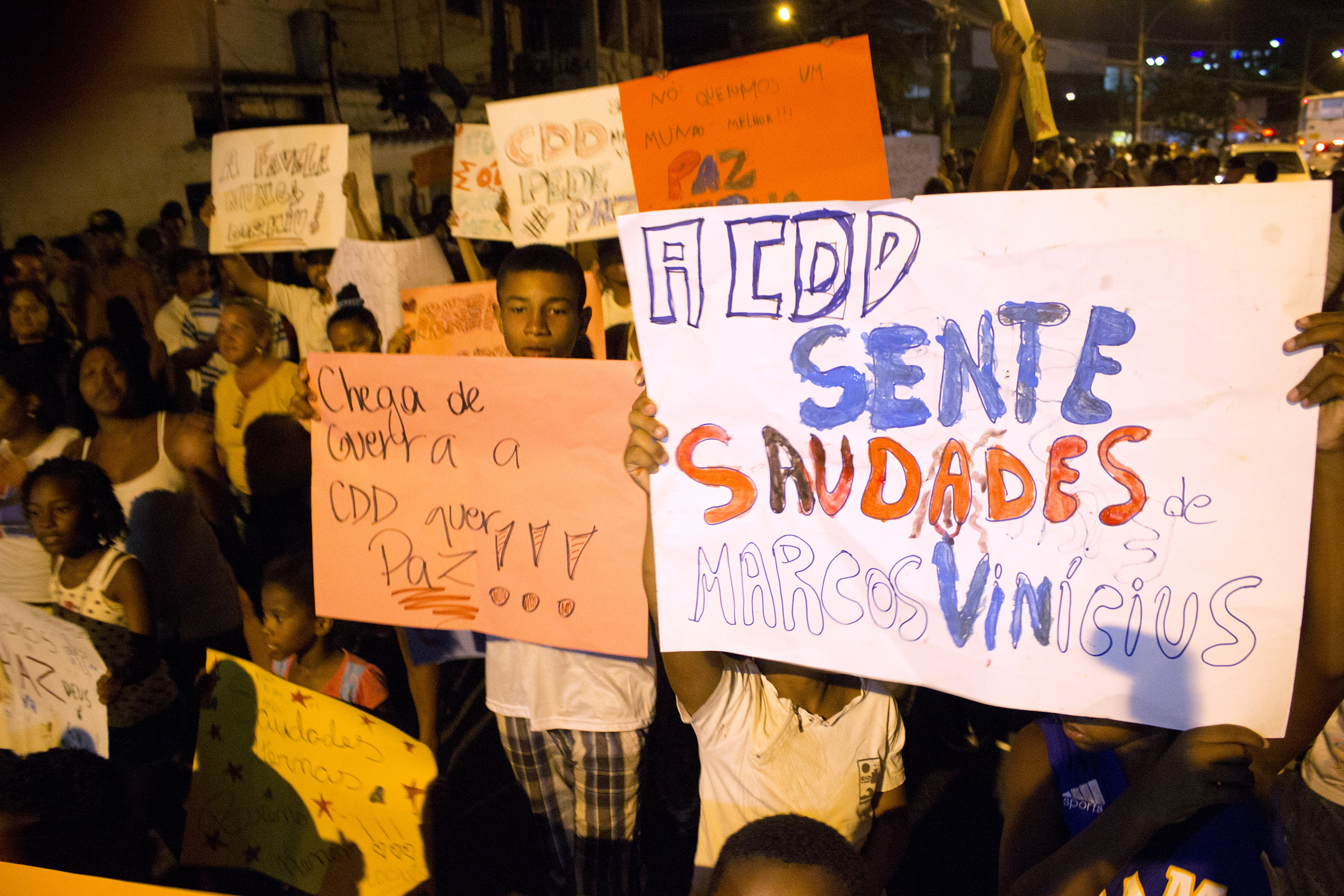 The same targets as always

According to journalist Cecília Olliveira, a specialist in criminology and public security, a relationship of persecution has been established towards a class that is mostly comprised of poor, black residents of low-income areas. “Wars don’t exist against things, they exist against people. And what is the profile of the ‘enemy’ in this war? Mostly blacks, the poor and residents of low-income areas. In these areas anything is allowed, after all it’s saving society from the ‘bad’ that reigns there.”

For Olliveira, author of the Abordagem Policial blog on the police and public security, solving the problem is only possible if there is a revision of policies and legalization of drugs. “The rate of violence is directly linked to the type of policies we have. In truth, our police fulfill the role they have been assigned. If drug policies aren’t revised, the ‘war’ is not going to end. The problems will be reduced but the state of ‘war’ will not be revoked.”