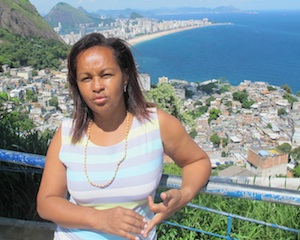 Seated in what was a widely used community movie theater, Bernadete Soares Pereira gestures toward a headless socket on the wall. She took down the projector and related furniture and devices in order to safeguard them should the government return to evict them. Roughly two months ago, Bernadete’s formally-established NGO GASCO (Community Action Social Group) was served notice to leave their building in the community of Vidigal, where they’ve run sports, educational and development programs since 2007, servicing some 200 students per day. The notice states that the building belongs to the municipality, yet it is common knowledge that the site sat unused for years until Bernadete reclaimed it. Aware of the uncertainty of the legal status of the site, Bernadete repeatedly tried to open a dialogue with local government officials in order to formalize her NGO’s use of the site, but these attempts were ignored. Instead, once the community was occupied by the police to expel Vidigal’s drug traffic and establish the UPP (Pacifying Police Unit) in early November, GASCO was served with an eviction notice. Many here suspect that next October’s mayoral elections have something to do with it and that once evacuated the site would be used for electioneering purposes. 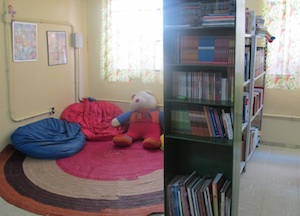 On Friday, January 13th, Bernadete offered a tour of the community center to a group of foreign journalists and visiting westerners. On a previous visit, the fenced-off court was bursting with families watching their children compete in a GASCO sponsored volleyball tournament. Today, most of the facilities sat idle, the classrooms empty, the computer lab unused. Summer classes had been canceled due to the uncertainty caused by the pending eviction. Since receiving notification, Bernadete has been busy consolidating community and outside support for GASCO. 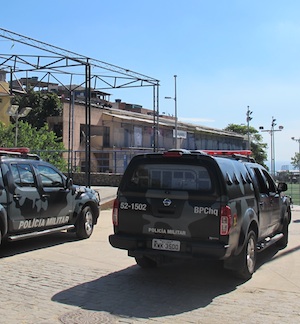 On November 29th, a protest was held in favor of keeping the building in GASCO hands. Bernadete has also been successful in garnering support from within government. Her case has been taken up by four public defenders and she is requesting a letter of support from the office of Child Protective Services. When garbage trucks showed up at the entrance of the community, headed for GASCO, intent on beginning the eviction, they were repulsed by the tenant-coronel of the Shock Police (Batalhão de Polícia de Choque – Brazil’s elite police unit) currently controlling the neighborhood, who asked the truck driver for a judge’s order authorizing their mission. There was none, so they had to leave. This schizophrenic response by the government belies a lack of communication between local offices. However, in an odd way, this points to progress. In years past, communities like Vidigal had no recourse when faced with unpopular government decisions. Now, even they have built in-roads into formal power structures. 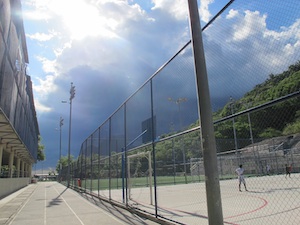 Around the courts, some children play pick-up soccer. A gaggle of young girls, on break from school, attach themselves to the visitors, quickly relieving them of their cameras and sunglasses in order to take glamor shots of each other. Not far from them, a unit of Shock officers grill their lunch from their outpost overlooking the courts. Shock officers are polite and courteous to the visitors. Soon, the girls are on them, flashing pictures of their friends giving bunny ears to men with guns. In another world, this would seem strange, but in Vidigal somehow this absurdity makes sense. The Shock police will shortly be replaced by UPP (Policy Pacifying Unit) officers as the community completes the “pacification” process. 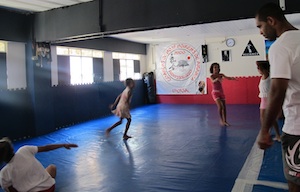 Blue signs alert the public of the government’s plans to reinforce the cliff faces to prevent rockslides, a huge concern among residents. The government put up the signs soon after the pacification of Vidigal in November. The signs remain, but to date no work has begun. For the most part, over generations, the promise of the provision of government services has remained just that. Occasionally, they send in men with guns, but they never stay, making them more of a novelty than a sign of improved future security. There is hope this time is different, and that the other promised services follow shortly.

The tour ends and Bernedete insists on escorting the visitors down the mountain. The trip takes twice as long because Bernedete is constantly stopped by vendors, taxi drivers, hair dressers, and families returning from a day at work, all wanting to share the latest gossip, all offering their support. Spending even a day in Vidigal, one is reminded quickly and often why favelas are the only neighborhoods in Rio referred to as “communities.” Everybody knows everybody, for better or worse, and secrets are hard to come by. You are judged by what you have done, not by what you say you will do. While Bernadete’s title is self-imposed, it is clear that she holds a sway not possessed by an absentee mayor. This begs the question: what is more valuable in real terms, an existing community institution that served 7000 youth in 4 years and continues expanding its services by the week, or a ribbon-cutting ceremony?