The first Run for Vila was held in Vila Autódromo on Saturday March 26. The event was a collaboration between the community resistance movement and Brazilian artist Igor Vidor and brought together residents, activists and supporters in a four kilometer run around the community. Saturday’s events were part of Vila Autódromo’s ongoing weekly activities where residents host and invite supporters to engage with the community to support their struggle against eviction.

Saturday was not only a reflection of Vila Autódromo’s ongoing resistance and struggle to live alongside the Olympic Park, but honored communities worldwide which have suffered evictions from mega-events. On Saturday, Vila Autódromo was presented with the Olympic Poverty Torch, which has been passed down by community organizers in Olympic host cities since it was created in 2010 in Vancouver, representing a range of Olympic-related issues including evictions due to real estate speculation. When the torch relay arrived in London in 2012, organizers said “The Poverty Torch Relay highlights long-standing Olympic issues of eviction, land seizure and the exclusion of the poor. London 2012 is no different. The Olympics epitomizes corporate power and growing social inequality.” Meanwhile, as it arrived in Vila Autódromo, resident Natália Silva said: “The torch has significant meaning… And we hope to pass it on to a community in the next host city [Pyeongchang, South Korea].” 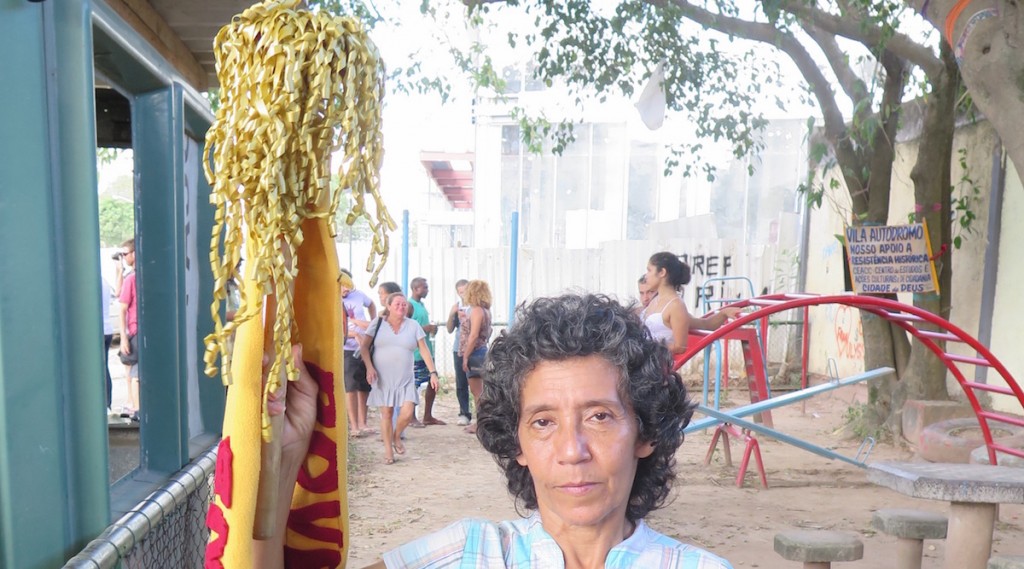 In recent weeks the Rio city government has increased pressure on the community with devastating demolitions of the Neighborhood Association and Helena Heloisa’s home and Afro-Brazilian religious center, and earlier this month the demolition of Maria da Penha’s home on International Women’s Day. The loss of her house did not remove Penha and her family from Vila Autódromo. For now they continue their struggle from the community’s Catholic Church, located in the heart of the community.

Last week, on Wednesday, March 23, the community suffered yet another blow as the Parquinho community playground was demolished. The park had been revitalized in a collective effort in November last year. The City also changed the physical border of the community, without warning, and a resident was threatened by an agent from state water company CEDAE.

The demolitions come at a time when the official discourse is that Vila Autódromo will remain. Residents still haven’t seen the Mayor’s plans for the community but some received individual invitations to meet with the Mayor and discuss the plan on Monday, March 28. On Saturday residents reported that they hoped to make suggestions and have an influence on the plan. Residents posted a statement on the community’s Facebook page on Monday morning: “[We] hope that from today a democratic, less traumatic process of legalization and decent, true, loyal upgrading, without tricks, begins.”

Following Saturday’s run, residents and supporters celebrated the 15th birthday of Flora, one of four siblings who have lived in Vila Autódromo all their lives. The party included a stilts workshop, music and food. Flora’s mother, Sandra Maria, is a strong figure in the community’s fight and recently appeared in a widely shared video describing the psychological pressure the community is suffering and thanking supporters.

Despite everything the community has been through over the years and culminating in the last few weeks, residents continue to host weekly events, invite supporters into their homes and celebrate the community’s spirit, which has only grown with time, despite demolitions. Vila Autódromo plans to hold another Run for Vila in the coming weeks and maintain a regular program of weekend activities.