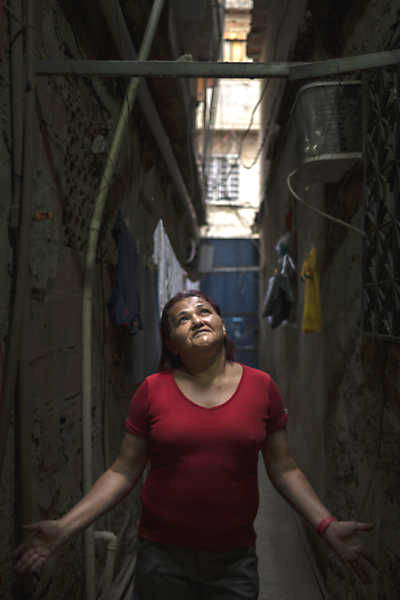 To understand how best to liaise with police forces and even the army, who are commanded by the State to fight the “war on drugs” in the area, she enrolled in the Maré de Direitos (Maré Rights) course offered by Redes de Maré, which develops projects in areas such as education and public security.

The organization was founded by Eliana Sousa Silva, finalist of the 2015 Social Entrepreneur Award.

“I learned that being a woman was about much more than just being a housewife, being submissive to a husband, demanding that I respect them. I have a right to say no. This body is mine,” says Marinalva.

With the same pride, she defends the inviolability of her home, demanding a warrant should any police officer wish to enter her house, for example.

In 2013 I started the Maré de Direitos course which is only for women. It was one of the most marvelous things that has ever happened to me.

I learned that being a woman was about much more than just being a housewife, being submissive to a husband, demanding that I respect them. I have the right to say no. This body is mine.

My fight in Maré started with me because it wasn’t worth fighting for anyone else if I’m not cared for. At this moment in time, my fight is against government dictatorship. We are in a democracy but they don’t know this.

They decided inside the favela–I don’t like the word ‘community,’ it is full of lies, so I say ‘favela’–to take little kids out of their elementary school and put them in a place where there are different drug trafficking factions.

Speaking with the school directors, we created a petition to block this from happening. I spoke to the councilman: “Favela residents aren’t stupid. We’re not idiots. We’re not ignorant. I refuse to accept that my grandson will be taken out of here and into the gates of hell, the Gaza Strip.”

I’m direct. I think pretty words are for politicians. Politicians come on TV and say, “Good day ladies and gentlemen. Please allow me to come into your homes,” and then start using nouns and adjectives that people don’t understand.

I’m not fighting just for me. It’s for the right for children to stay in school. It’s a achievement.

Where is the Pacifying Police Unit (UPP) program going well? Police is no synonym for peace. It never was and never will be. It is the state’s main power. In the South Zone they come in saying, “With your permission, doctor.”

The last time they knocked here, they asked: “Who lives here?” I responded, “My neighbors.” I’m sarcastic when I want to be. “Do they work?” I said yes. “Only workers live in this alley. I don’t accept criminals here.”

And so I asked the officer, “Are you going to come in? If you have a search warrant then feel free. If you don’t, I request that you get one and bring it to me please.”

Because the general warrant for the favela cannot include my home. My home is not the favela. The favela does not live in my house.

I learned to act like this after starting the course. I’ve already had a hard time in the favela.

[The police] came up and started beating some guys. I said “Hang on, not in my house.” The only thing the officer didn’t call me was Bruna Lombardi. The rest you can imagine, he called me.

I put a poster up on my front door saying “We know our rights.” This already startles the police. “Wow, people in the favela know their rights, yikes.” On the course booklet it says, “Do not come into this house without respecting the legality of the action. In the case of disrespect, call the Military Police Internal Affairs.”

If you are slapped in the face by a police officer, would that be it? What officer has been severely punished for breaking into a resident’s home illegally?

This type of campaign is important so that you know what rights you have, that entering a house without a judicial warrant is illegal. But this doesn’t stop me being afraid because I don’t have faith in Internal Affairs. If I were to make a complaint, would anything actually happen?

The drug trafficker is the man here. The drug traffic doesn’t bother you. I’m definitely more afraid of the police. For the police, favela residents are trash. Same goes for politicians as well.

Police officers earn a pittance and come here to face firepower greater than they have. Back in the day, the drug traffickers had machine guns and the police had revolvers. It has gotten a bit better now.

You need to pay police well, train them well, teaching them that it can’t be “when you approach people on the asphalt or formal city it’s one way yet in the favela it’s another.” Neither is thinking that the son of a rich guy smoking cannabis is unwell yet here in the favela the guy is addicted.

The army occupied Maré just so the government could spend a lot of money and have a justification: “We are spending it on public security.” The army came because of the World Cup and the Olympics. They didn’t come to protect us here.

Pity the green parakeets [soldiers]. They’ve been trampled on here. They have no firepower. Residents start throwing bottles at the army, they cannot do anything, they can’t shoot you. No one does that with the Military or Federal Police.

The system is totally wrong.