The following excerpts come from Favela Stories, a blog and Facebook page by Sascha Bercovitch* that tells the stories of residents in Complexo da Maré, one of Rio’s largest favela complexes, located in the North Zone of the city.

For all the talk of violence and poverty within favelas, the reality of life is a lot more complex: lavish birthday parties, beauty salons (for humans and dogs), small businesses, churches, frequent construction, and, more generally, people who are resilient, resourceful and happy.

Through telling their stories in their own words (the interviews are recorded in Portuguese and translated to English), the blog has two main goals: to challenge the pathological views of favelas represented in the media, and to show the eloquence and wisdom of people too often stigmatized and portrayed as “simple” or “uneducated.” 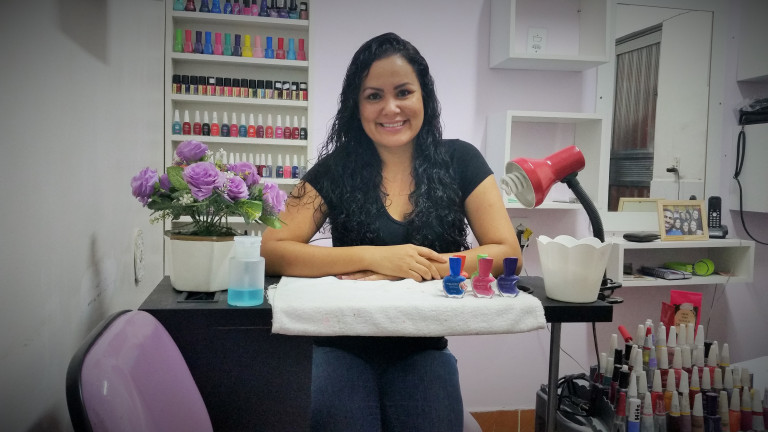 “I came to Rio by bus. My mom put me on a bus and told me, ‘one of my sisters lives there and you’re going to go live with her.’ I had never met my aunt, but when I arrived in Rio I recognized her face, because she has the same face as my mom. When I got to Maré – imagine! That girl from the countryside, that country bumpkin [laughs], not knowing anything. For me everything was new, but I adapted in a year. I didn’t end up living with my aunt very long. When I was 17 she expelled me from her house. That was when I discovered how to be independent, and it was during that time that I abandoned my studies.

“In order to survive I worked at various places, first at a restaurant, then at a snack shop in Copacabana. At one point, when all doors closed for me, I lived for a period on the street and to survive I entered the world of prostitution. After that I went to work in the home of a family. Since I was little I always did nails for fun, and along the way an interest awakened in that being my work. When I opened this salon here in my home I already had some clients, though not too many. I gained clients mainly through word of mouth, and something else that helped me and that still helps me is Facebook, social media. I have a little over a year working here, and I’m grateful to God because in little time I already have a good clientele. It’s enough for me to support myself well.” 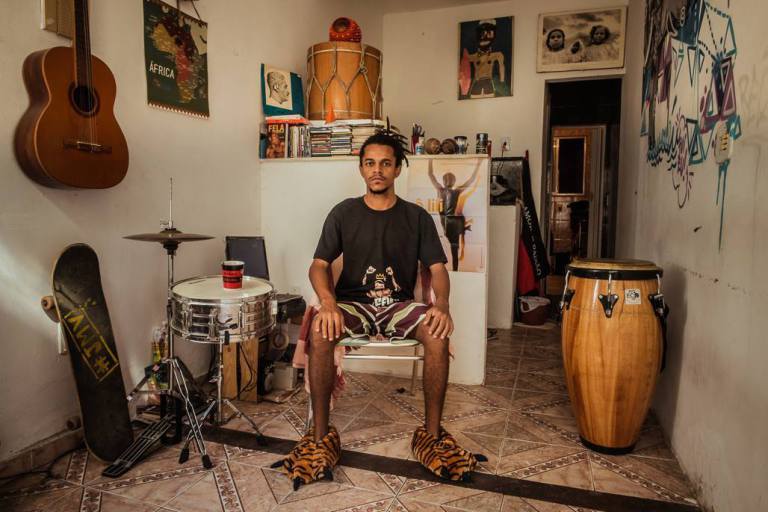 “Every day I play music here, and as with everything in the favela, it becomes interpersonal–you make a sound, you start playing a drum inside and people will appear at your window. I’ll open my door and the kids will come in and we’ll have a class: I’ll talk a bit about music, we’ll make some noise. It’s important to bring that perspective so they see that here it’s not just guns, it’s not just drugs, it’s not just the police. There are also artists, there are also people who work, people who struggle daily, the truth is that they’re the majority of the people here. The media don’t want to say that the majority of people here are the workers who move this city forward, because that doesn’t sell newspapers. The more blood, the more deaths, the more newspapers they’re going to sell. That’s why I like to open my door for kids to enter, to produce music and sound, to speak to them about what’s behind it all and what’s possible here: that even with you being poor, even with you living in a favela, you can still be an artist, you can still consume art. It’s not just the privilege of the middle class and the bourgeoisie, it’s the right of every citizen.” 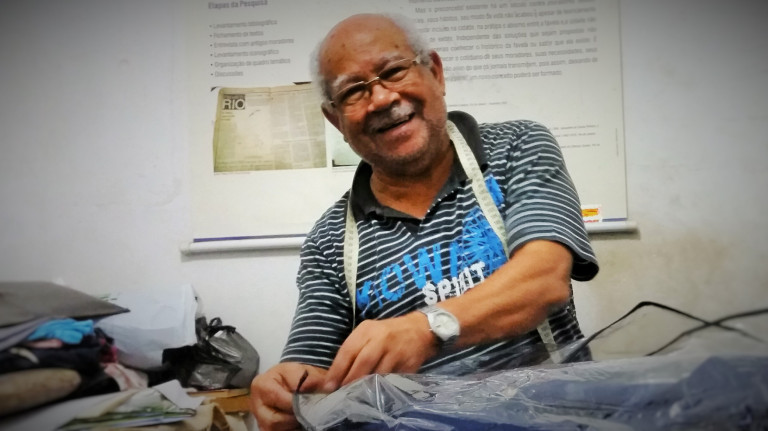 “I came from Maranhão, on the coast of Belém, in the steaming heat of November. My brother brought me to live here in Maré, in a little shack in Baixa do Sapateiro. He showed me the city, how it was, and then, on Monday, he went to work, and I was there alone. I took a bus downtown, I arrived in the main plaza, and there was an advertisement that someone was needing a tailor. At the time I would eat lunch at a Chinese place, the cheapest restaurant there was, and I didn’t eat dinner; I had a bit of coffee and saved the money. I didn’t have anything and I was thinking of buying a radio. But with the money I had I went out and I bought this sewing machine here. My brother arrived that night:

‘What?! You bought a sewing machine?!’

‘With this machine here I’m going to buy 10 radios, if we buy a radio we’re just going to lose the money we spent.’

And thank God that machine was the beginning of my work.” 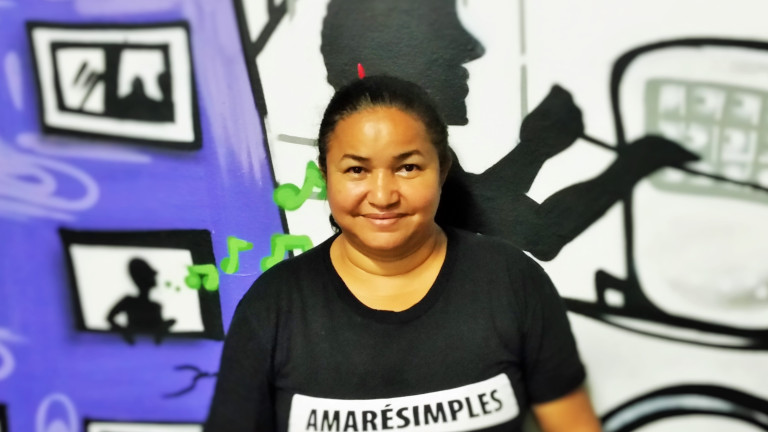 “In the future, 10 years from now, I hope for better things: peace, a better future for our children, a better government. It’ll be difficult. Those who enter politics already encounter rottenness, and they end up worsening everything, putting the money in their own pockets, causing more poverty, more violence. Here if there really were a good police force, a good president, I think it would be a really nice country. If there were more people who were honest, the world wouldn’t be the way it is today. That’s why I teach my daughters to not take others’ things, to not go into my bag to take money, that if they want money they should ask me directly. If I have it I’ll give it to them and if I don’t then I can’t. If you don’t teach them that way then they’re going to become what’s out there on the street, part of the violence, part of the mess. I try to say these things to at least change a little in the world of our youth, to see if it gets a little better. No one understands one another anymore, no one can look one another in the face anymore. What we’re needing now is love. What the people now are needing is love.” 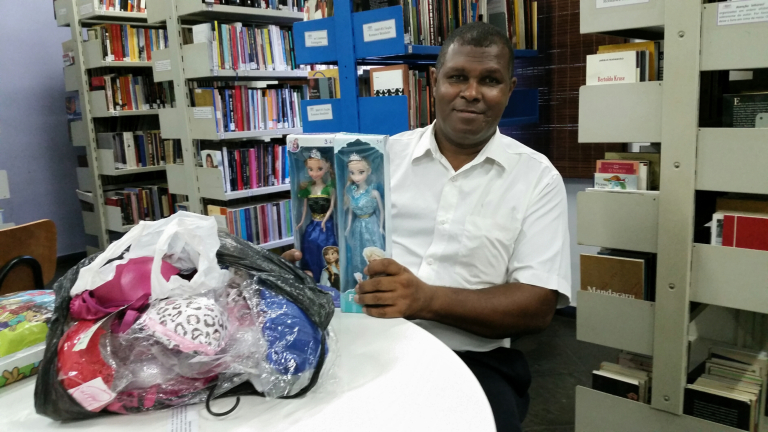 “God gave me an ability, a perception to know how to sell these things. I have a book with all of my clients–their names, the date they’re going to pay. I give them from the seventh to the tenth day of the month. At times there are people who don’t pay and I end up letting it slide; I leave the clothing as a present for them. Each month I make two minimum wage salaries, and with that money, as my father always said, I go floating my boat. I have my house, my rice and beans, money to leave and return home, to take care of my wife, my daughter, my family, and still some left over to help people when they’re in need. I’ll help someone buy bread; I’ll pay the bus fare for a group of children or adolescents so they can go out and have a good time; I’ll contribute to my church’s raffles with clothes and other things, for families and their children. I get immense pleasure from that, an immense happiness in helping these people.”

*Sascha Bercovitch is the creator of Favela Stories. He studied Latin American history at Harvard University and has lived in Complexo da Maré for the past year on a Trustman Postgraduate Fellowship.