Nine months after eviction by Rio’s city government, Carlos Machado Lopes and his family–his elderly mother (Jacy), brother (Edmilsom) and sister-in-law (Vanessa)–still do not have homes. Their home in Campinho was demolished without warning last May, and after dividing up a measly and delayed compensation among them, Carlos had to move in with a friend 30km away in Miguel Couto. He could only afford to buy a motorcycle and now works as a moto-taxi driver with his share of the compensation. Carlos’ ailing mother had to stay behind in Campinho in her daughter’s overcrowded and precarious house, while Carlos’ brother and sister-in-law are now renting a home since their share wasn’t even enough to buy property or start construction on a new home. “Here we are today,” says Carlos, “all of us without homes.”

Even worse than being without homes, according to Carlos, is the psychological and medical damage caused by the horrific eviction and zero lack of support from City government. “My mom was already sick, but she got much worse after eviction. She’s almost unrecognizable,” says Carlos, “I don’t even care about a house anymore. I want the City to help us with her medical care.” Carlos’ sister-in-law, Vanessa, suffered increasing medical complications after eviction, and miscarried three weeks later. Carlos’ sister, Valéria, and his mother both have had to seek psychiatric counseling, and he and his brother, while not seeking treatment for more urgent reasons like work, were both deeply affected by the experience. 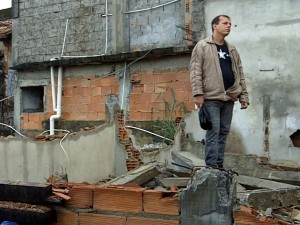 On May 12, 2011, with no prior warning, City government officials arrived at Carlos’ family’s newly built home in Campinho. “‘You’re going to tell us you didn’t know your house would be demolished?’ they told me,” says Carlos, “‘ We came to let you know that you will be going to a homeless shelter, and your things will be sent to storage.’” To begin with, officials presented documentation indicating the eviction of a different address than Carlos’. Even though Carlos provided documentation of the address and land purchase and insisted they couldn’t complete the eviction without the homeowner (his mother) present, officials insisted and even threatened him with an arrest warrant. With threats of, “open up, or we’re coming in,” Carlos’ pregnant sister-in-law fainted and was taken to the hospital, with no help from any of the many officials present. Carlos was given one hour to remove all his family’s possessions, many of which were ruined in the rain or broken by officials. Immediately after, his two bedroom/one bath home, with living room and kitchen, less than one year after construction, was bulldozed. 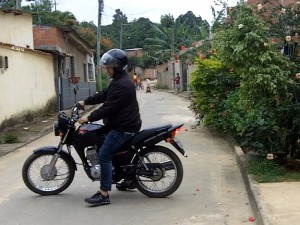 Even though Mayor Eduardo Paes promised that no evictions would take place without prior compensation, Carlos and his family spent the first week after eviction with nothing at all. Carlos’ brother and sister-in-law slept on the floor of the neighborhood church for the entire week. Carlos stayed at a neighbor’s house, and his mother returned to her daughter’s home, way up the hill. They eventually received three months of Social Rent (for only one family) and later, compensation of R$37,000 (less than US$22,000), to be divided up among all of them. “Only R$37,000 for three families… We worked with an engineer and can prove it: we built the structure of our house for several floors to support three households,” says Carlos.

The community of Campinho was offered apartments in public housing units in Cosmos (14 stops away on the train, two hours away by bus with traffic, and 20 miles away by car). “I told them I had a sick mother, and her whole life was here in Campinho. My daughter’s school is here. I have to be here,” says Carlos. Carlos tells of other community members who, faced with such pyschological pressures by City government, accepted units in Cosmos, and, after suffering tremendous hardship like lack of employment, left Cosmos looking for other opportunities. “This is why we didn’t accept the offer, because of my mother’s condition. And while our house was for all of us to live in, the priority was our mom, (we built it) for us to be further downhill, because it’s too high for her (to climb the hill),” tells Carlos.

Ever since Carlos was a child, his parents made tremendous sacrifices to raise him and his brothers and sisters. His mother suffered from cancer and serious health problems early in life forced her to send the boys to boarding school so that she could take care of her medical treatment. After years of communicating by mail, his mother came home from the hospital and brought the boys with her to Campinho where they began working odd jobs to contribute to the family income, from carrying water uphill for neighbors to helping their dad make box cars and sell them at the farmers’ market.

The building of their now demolished home was a family project. Carlos’ brother bought the land from the Campinho Neighborhood Association, who offered the land as a way to help the family. Carlos’ mother is still paying off a loan she took out to pay for construction and an engineer. Since they couldn’t contribute financially, Carlos and Edmilsom helped out with physical labor. They built the house’s foundation to support three floors for three households. They finished the first floor’s roof quickly so their mother could move down the hillside as fast as possible. “We had our home there. We were going to move forward. We had three supermarkets, a hospital, everything close by for my mom.”

Listen to Carlos’ testimony about what the City could have offered his family: