The opening ceremony of  Rio 2016 will officially take place this Friday when the Olympic Torch, having journeyed all the way from Greece, will be used to light the Olympic Flame in the famed Maracanã Stadium. Carrying the Olympic torch is considered by many to be a great honor and some of Rio’s favela residents, like Rene Silva of community newspaper Voz da Comunidade and Thiago Firmino of Favela Santa Marta Tour, have been asked to participate as the torch approaches the city.

However, the current “state of calamity” faced by the State of Rio due to budget shortfalls, has led many see the torch as a symbol of Rio and Brazil’s misplaced priorities. Since the 2013 protests that began as an uproar against rising bus fares but which shortly thereafter incorporated an indictment of the 2014 World Cup and Brazil’s spending priorities, people have questioned how all levels of the Brazilian government continue to fund projects related to mega-events. And the situation has reached a boiling point in Rio where hospital workers, police officers, firefighters, and teachers haven’t been paid for months.

This sentiment of an Olympic Torch that brings with it both pride and shame is perhaps most acute in the Baixada Fluminense, Rio’s large outer suburban region. Though home to nearly a quarter of the population of the state and responsible for 14% of its GDP, the people that live in the 13 municipalities that make up the Baixada Fluminense have for decades been subjected to clientelism, poor public services, and high levels of violence. Over the course of the last few months as Rio prepares for the Olympics, 11 people running for city council or mayoral positions throughout the Baixada have been murdered, likely due to ties to militias. But the Wednesday August 3 torch relay through several cities of the Baixada was meant to showcase its positive side through music, dance, and a celebration of the region’s athletes.

“I was complaining about the torch last week but I decided to come to see it for my niece,” said Duque de Caxias resident Andrea. “The situation here has everyone thinking its absurd to have the torch, but I think its important for Alice here to do patriotic things. This is a forgotten city and seeing the torch is validating; it’s cool.”

However, as Andrea and many others waited across town for the torch to pass in front of City Hall, police used tear gas, rubber bullets, and pepper spray to disperse a group of protesters who allegedly threw rocks toward the torch procession in the Vila São Luiz neighborhood. Local news outlet O Caxiense published a Facebook Live video that has already been seen over a million times showing protesters and bystanders, including children, running away from the police crackdown.

On Saturday July 30, Fórum Grita Baixada and several other local organizations and social movements held their own torch relay, dubbed the “Torch of Shame” to highlight the neglect that has characterized the region. Torch of shame, black and unlit with running red paint symbolizing the bloodshed in the region, was a “symbol of mourning and of the struggle for peace and life” in the Baixada. A pamphlet distributed throughout the relay in nine municipalities of the Baixada expressed local concerns: “We, residents of the Baixada Fluminense, receive the Olympics with a mix of happiness and a lot of pain. Happiness because we welcome the Olympic spirit of promoting peace, friendship, and goodwill between peoples. Pain because the State of Exception to Rights looks after our beloved Baixada.” 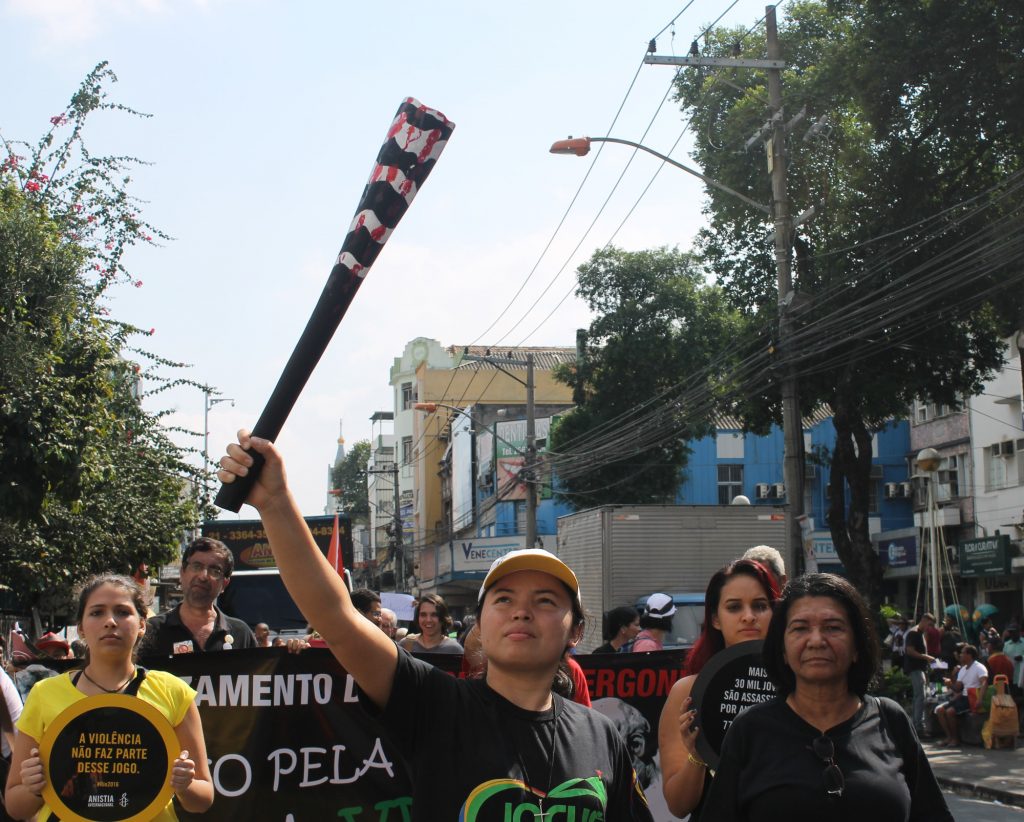 Douglas Almeida, member of Fórum Grita Baixada and one of the organizers of the “Torch of Shame” relay, reiterated this sentiment: “By calling together different institutions to take part in the torch of shame relay, the Forum Grita Baixada reaffirms its mission to unite various struggles within the region to give visibility to the problems that residents face in their daily lives. The torch of shame relay wasn’t a ‘no’ against the Olympics, but a ‘no’ against the negligence of our public officials toward the people of the Baixada Fluminense.”

Though violence and neglect have stigmatized the Baixada, the actions of the Fórum Grita Baixada represent a sense of regional pride and shared struggle. Misguided and corrupt politicians are those that bear the torch of shame. The O Caxiense video served as a reminder for many of the perverse priorities and forms of implicit rights violations and explicit state violence that dominate politics in the region. Reports claim that the protesters at Wednesday’s official torch relay were teachers; teachers who likely haven’t been paid in months.

Similar repressive tactics were also used against teachers and other public servants at a torch protest on July 27 in Angra dos Reis, one of the torch’s first stops in the State of Rio and to the southwest of the Baixada Fluminense. In response to the excessive use of force by police, the Union for Education Professionals in the State of Rio in Angra do Reis (SEPE) released a statement condemning both police violence and the precarious situation that many residents of the State of Rio find themselves in: “Are the passing of the Torch and the image of the city in the media worth more than the lives lost or neglected every day by the lack of hospitals, a quality education, and essential social services for our citizens?”

In the Praça do Pacificador, Duque de Caxias’ central square, university professor Oswaldo Barros held up one of the few handmade protest signs visible at Wednesday’s torch ceremony: “We don’t have security, we don’t have health. This torch is just to manipulate the people here. They don’t have access to a good education, many don’t know their rights. We are living a crisis of governance.” 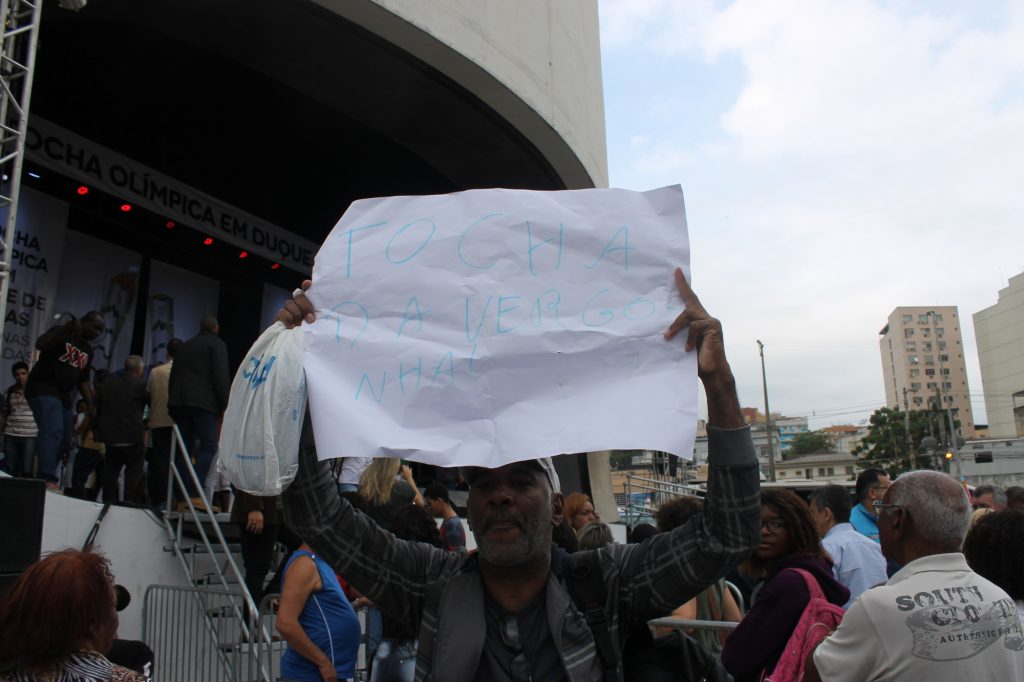 However, many who came to the ceremony were both fully aware that policymakers had abused their rights yet still saw the arrival of the Olympic torch as a historic moment. “This means a lot,” said Maria Regina as she wiped tears from her eyes when the torch arrived on the stage of the Raul Cortez Theater designed by Oscar Niemeyer. “Our whole lives we’ve been waiting for something like this. This is a sacrificed city, it’s not very well taken care of. Having the torch here is an enormous satisfaction.” 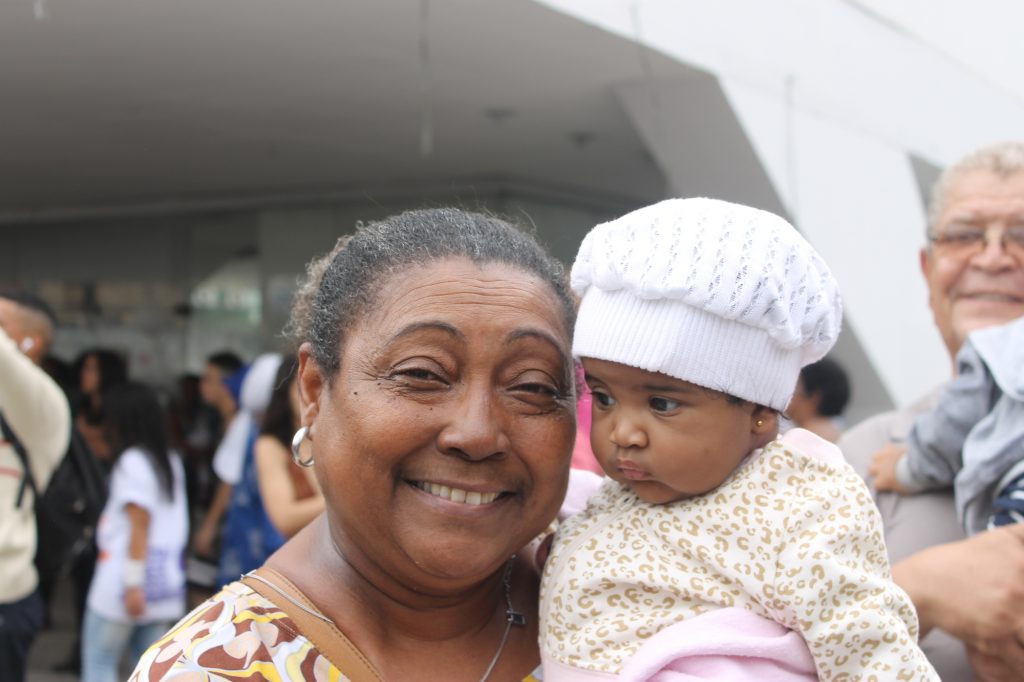 The Olympics opening ceremony on August 5 will kick start nearly two months of Olympic and Paralympic Games. The world will be watching what other sacrifices Rio’s residents will have to make to ensure the Games are a success, but historic and systemic negligence and violence are likely to still dominate once the Games come to an end.