From August 9 to 13, artists, activists, and community members came together to repaint a wall in Pedra do Sal, located in the heart of historic Little Africa in Rio de Janeiro’s Port Region. Titled the Sankofa Project, the mural painting was used both to highlight the important history of the region and to celebrate the 65th anniversary of the Afoxé Filhos de Gandhi RJ, a local carnival group that plays the rhythms of African religious music and promotes the values of Gandhi.

The Sankofa Project is named after the Adinkra ideogram of the Ashanti people of Ghana which represents looking back to the past in order to continue moving forward. Using spray paint and stencils, the project has created a beautiful mural that combines imagery from Yoruba, the cultural region of origin of many enslaved Africans brought to Brazil, Afro-Brazilian historical resistance figures, and the modern day reality of many Afro-Brazilians. 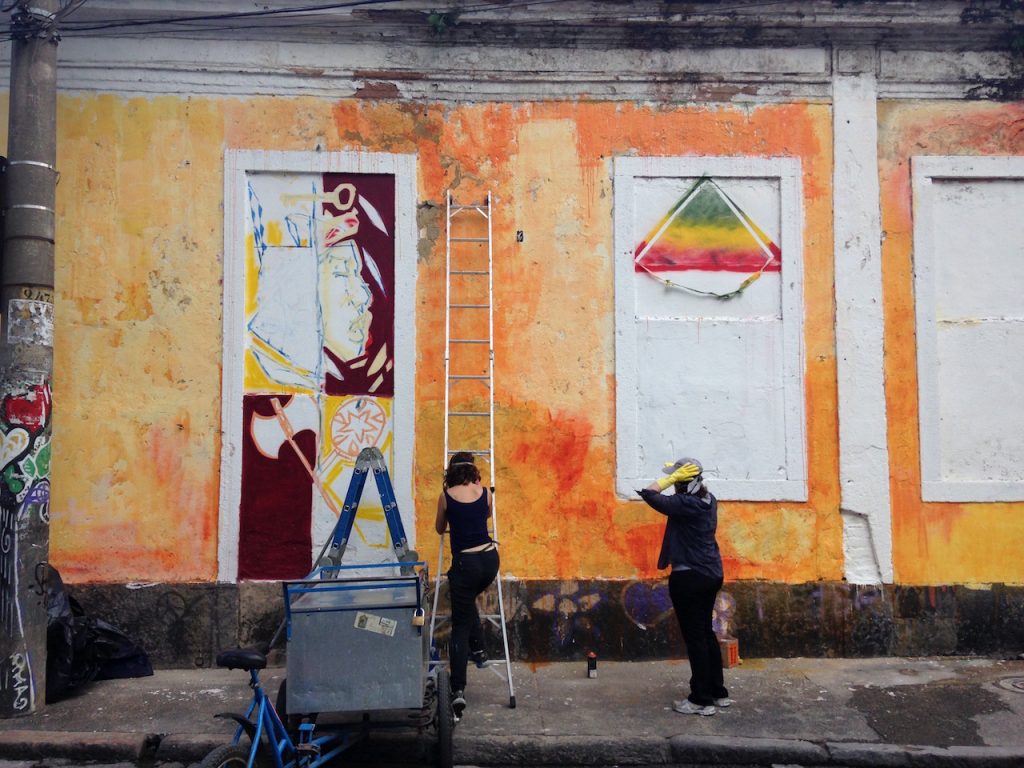 Just a ten minute walk from the sparkling new Olympic Boulevard, where the Museum of Tomorrow is located and big screens currently broadcast the Olympic Games, Little Africa encompasses the original port region where an estimated two million enslaved Africans were forcibly brought into Rio de Janeiro, the world’s biggest slave port, during Brazil’s brutal and long era of slavery.

Following the abolition of slavery, the region around the port became known as Little Africa, an area where Afro-Brazilians, freed slaves, and Africans went to live, find support, work, practice their religion, and artistic forms of expression. Pedra do Sal was first used by the Portuguese to trade salt and Africans during the slave trade. It later became a place where Afro-Brazilians would practice their culture and religion in secret. This area is considered to be the oldest black neighborhood in Rio de Janeiro.

While parts of the port region have received investments under the Porto Maravilha (Marvelous Port) port revitalization program, Pedra do Sal and its traditional quilombo community have been overlooked. President of the Pedra do Sal Quilombo, Damião Braga, says: “We’re 200 meters from what they call the Olympic Boulevard. Over there is the first world and over here is the third world. This same government is doing all of this urban restoration of the Port region. The same government has an obligation to give title to the Pedra do Sal Quilombo territory.” 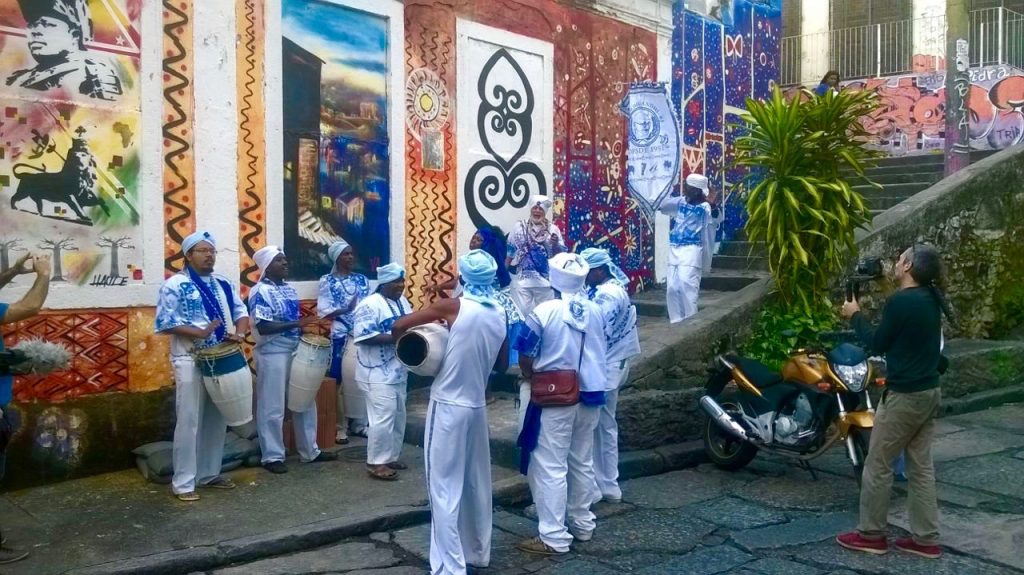 Since 2011, Rio’s government has poured millions of dollars into the port redevelopment plan, executing major urban projects such as a new light rail tram line and the Museum of the Tomorrow. Although the program includes Little Africa on its website as part of its African Heritage Circuit, the region has received little investment from the government project.

Artist coordinator of the Sankofa Project, Vanessa Rosa, argues that the mural painting is a way of calling attention to this historic area and its relative neglect: “The point of doing this is as an opposition, as a counter position to what is happening in Porto Maravilha. For me it’s strange that they would invest so much in one specific street and so many wall arts there and ignore the rest of the Port Zone which needs far more attention.”

The project was funded entirely through a crowdfunding campaign. Organizers say they chose this funding method to avoid a corporate sponsor becoming the main actor and to highlight the collective nature of the project. Rosa said: “[We wanted] to show that we can do independent actions, be more coherent, and have organizations of our own. Not always waiting for someone to go there and offer money.”

The crowdfunding campaign raised just under R$7,000 which covered the cost of the art materials and a film crew to document the event. All artist involvement was voluntary. The project was supported by local residents and active community organizations such Favelarte based in the nearby Providência favela and Casa da Juventude.

Graffiti artist and Candomblé practitioner Joyce Oliveira participated in the painting of the mural. She said: “[Pedra do Sal] today is a space that has movement, there’s the samba here for example. But it remains excluded from the grand Olympic circuit. So you can see that there still is this colonialist thinking. They don’t recognize this place here as important.”

By revitalizing Pedra do Sal’s walls through a grassroots collective art project which honors the area’s Afro-Brazilian culture and history of slavery, the Sankofa Project hopes to draw recognition to the significance of this neglected part of the Port Zone. According to the project mission statement: “During the confusing times of the Olympic Games in Rio de Janeiro, we want to create artistic work about symbols and the city’s past… to really encourage people to discuss this sad part of the city’s history and think of ways we could make it more visible.”