Three years after government officials announced that Rocinha in the South Zone would be the third favela in Rio to receive a cable car transport system from the second phase of the Growth Acceleration Program (PAC 2), community activists continue to demand that the funds for the project be redirected to address more urgent priorities. The Rocinha Sem Fronteiras (Rocinha Without Borders) group has actively opposed the installation of the cable car since the plans were announced in 2013, contending that the R$152.2 million allocated for the cable car should instead fund long-awaited sanitation infrastructure upgrades.

Founded ten years ago in order to engage residents in regular dialogue around pressing issues, Rocinha Sem Fronteiras has been a central actor in various grassroots initiatives in the community. According to co-founder Simone Rodrigues, while the mission is to discuss civil rights and the unique challenges faced by residents of Rocinha, the organization differs from other community initiatives in its emphasis on public participation. “This is a collective–people come here to learn and to teach. We’re trying to build and mobilize together,” she explains.

Co-founder José Martins de Oliveira says: “The objective of the group is to come together once a month to discuss urgent issues affecting the community. In addition the group also hopes to spread awareness of the civil rights of residents of Rocinha.” 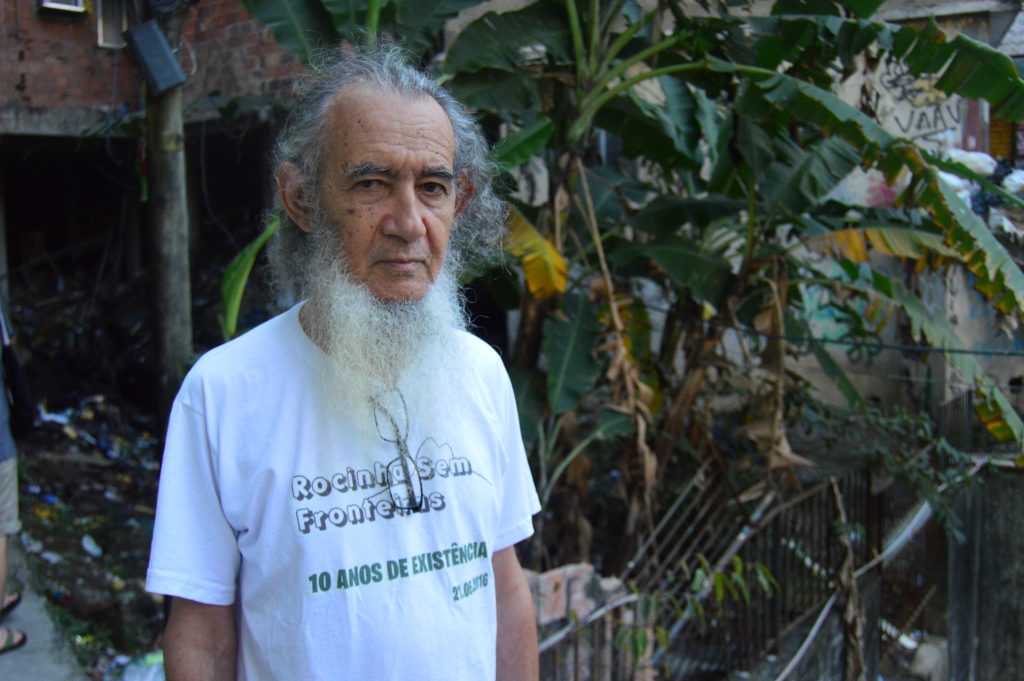 The organization’s principal campaign concerns the planned projects of PAC 2, which include the installation of a cable car system and a series of sanitation upgrades. While the majority of the project’s R$457 million budget is slated to fund the widening of streets, installation of storm water systems and development of sewerage systems, Rocinha Sem Fronteiras contends that these interventions alone will not solve the desperate state of sanitation in the community, where raw sewage falls freely in 23 locations across the favela.

The density of Rocinha produces limited ventilation which, compounded with insufficient garbage collection and formal sewage infrastructure, establishes a breeding ground for infectious diseases. For decades, Rocinha suffered from the highest rates of tuberculosis in Brazil, with a national rate of infection of 37.5 cases per 100,000 people and a rate in Rocinha of 380 per 100,000 people. Cases of tuberculosis did decrease substantially after the PAC-funded expansion of Rua 4 in the most critical corridor, however sanitation improvements remain desperately needed.

“We’ve taken the state to court and the community hopes that the judge will determine that they must finish the proposed works,” says José Martins de Oliveira. “It’s nothing more than the government’s obligation to channel the sewage.”

The planned cable car, however, activists argue, would merely be a white elephant–attracting tourists while failing to serve the basic needs of residents. The experiences of Complexo do Alemão and Providência, the first two favelas to receive cable car systems, have only reinforced this position. Rocinha Sem Fronteiras members regularly point out that the cable car in Complexo do Alemão has become a popular tourist destination, while only serving as transport to 7% of the population.

More recently, Brazil’s political crisis has also thrown the fate of PAC in Rocinha into question, leaving both the cable car and sanitation upgrades vulnerable to permanent suspension. While it remains unclear whether any of these projects will be completed, the failure to complete essential sanitation upgrades has further reinforced the community’s distrust of the government’s ability to deliver these services.

Cleber Araújo, who works with the community television network TV Tagarela, explained at a recent meeting that the government’s relationship with Rocinha remains a principal focus of the organization. “We try not to reproduce the argument from the mainstream media that the favela is a place of problems, a place of death. We try to talk about other forms of violence here, especially the lack of basic sanitation,” he said.

For the time being, Rocinha Sem Fronteiras will continue its campaign opposing the installation of the cable car and suing the government in order to require authorities to return to the promised sanitation works. The group visits the Public Ministry on a monthly basis and recently delivered a set of demands to the government. The demands were crowdsourced over the course of several community meetings and cover a host of issues raised by residents, including improving public participation in government projects, increasing bus service at night, painting clearer pedestrian crosswalks, guaranteeing spots at nearby public daycare centers and schools for children in Rocinha, among others.

Watch our social video on the sanitation situation in Rocinha: