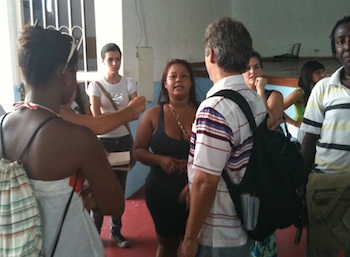 Several participants either directly or subtly mentioned communication and conflict mediation as central to their work. “I believe women are more versatile and know how to achieve things through diplomacy… we are more careful and know how to minimize conflict,” shares Leidimar Machado, who has worked with children and youth in Caixa de Surpresa for several decades in Bangu. One participant, in particular, stood out for her confidence in a talent for mediation. Cíntia Paulo Luna of Morro do Fogueteiro told us: “I am a great conflict mediator. I resolve 100% of problems the first time I sit down with all parties involved.”

As the first female president of the Santa Teresa United Residents Association (AMUST) and mother to three daughters (18, 16 and 10 years old), Cíntia has years of experience with conflict mediation, both at home and on the street. In fact it is because of the relationship between home and street that she began her career as a community leader when she became active in the Neighborhood Association because of a lack of activities in the community for her own children.

A common part of Cíntia’s job is resolving conflicts among residents, and examples abound of her experience and success as residents turn to her for help with any and all problems in the neighborhood. One resident, for example, complained on multiple occasions about a leak from the neighbor’s house which flooded his own. When attempts to talk with his neighbor proved futile, the frustrated resident drove a hammer into one of the neighbor’s walls. The angry neighbors called on Cíntia to mediate. 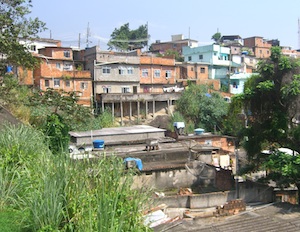 “What I tried to do was get them to reason,” tells Cíntia. “I said, look, he tried to talk to you about this a lot, and sure, he was wrong to damage your wall like that, but let’s try to understand what was going on before now.” The result: the neighbors split the cost of repairing the wall and the leak. Cíntia often employs this strategy of getting residents to reason and look at the situation from the other’s perspective.

On another occasion, a resident opened a new window in her home to allow more air to flow through her child’s room, but her neighbor complained that the new window opened onto her porch and took away her privacy. When Cíntia was summoned, the first thing she did was invite the complaining neighbor into the other woman’s home to check out the window from the inside. “I asked her to take a look for herself, to see if she could actually see onto her porch. What I did was let them analyze and reach a conclusion, the same one I had already reached, themselves.” 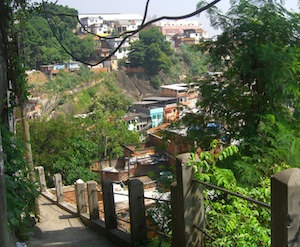 There are many themes which dot Cíntia’s history as a community leader. Strengths gained from motherhood translating into strengths as a community leader is certainly one of them. One of these Cíntia calls the “motherly eye,” and she asserts that it is essential to effective conflict mediation. In a room full of youth participants in any of Morro do Fogueteiro’s activities, you have women and men in charge. “Let’s say there’s one kid who’s constantly messing up. While a man will be quick to admonish and punish, a woman will sit back and think, ‘now, why might he always be getting into trouble like this? Well, to start with, I know his family situation… we women look for the reason behind the mistake.’”

Cíntia is also quick to explain that some may suggest this is a less practical approach. “It’s not that men are more practical; it’s that there is variety in practicality, and women’s practicality isn’t harsh or rushed.” Cíntia also claims that practicality does not automatically equate to effectiveness.

Another theme is how interactions with men may be different because of the presence of a female mediator. Cíntia interestingly paints two very different responses to a female authoritative presence. Sometimes “men become calmer and try to be more polite, even when they want to say, ‘Look, don’t get involved.’” There are others, however, when one may hear the response, “‘How am I supposed to take orders from a woman?’” Cíntia shares that in situations like the latter, she has to assert herself, but she also adds, “Even when I have to assert myself, I try not to be aggressive.”

While discussing differences in men’s, women’s and the community’s reactions to certain situations, their strengths in leadership, and family dynamics, Cíntia wisely expresses the value in diversity. When she talks about the different approaches between men and women, she clarifies, “We know we need both of these types of approaches.” Most important in her work, Cíntia stresses, is community participation, “We want greater community participation, we want men and women.”