Rio de Janeiro’s favelas are recognized by foreigners and Brazilians alike for an array of unique and often contradicting qualities: highly visible on Rio’s urban landscape, they serve as emblematic reminders of the stark wealth disparities of the Marvelous City. Frequently the subject of media representations, favelas are recognized both for their cultural contributions to the city, as well as for violence. Indeed, the drug trafficking organizations that operate within some favelas clash periodically with each other, police or militias, often garnering media attention. Because of the social stigmatization of these favelas as spaces of danger and poverty, a rigid conceptual divide exists between the asfalto, or the formal parts of the city, and the favela, which is both reflected and reinforced by media representations of the violence within these communities.

The 2016 Olympic Games in Rio de Janeiro brought a dramatic increase in international media attention to the city, throwing a spotlight on many aspects of the marvelous city, and prompting augmented public scrutiny of many of the city’s problems associated with inequality and poverty. With this scrutiny came increased pressure on the Brazilian government to showcase Rio de Janeiro in a positive light. In particular, during the lead up to the mega-event, numerous international media sources focused increased attention on favelas, reporting stories of violence and discussing the often negative role of police in these communities.

In this changing global media landscape, I sought to examine whether the Brazilian media’s representations of favelas also changed. My study analyzed the prominent Brazilian newspaper O Globo, examining the paper’s coverage of Rocinha. Rocinha is one of the largest and most densely populated favelas in all of South America, with population estimates ranging from 101,000 to some 300,000. Because of its location in Rio’s wealthy South Zone, Rocinha receives significant attention from the media, government, and foreigners alike, and is thus an apt choice for an analysis of media representations of favelas.

O Globo is known for political conservatism and pro-government bias, evidenced by its support of the Brazilian dictatorship of the 1960s-1980s and its continued endorsement of conservative government activities today. Its coverage of favelas traditionally reflects certain class prejudices that endear it to its largely middle and upper class reader base. As the principal newspaper of the largest media network in the nation, O Globo is highly influential. For all these reasons it thus served as a useful subject for an examination of changes in media representations of favelas as a response to the Olympic Games.

The study selected two sample date ranges for a cross comparison of O Globo’s representations of Rocinha. The first date range selected, January 2009 to December 2009, established a baseline of O Globo’s coverage of the favela prior to and during the announcement that Rio would host the 2016 Olympics. The second date range, January 2015 to February 2016, provided a sufficient window for comparison. Within each time period, an average of 18 articles were qualitatively analyzed for their coverage of subjects like violence, favela residents, and favela expansion. These findings were then compared to assess how, if at all, O Globo shifted its rhetoric around the favela in the pre-Olympic years. 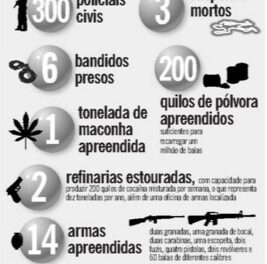 Analysis of the first date range of O Globo articles found that the paper emphasized two major discussions: Rocinha’s expansion and the ongoing conflict between drug traffickers and police. O Globo tended to under represent favela residents themselves in its analysis of events in Rocinha, and primarily portrayed the space as a center of problems like violence and poverty. Frequent reports catalogued the sporadic outbreaks of violence between police and traffickers. For example, a police raid of Rocinha in March 2009 generated a cluster of detailed articles on the statistics of the police operation, which involved 300 police officers, the seizure of 200 kilos of gunpowder and 1 ton of marijuana, the arrest of six “bandits,” and the deaths of three “suspects.” Graphic images of the operation such as the one above accompany these articles, in which the identity of the body in the photo is not specified. Another article (“Rocinha: polícia estoura refinarias do tráfico“) put the details of a police operation into an infographic to help explain and highlight key data.

The other topic of frequent coverage–Rocinha’s expansion into the forest–was frequently framed through the lens of either overpopulation or of environmental degradation around the favela, rather than, for example, the unmet need for housing this expansion represented. Reporters presented concrete details and factual descriptions about the favela’s expansion; for instance, in April 2009, an article titled “Almost 50 houses bored into the eco-limit of Rocinha” (“Quase 50 casas ‘furaram’ ecolimite da Rocinha“) describes the “invasion” of 48 families into the forest surrounding Rocinha, emphasizing it as an ecological area that “must be preserved.” Other times concrete statistics give way to subjectivity; for instance, five different articles use the word “disorderly” to describe Rocinha’s expansion.

Follow-up reports on the favela’s growth chronicle a month-long debate over a proposal to build a three-meter high concrete wall (repeatedly referred to as an “eco-limit”) around the perimeter of Rocinha to control the outward expansion of the community, a proposal which was vocally supported by residents of the wealthy neighboring high-rise community São Conrado. In May, the president of the São Conrado Neighborhood Association published an article in the O Globo opinion section in which he called the new housing constructions in Rocinha a form of “environmental degradation.” When the plans for the wall around Rocinha were eventually changed after protests and resistance by Rocinha residents, an O Globo reporter referred to a meeting among Rocinha’s community leaders opposing the wall as “inflammatory political discourse.” In all, reports on Rocinha during 2009 discuss the violence, conflict, and controversy in the community during this time, and marginalize the point of view of the favela’s residents in their representations.

In the second date range, O Globo’s representations of Rocinha underwent a dramatic sanitization from their previously explicit portrayals of the violence and expansion of the favela. With less coverage of police raids and population growth, a majority of articles instead focused on human interest stories and community improvement initiatives within Rocinha, bringing in the voices of favela residents. Despite their newfound inclusion in the newspaper’s representations of Rocinha, favela residents were tokenized by O Globo. In the context of the state’s heavily branded Pacifying Police Units (UPP) program which had been launched in the community in 2012, the stories of encounters with violence, and moreover any negative aspects of favela life, were all but erased from the paper’s representations.

For example, one February 2016 article profiled a champion tennis player from Rocinha who had won a national title and returned to the favela to open a sports school. The reporter includes a quote from the athlete, who says that tennis “helped [him] to have discipline and education, and to stay far away from violence,” and notes that the school provides “an opportunity for Rocinha to create athletes and citizens.” The last sentence of the article includes a brief reference to a conversation between the tennis instructor and police officers from the Rocinha UPP.

Another O Globo article published in February 2015 discussed the youth population in Rocinha, including testimonials from residents about the future of the education and health systems in their community. Clearly taken from within the favela, the accompanying photograph shows the interview subjects head-on, with the rooftops of Rocinha rising up behind them into the distant background. Photos like the one above, with the faces and names of favela residents transparently presented to the O Globo readership, have no equivalents in the 2009 date range.

Favela residents were also quoted in coverage of subjects indirectly related to Rocinha. For example, in a February 2015 article on the extension of Rio’s metro line, the reporter mentioned 20 Rocinha residents who were invited to visit the project site alongside the State Transport Secretary. The article highlighted the benefits residents would receive from the project due to their close proximity to the metro line and their new access to the city. In contrast, it was rare to see articles during the 2009 date range that included Rocinha residents’ voices in broader discussions beyond the boundaries of their community.

Meanwhile, coverage of violence all but disappeared from O Globo’s representations of Rocinha. Only one article in the second period analyzed mentioned an act of violence perpetrated in the favela. Others discussed the UPP that was installed in the favela in 2012, but only in general terms. A typical description of the UPP portrayed the new police forces as “answering the community’s demand” and “retaking the territory” that had been the subject of “decades of abandonment.” In July 2015, an O Globo article on UPPs across the city said the police forces were responsible for saving almost 1,000 lives, lowering homicide rates by 65%, reducing deaths resulting from police action by 85%, and winning the support of community members that they protected. No testimonial from a resident was invoked to support this claim.

Between the two date ranges, O Globo moved from in-depth reporting on the conflict between drug traffickers and the State and the expansion of the favela to a much more light hearted discourse, reducing its coverage of violence and supplanting this news with softer coverage of human interest stories and community improvement programs that highlighted Rocinha as a safe community. This shift affected its representations of Rocinha residents, who were previously excluded from mention by the paper but in 2015 gained a presence when their words and activities were used to bolster government policies. At the same time, the drug trafficking groups that continued to operate within the favela and clash with police received relatively little coverage in the second period. By excluding these stories from its representation of Rocinha, the paper failed to holistically portray the realities of life for many favela residents, who continue caught in the midst of a power struggle between the two conflicting forces in their community.

In the place of its previous critiques and sensationalism of violence and expansion in Rocinha, O Globo pivoted its approach to instead focus on the positive gains made by residents and government programs in the community. What could have accounted for these changes in discourse? The need to show off the city’s attributes with the approaching Olympics? Marketing of the UPP policing program? Or perhaps a combination?

Regardless of the reason for shifts in the discourse around Rocinha, these alterations reflect a new conceptualization of favelas in the eyes of both the Brazilian media and its readership. If the 2016 Olympic Games did indeed condition a change in the discourse around these communities, what will happen to the public image of informal settlements like Rocinha now that the Games are over and the world’s attention is no longer on Rio?

Suzanne Caflisch holds a Bachelor of Arts in Peace and Conflict Studies from the University of California, Berkeley. Upon graduation she was awarded the University of California Human Rights Center Fellowship, and is currently working in partnership with the Brazilian non-profit organization Instituto Promundo on researching social norms around the practice of sexual exploitation of children and adolescents in Rio de Janeiro.