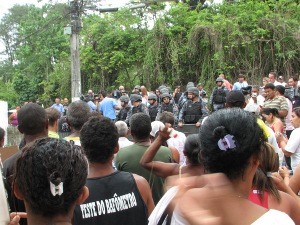 This past week, residents of the community of Vila Taboinha, in the far West Zone of the city of Rio de Janeiro, were faced with their forced eviction and successfully resisted.

Residents settled in the area just 6 years ago, when it was still a swamp, and they worked together to fill it in and make the land usable. About 4 years later, a construction company along with a group of individuals that own the lots got together to file a lawsuit to get the residents out and develop the land. However, the law states that the owners must bear the costs of evicting squatters and clearing their homes, as they are responsible for the abandoning of the land, which allowed for squatters to settle in it, but the owners refused to do so. Now in 2010, for some reason, the government has decided to take matters into their own hands, when a Judge ordered the police to execute the eviction order this last tuesday. 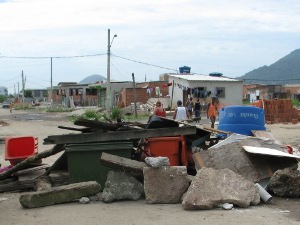 Several news crews were covering the situation for most of the day: television crews from Globo, Record, RedeTV, TV Brasil and Band, news radio station CBN and newspapers Extra, Estado de São Paulo and O Globo. I asked why these events today were a story to the mass media, while the demolition of homes in Favela do Metrô the week before was not, one journalist explained to me that there was a rumour that Taboinha was controlled by militia, it was even said at Globo early in the morning that there was a stalemate between police and militia in the area. That was the story the media was looking for, not plainly the violation of housing rights of innocent, poor Brazilian citizens. It was then the resilience of the residents of Taboinha that kept news crews in the area all day.

Later that evening, Globo played its news report on RJ TV, the local evening news. The anchor starts out referring to the community as an “invaded area”. There are interviews with the attorney that represents the owners of the land and with a public defender from the Núcleo de Terras e Habitação, which represents the residents of Taboinha. The attorney says that residents had been notified since 2007, and that now unfortunately the removal will have to take place against their will, and the public defender Alexandre Mendes reiterates that reinstatement of ownership of the lots can happen as soon as there is an adequate housing alternative for the residents. Later, the police and residents at the entrance of the community clashed. Although the reporter acknowledges that “we don’t know exactly how” it started, no resident is heard on the matter, instead the anchor at the end of the report states the Police’s official line, that teargas bombs were used to protect the physical integrity of the officers. What really happened is that the Commanding Officer along with the Court Official entered the community to assess it somehow, and almost all the cameras followed them in. After a few minutes of them wandering around followed by the press corps, we hear blasts back where the residents were gathered, and we see the gas grenades flying and residents running and screaming back into the community. Some residents did throw rocks at the police after the confrontation started, but there is no footage that unequivocally places the first strike on either side. Only two cameras stayed behind and took video of the police firing into the community, they were from Rede Record and activist journalist Patrick Granja of the A Nova Democracia newspaper. However, were the confrontation intended by either side or not, it was soon under control and both sides had enough restraint to stop the worst from happening. 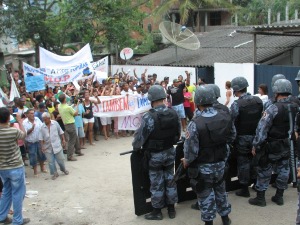 The Housing Sub-Secretary of Rio de Janeiro then arrives and is interviewed about the “agreement” made, which determines that residents who are evicted will be granted the 400-real-a-month Aluguel Social and placed in the queue for the Minha Casa Minha Vida programme, through which they may be permanently housed. That “agreement” is exactly what the movement against the eviction of poor communities in Rio de Janeiro is opposing. In the words of Altair Guimarães, president of the Vila Autódromo neighborhood association, the Minha Casa Minha Vida programme is very good for those who don’t yet have a home or a “life”, which is not the case for any resident in Vila Autódromo, Taboinha or any of the other communities that are currently under threat. What every community wants preserved is the greatest value every community holds, the closeness that residents have with each other’s family, their ability to depend on and trust each other, all the reason this shared living area can be called a “community”, again in Altair’s words “it’s not a matter of four walls”.

Thinking of the news media as a defender of human rights and democracy, we in Brazil are terribly underserved. Most local newspapers and television stations only serve the official line and big business and government interests, so that human rights in Brazil will depend completely on the efforts of alternative media and community journalists and websites such as this one.