Saturday, September 10 marked the beginning of Primavera Afro (Afro Spring) and the 6th edition of the Feira Crespa, with the goal of recognizing value in black culture and black beauty in Rio de Janeiro. The event took place in Campo de Santana park in Rio’s downtown area, where about 150 people gathered throughout the day to discuss institutional racism and black identity, display fashion created by black designers, practice capoeira, dance to hip-hop and black Brazilian music, and support local black entrepreneurs and artists.

The name of the event, Feira Crespa, literally translates to curly or kinky hair fair, reflecting the movement of black women across Brazil towards accepting their natural hair and embracing afrocentric styles such as braids, twists, or dreads, rather than straightening, in rejection of white beauty standards and promoting racial awareness. Although this movement is not at all new to Brazil, as there were waves of people wearing their hair naturally as a political statement in the 1930s, 60s, and 70s, the movement has grown stronger in recent years.

Saturday afternoon began with a panel of four black women discussing the psychological trauma racism imposes on black girls and youth starting as early as elementary school. Marcela Lisboa, activist, journalist, and member of Casa da Juventude stated, “[Racism] also is a psychological violence. Actually, now, the fact that we have natural, curly hair, tall afros and braids, is a fact that we are liberating ourselves from the images of psychological violence that cast us as ugly, because we are not.”

A recent YouTube video titled “Preconceito na Escola, Como Lidar?” (Prejudice in School, How to Deal with It?), created by black stylist, Rayaza Nicácio, provides a window into such trauma. She discusses with her nine-year-old niece the difficulties she has already endured because of the texture of her hair. Her niece talks about hating her hair, wanting to straighten it, and avoiding going to school because she was told by her peers that her hair was ugly at a young age. She explains, between outbursts of tears, how when she was four she chemically straightened her hair and that it began to fall out a few years later. She took medicine and began to let her hair be natural. At the end of the clip, she states that she will never straighten her hair again, that she loves it the way it is, and if people have a problem with it they can leave. Videos, clips, blogs, events, and marches encouraging black empowerment and raising awareness of racism inherent in the favoring of white, eurocentric beauty standards are currently emerging throughout Brazil.

Although the kinky hair movement, embracing African dress, or other black aesthetics can be very powerful for some women, Leticia Santanna, internationalist and tourism professional, affirmed that there’s more than one way for empowered black women to dress and style their hair.

“We need take care to understand that a black woman, if she wants to be feminine, does not have to use a  certain type of clothing and be totally African in order to be the stereotype of the black girl activist. She doesn’t need to be anything. She can be what she wants to be, just like a white girl. I think that the illusion of liberty we understand is that we do not need to dress stereotypically.”

Joice Silva, Brazilian Olympic wrestler who competed in both the London 2012 and the Rio 2016 Olympics echoed similar sentiments, stating that what is most important is that black women feel good about themselves. “It is true we have freedom. We can do what we want. Do what you want. To want to straighten, or not straighten [your hair] too is beautiful. If you feel beautiful, it’s okay.” 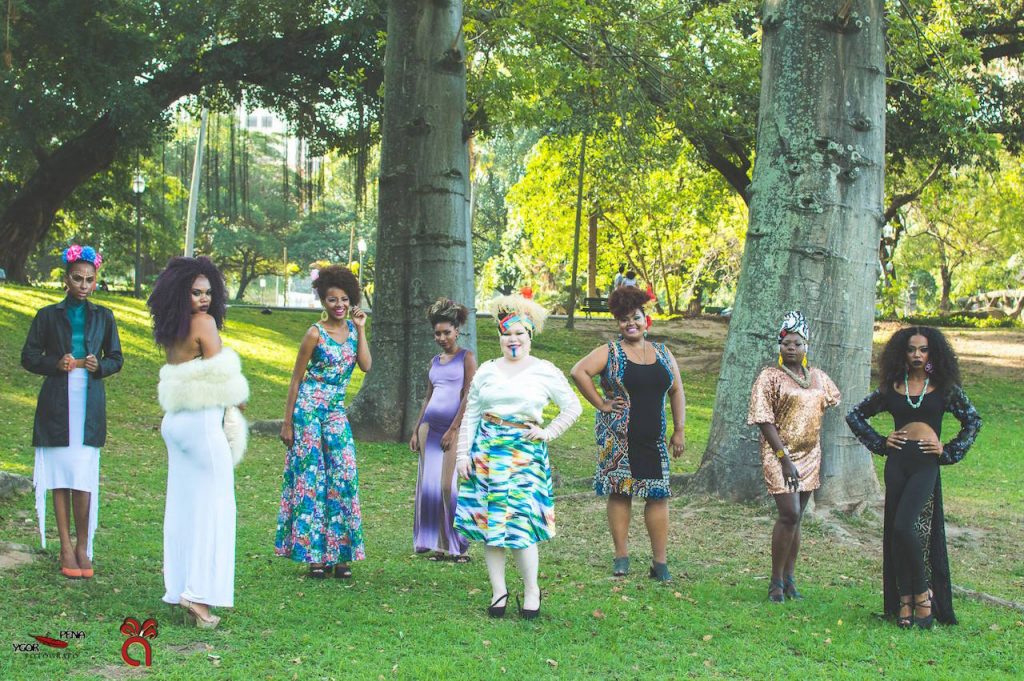 The Olympics and representations of black women

Following the recent 2016 Olympic Games, and with less than one week of Paralympic Games remaining, the panel also discussed the importance of representation of black women in sports and the idea of Rio as an Olympic City. “We live in a dichotomy that was the Rio de Janeiro of evictions–a city that is trying to diminish certain marginalized spaces so that the Games could take place here–but at the same time some of us really wanted to be happy with the Games. We really wanted to give a good reception to everyone who came,” explained Santanna.

Joice Silva emphasized the importance of sports as giving people an outlet and opportunities to travel and study. The women also discussed the importance of the black female athletes that competed in the 2016 Games, such as Gabby Douglas, Rafaela Silva, Simone Biles and Simone Manuel.

Santanna stated, “I saw a report saying that 70% of children from the United States don’t know how to swim. Black children. Why? Because they are not encouraged to compete in this kind of sport. So Simone Manuel’s huge victory winning the gold medal during the Olympics wasn’t just a personal victory for her, but a victory for the entire black population in the United States that finally saw a black person in the pool.”

In acknowledging the impactful victories of these athletes, the panelists made sure to mention the pressures and racism that these medalists suffered, despite having won gold during the Olympics.

Santanna said: “You have another female gymnast, Gabby, who also won two gold medals during the Olympics and the majority of the reports from United States focused on [the issue of her hair]. It was not about the fact that she won medals, but about her having strange hair during the presentation… She is a champion and we are discussing the girl’s hair?!” 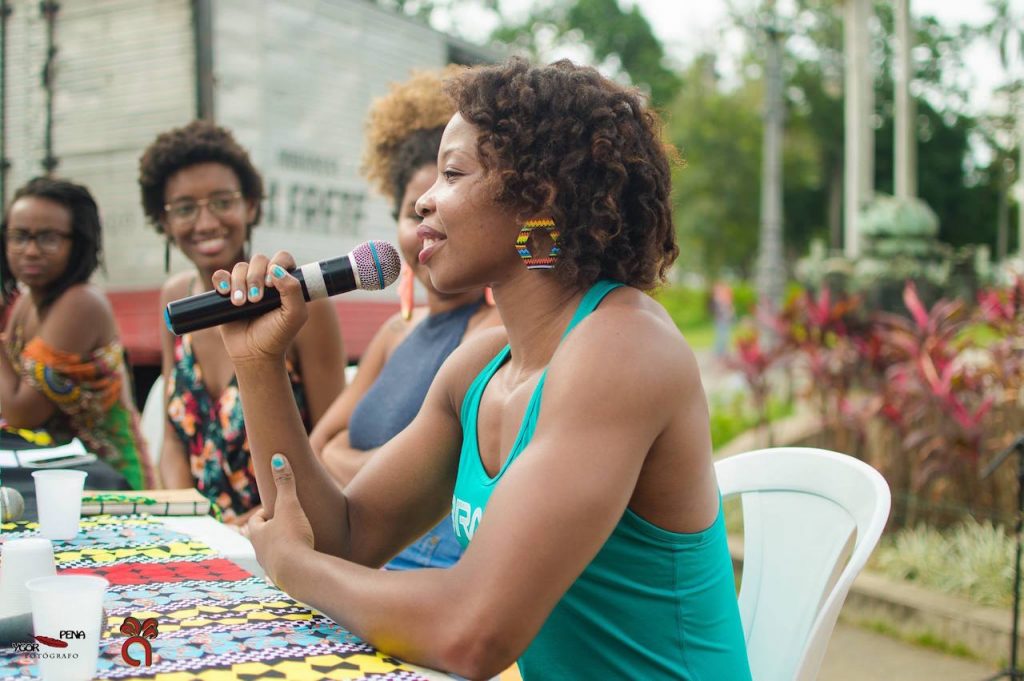 Panelist Ana Paula Patrocínio, a student of cultural production at Rio’s Federal University (UFRJ), posed the question: “What city do we want to live in?” She referenced the recent video of Mayor Eduardo Paes telling a black woman receiving a public housing unit that she’d have “a lot of sex here.”

“This is an example of the violence against the black population in this country,” stated Ana Paula Patrocínio. “When you are a woman, a black woman, you do not have rights over your own body. You are scared to walk the streets because you are objectified.” In addition, Patrocínio asserted that the lack of public transportation, especially for those living in Rio’s North and West Zone, intensifies such situations. “I live in a city in which mobility is very bad,” she said.

In considering these questions, the women on the panel offered solutions to the problems that continue to affect black women and the black community in Rio de Janeiro. Lisboa stated that public schools need to have a certain number of black teachers so that students can have a reference and form a sense of identity. White teachers need to be educated in African history so they can properly educate black children on their history, she insisted. Afro-Brazilian culture, such as capoeira, should be taught in schools so students can understand their history and culture.

At the end of the event a young black boy, no more than ten years old, asked the four panelists how they remain strong. Lisboa answered that her strength is “ancestral” and that this resistance did not start with her, but many generations before her, although her friends, family, and Candomblé religion help as well. She also said that her strength comes from wanting to make changes for her young cousins and relatives, so they do not have to endure the same suffering as she and other generations before them. 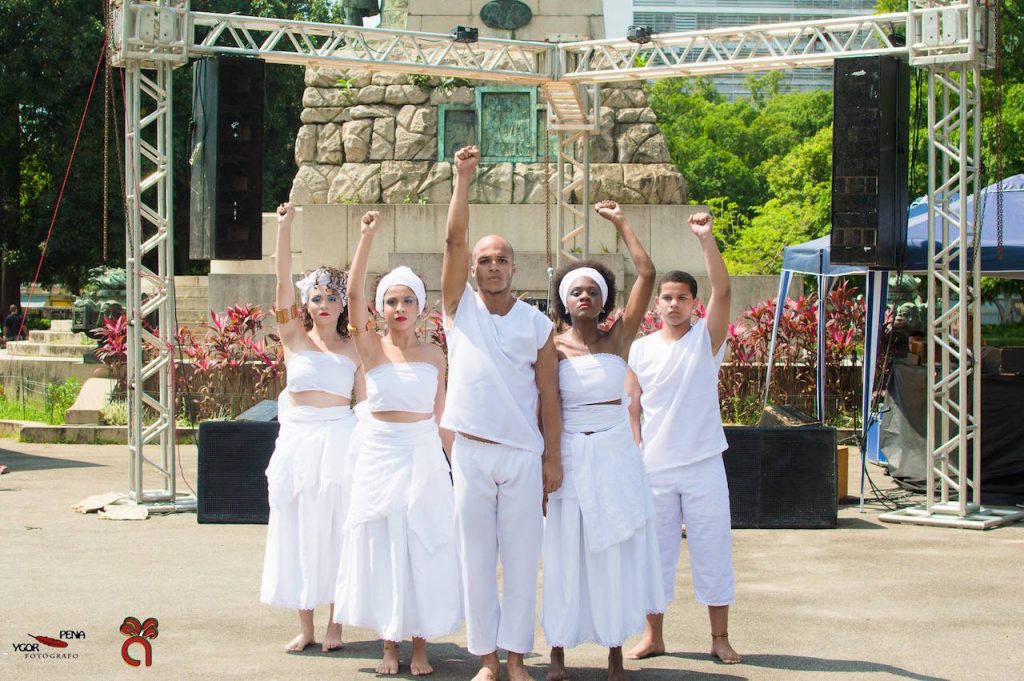 The Feira Crespa kinky hair festival was not the only event aimed at strengthening black identity and unity happening last weekend. An Afro-Brazilian food festival and a one day event in Mesquita in the Baixada Fluminense entitled Encrespa Geral also promoted black awareness and Afro-Brazilian culture. Further events are also planned with the 7th edition of Feira Crespa set to to take place on November 13.