On Tuesday, November 29 protests erupted outside Brazil’s Congress in Brasília as the Senate approved a proposal to amend the constitution that would authorize the implementation of harsh austerity measures. If passed, the proposal put forward by Brazilian Interim President Michel Temer will establish a low ceiling on all federal government expenditures for the next twenty years. An estimated 10,000 demonstrators, including teachers, students, public workers and landless laborers, voiced dissent and pressured Congress to vote against the proposal. Three cars were set on fire, and police used teargas and pepper spray to disperse the crowd.

While originally entitled Proposed Constitutional Amendment 241, or PEC 241, this last month the Senate changed the nomenclature to PEC 55. Despite the name change the content has remained the same. If passed this year, all expenditures including education, healthcare, social welfare and public services will be capped at the 2016 fiscal budget for the next two decades, adjusted annually for inflation. Moreover, the constitutional amendment would only allow for presidential revision after 10 years. 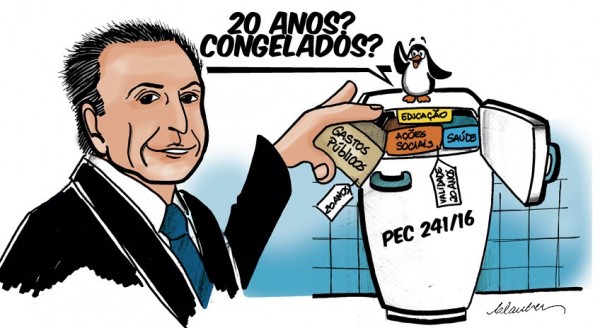 Temer and his administration argue that this drastic move will help reduce Brazil’s public debt, which represented 66.2% of the country’s GDP in 2015, and restore foreign investor confidence. In order for the constitutional amendment to pass, however, the proposal must win a three-fifths majority in two rounds of voting in the Chamber of Deputies, and two rounds of voting in the Senate. The proposal already won a majority vote in the Chamber of Deputies on October 10 and again on October 26. On Tuesday the Senate voted in favor by 61-14 in its first round. Temer’s government is confident that the proposal will be passed once again at the second round of voting scheduled to take place on December 13, after which it will pass on to Presidential sanction and become law.

While the proposal appears to be moving through the voting process quite smoothly, students, teachers, workers and public institutions are expressing staunch opposition with protests erupting across the country. Similar demonstrations to the one on Tuesday were held in the city of Rio de Janeiro on November 16 outside ALERJ, Rio de Janeiro’s legislative assembly, to protest PEC 55 and austerity measures at the state level in response to the post-Olympic fiscal crisis. Additionally, over one thousand schools and 172 universities are currently occupied, with the dean of the Federal University of Rio de Janeiro declaring PEC 55 a violation of constitutional rights. The Guardian this week published an aptly titled piece summarizing the situation: “Brazil is in crisis. And once again, the poorest will bear the burden.” Protestors have named the constitutional amendment PEC do Fim do Mundo, or Constitutional Amendment to End the World. In a recent press release, the Inter-American Commission on Human Rights (IAHCR) urges Brazilian government officials to uphold the regional and universal commitments to human rights signed by Brazil and warns that such austerity measures “would constitute an unauthorized regression under the Protocol [of San Salvador]”.

Budgetary planning that only adjusts for inflation means that factors like GDP, population growth, and demographic shifts, as well as the changing needs of the Brazilian people, will not be taken into account. The lack of flexibility and long-term timeline will make it difficult for the government to respond to changes in the global economy. Opponents argue that such drastic spending cuts will only entrench social inequality in Brazil and further limit low income communities’ access to opportunity. As it stands now, delayed payment of public workers and late distribution of student stipends are nothing new to the Brazilian public, a recent example being the delayed salaries of police and firefighters in Rio de Janeiro in the lead up to the Olympic Games.

The following graph is from a recent study comparing the actual GDP percentage spent on healthcare (blue) with what would have been the case had PEC 55 been passed in 2003. The study shows significantly less investment. The Brazilian universal healthcare system is severely underfunded. Imagine the future based on the below simulation. Physician, scientist, educator, and political commentator Drauzio Varella has stated that PEC 55 would result in the end of SUS, Brazil’s universal health system.

The following table shows expected losses to health over the next twenty years should PEC 55 be approved: 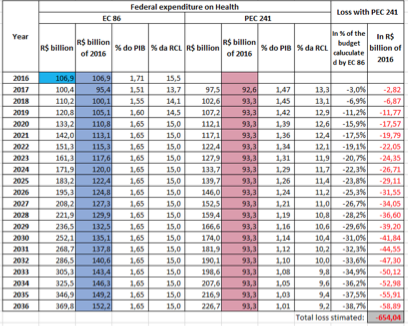 Yet another study finds that under PEC 55 education will lose R$24 billion per year. This is particularly alarming given the importance of education to the nation’s development and the current climate of teachers’ strikes in schools and universities throughout the country.

Critics also voice that the proposal disregards revenues collected by the state via taxation, and in no way aims to reform Brazil’s deeply unequal and regressive taxation system in which the poor pay disproportionately more than those at the top despite receiving chronically poor quality services. Likewise, the new policy does not propose to fight tax evasion, tax large fortunes, or implement a tax on dividends despite a recent study showing that introducing a tax on dividends could generate as much as US$12.5 billion and would only affect the rich. In this same vein, there is no mention of reforming the corporate tax break implemented during Dilma Rousseff’s presidency prior to her impeachment, which had devastating effects as seen in the recent economic crisis.

This proposal is certainly not the first attack on social welfare in Brazil. While Dilma Rousseff and the Worker’s Party operated on a platform of social aid for working classes, and successfully implemented the welfare safety net Bolsa Familia–which took Brazil off the World Hunger Map and moved it from most unequal nation on Earth to somewhere around 18th–Rousseff’s government nevertheless pushed for targeted cuts in a variety of government programs, including education, and vetoed several proposed congressional spending increases on salaries and pension payments. However, Rousseff was strategic and specific in her austerity measures, whereas Temer’s proposal is across the board and is unprecedented in scope and scale. Though many proponents of the proposal have argued that countries like Holland provide good examples of the success of austerity measures, no country has ever adopted a policy as strict and rigid as PEC 55. 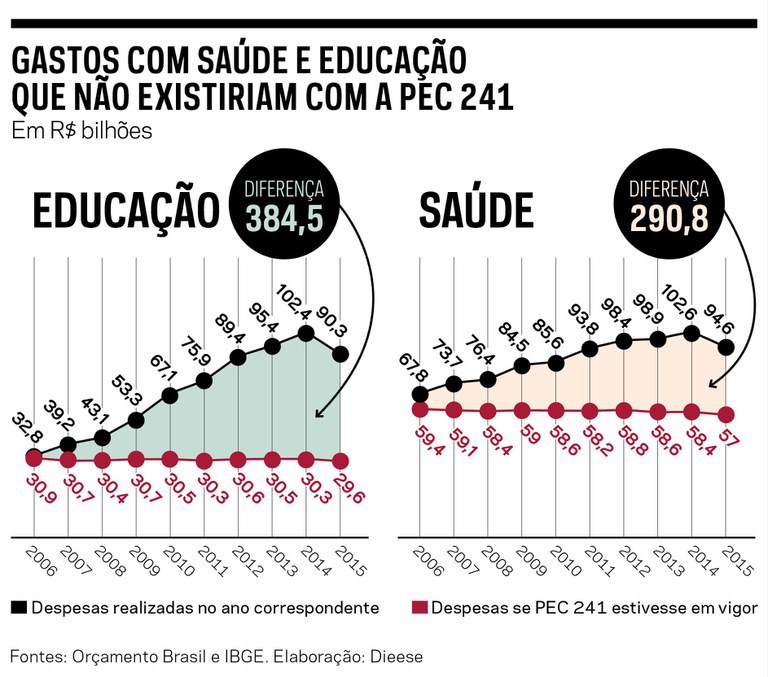 PEC 55 emerges at a time in which neoliberal policies have been facing considerable revision and criticism. The International Monetary Fund (IMF) recently published a study showing that austerity measures do not effectively address economic crises and lead to increased social inequality. Even leading architect of neoliberalism and laissez-faire policies Milton Friedman was weary of extreme austerity measures like those imposed in Greece.

Opponents to the proposal have expressed concern that this amendment would mark a significant departure from core elements of Brazil’s post-dictatorship constitution. Indeed, on October 7, 2016 the Attorney General declared the proposed amendment unconstitutional. For one, there is the concern that such an extreme measure goes against checks and balances among branches of government, as the legislature will be unable to influence budget decisions. Additionally, article six of the Brazilian Federal Constitution establishes the social rights of all Brazilians: education, health, nutrition, housing, transportation, leisure, safety, social security, and protection to maternity and childhood. In such a young democracy many are worried that a proposal such as PEC 55 will erode the current work in progress to improve social well-being given the nation’s dark history of inequality, and leave the marginalized and poor in an even more vulnerable situation.