On Saturday, December 10 the Complexo do Alemão-based community organization Raízes em Movimento (Roots in Movement Institute) hosted its 12th annual event Circulating: Dialogue and Communication in Favelas. The event occupied the street in front of the headquarters of Raízes in Morro do Alemão, and featured MC battles, slam poetry, a theater performance, and graffiti mural painting, as well as stencil making and painting for children and youth. Multiple simultaneous events encouraged participants to circulate through the space and generated a strong sense of sociability and liveliness. 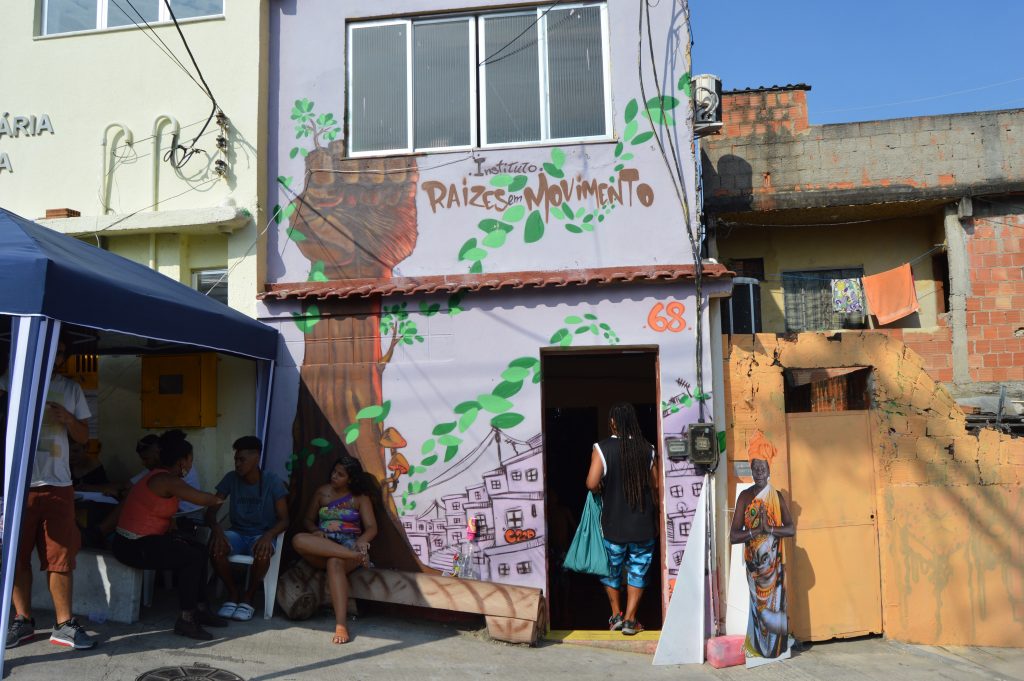 The theme for this year’s event was “re-invention,” a celebration of the creativity, resourcefulness and sustainable solutions born of the challenges and potentials within favela communities throughout Rio de Janeiro. The event showcases the various cultural and artistic expressions within favelas that demonstrate resistance and transformation, and also hopes to serve as a crossroads for collaboration and exchange for youth, artists and communities. Alan Brum Pinheiro is founder of the Instituto Raízes em Movimento, and describes the inspiration for this year’s theme:

“The favela turns itself, reconstructs itself, searches for paths of possibility, and reinvents itself. This is the idea of ‘reinventividade’– the capacity and resilience to restructure, even in the midst of deprivation, of negation, of the ‘no’ that society always imposes in varying ways, be it physical or symbolic… From this negation the favela never quits, never resigns itself, never gives up the ability to reinvent itself…We want to pay homage to these capacities.”

2016 marks the 15th anniversary of Instituto de Raízes em Movimento, an organization founded by favela residents in Complexo do Alemão in the North Zone of Rio de Janeiro. It is a non-profit human rights organization dedicated to social and cultural development, hosting public debates, cultural events, seminars and courses in the areas of media, public policy, sustainability and creative arts.

The event began with the live performance of the carnival bloco D’Aguas, followed by the performance of a favela-based theatre group from Vila Cruzeiro called Teatro da Laje. The group performed an excerpt from their newest piece, “Posso Falar?” (Can I Speak?), which recounts the struggles and triumphs of favela youth in public schools and was based off of the personal experiences of the young actors.

The event also featured two art exhibitions. The first, entitled “Essa é minha classe”, or “This is my class”, displayed the artwork of a collective of graffiti artists from Complexo Alemão. The second was a series of photographs and a film screening which document the project FavelAldeia, an initiative spearheaded by Raízes to create a cultural exchange between residents of Complexo Alemão and the Tupinambá indigenous community in Ilheús, Bahia. In April of 2016, several residents of Alemão, including graffiti and funk artists, photographers and youth involved in audiovisual production, traveled to Ilheus to witness and partake in the third annual Indigenous Youth Games. In return, two members of the Tupinambá community traveled to Complexo do Alemão to attend Saturday’s event.

“We have come to understand that systemic oppression is not exclusively experienced by favelas–it is an oppression of the peripheries, understanding peripheries to be areas of the margin, of poverty, of indigenous communities and quilombos, areas that are outside of the sphere that dominates the processes of our society, areas that are systematically denied rights and the possibility for a dignified life. And all of these areas have similar struggles. We face the same battles”, explains Alan.

Representatives from the campaign Defezap also participated in the event and set up a booth for participants to listen to recordings of favela residents recounting personal experiences of state-perpetrated violence. Defezap is part of a movement of online tools and apps for favela residents to use to safely report incidents of state violence and send video recordings. It is also a network for citizens to get informed of their rights and proper recourse in situations of injustice at the hands of police. The campaign was implemented by the non-profit watchdog group Meu Rio in response to the viral spreading of video recordings on social media that were documenting a rise in police brutality throughout favelas. Rather than create a new means of collecting information, the campaign opted to operate within existing channels of communication in favelas by establishing a WhatsApp number and website. This allows residents to easily share important evidence of state violence. Their most recent victory was in City of God. During a recent police occupation a collective mandate was put in place allowing police to conduct house searches. Many rights abuses were recorded during these home invasions and sent to Defezap. With the help of the Public Defenders Office the community was successful in revoking this collective mandate. 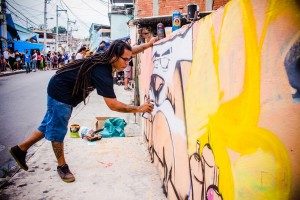 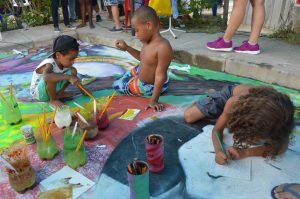 The stand-up comedy duo Magano and Sonata from City of God performed, and were followed by the samba band “Som de Preta,” a favela-based music group made up entirely of black women. The significance of an event like Circulating is particularly important given the Pacifying Police Units‘ continued practice of limiting cultural events in favelas. Due to its long-standing history in the favela, Raízes fortunately did not encounter any roadblocks from the police in hosting the event. However, many other community members and groups trying to occupy the street in the same way have been prevented from doing so. The very same week as this event, the favela-based news source Coletivo Papo Reto reported that the police were preventing a pagode group in Alemão from performing for the community. As Alan explains: “You can’t have the same demands for events in favelas as in the city, when we haven’t been guaranteed the same rights. This bureaucracy is used as a way to deny us the freedom of expression and the right to use the street… The street in the favela is a place of excellence, of learning, of socialization, of coexistence, to touch each other, to live, to relate to one another. In the formal city, the street is merely a place of mobility. In the favela, it has a different meaning, and was created precisely because of the absence of the state. If I have no public space for leisure, I reinvent my own…”. The event Circulation and its theme of “Reinvention” demonstrate yet again the potential of favelas and capacity for creation in the face of adversity and limited resources.