An intimate group sits on two wooden benches in a parking lot. In some spots the asphalt has been removed and there are a number of indigenous bamboo constructions in beginning phases. The afternoon sun is burning, not a shadow to retreat to. The group is discussing methods of reforestation, the toxicity of tomato seeds and invasive species in Brazilian forests. This is part of a three-day workshop called “Reforestation Experience” held at the Aldeia Maracanã. In the heart of Rio’s urban core, this is the name of the indigenous community occupying the terrain since 2006.

Multi-lane highways and the massive abandoned Maracanã stadium encircle this heavily paved region of Rio’s North Zone, where about a dozen people are living to care for the space. They are the remaining members of Aldeia Maracanã, an urban indigenous community that occupied the former Indigenous Museum, also on the site but declared unsafe to occupy since their last eviction. Twice they were evicted, including in 2013 when the Museum was decreed to turn into a Reference Center for the Culture of Indigenous Peoples in time for the 2016 Olympic Games. In fact, from 1953 to 1977 the old building had been an Indigenous Museum dedicated to indigenous culture in Brazil, the first of its kind in Latin America.

Yet the Reference Center for the Culture of Indigenous Peoples never materialized. Instead, the government not only left the building in disrepair–a move the indigenous community views as intentional, in order to encourage the building to decay and ultimately be demolished–but also paved over the wooded area and historic horticulture research site next door, leaving behind an overflow parking lot for the Maracanã stadium. Public resources were used for extensive modifications of the famous soccer stadium where the Olympics’ opening and closing ceremonies took place. “The pedestrian bridge over there cost R$14 million,” says Paulo César Vidal, a supporter of the indigenous community. “But no one ever uses it.”

The whole Maracanã stadium has become “a ghost stadium,” as Vidal put it. “The people who built it–Marcelo Odebrecht, Eike Batista, Sérgio Cabral–they are all in prison. Everything is paralyzed. Before the Olympics, there used to be a swimming pool open to everyone and a public sports ground. They destroyed that, too. At least we could fight the plans for the shopping mall they wanted to build here (on the land of the Indigenous Museum).”

Given the State’s unfulfilled promise, in November, the indigenous inhabitants of the Museum who had been forcibly evicted by the Military Police in 2013, and had not been among those who had taken public housing from the State, returned to the land intent on reclaiming the parking lot as an Indigenous University in the middle of Rio de Janeiro’s urban core. A place to spread indigenous knowledge about agriculture and sustainability.

Korubo, who arrived in Rio five years ago from the state of Acre in the Amazon rainforest, where his tribe still lives, explained, “We want to show society that Indians are doing good things. Look at the people running around this place [Rio de Janeiro]. The air they breathe is so polluted from all the cars. If you would ask them, they sure would prefer to have some trees.”

Pedro Lima, a street artist whose great-grandfather was indigenous, is another resident of the community. He came here two months ago, looking for a peaceful place and “to save a bit of his ancestry.” Pedro enjoys working in the community. “I don’t have the impression that we are building an Indian village inside the city. To me, it’s more like the opposite. Indigenous people have been here long before the city came. The idea is to build a place where people can recover a bit from modern society.”

Now he carries water in plastic bottles to irrigate the small plants that are shyly growing in the crevices that have been broken at the edge of the asphalt: corn, pumpkin, wild cabbage, among others. It is a difficult business, since there is no running water and sometimes the site goes for weeks without rain. To access water, community members cross two major roads and climb down a concrete channel. Sometimes a nearby gas station provides water. That is why building a rainwater basin is part of the workshop, too.

On the second day of the workshop, the group learns about green manure, as they incorporate leaf and organic waste compost into the nutrient-depleted, packed soil dug up from under the removed asphalt. In particular, they discuss leguminous green manure, and introduce a number of hearty seeds that can be planted in such difficult conditions to reclaim the soil through intense nitrogen fixation. One of them sounds like a tiny maraca when shaken. The group’s plan is to reforest the entire parking lot as a collective project, inviting more and more supporters to join then and in the process learn from this indigenous knowledge. Lessons can be taken elsewhere in the city, to help build a more sustainable Rio. 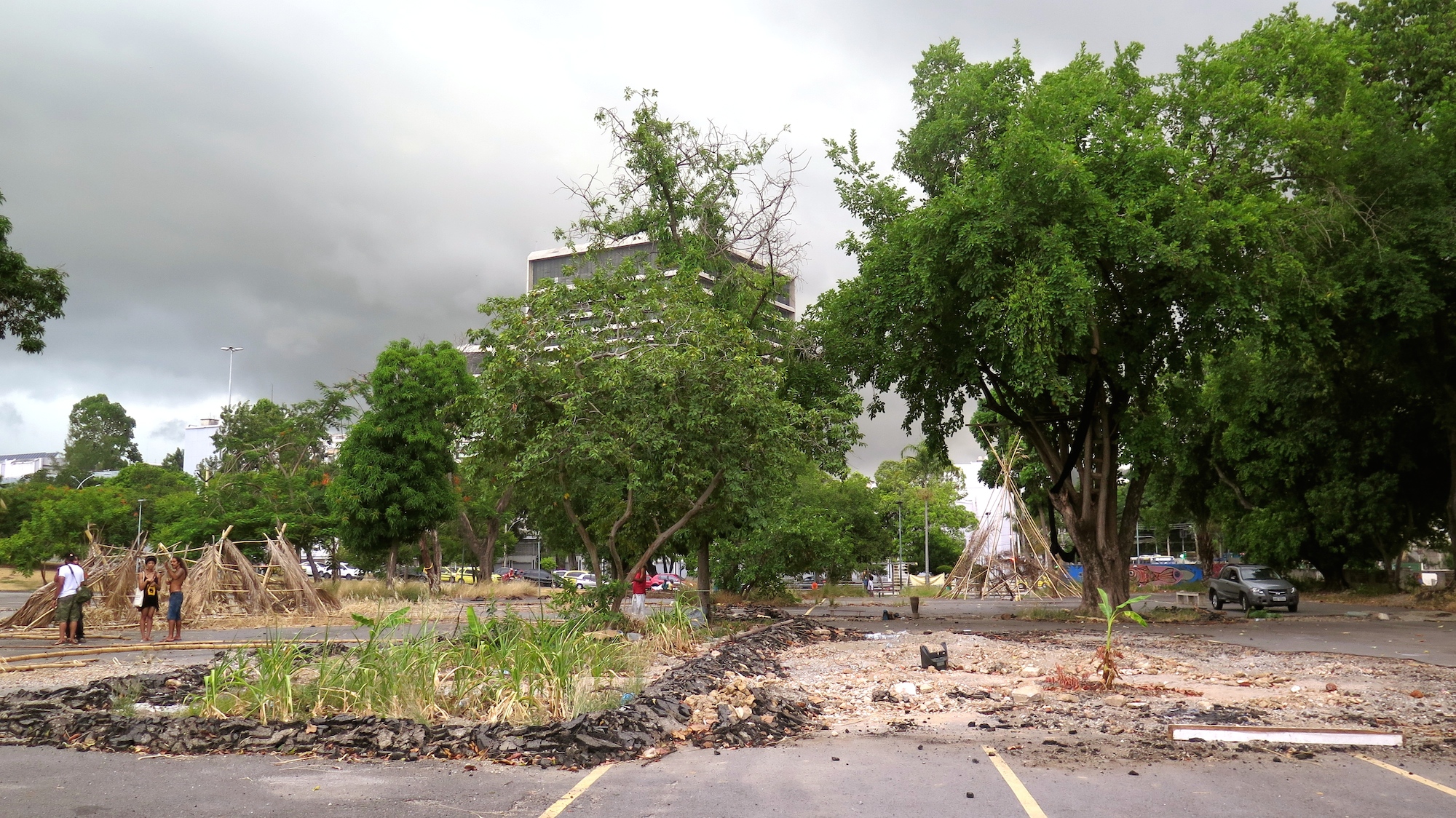 After the theoretical presentation of the workshop is over and night has fallen, participants grab a pickaxe and a wheelbarrow to get rid of more pavement. Although eviction threats are at bay, the conflict remains. And one advantage of the poorly executed construction works in the run-up to the Olympics is that in some places the asphalt is already falling apart without any human influence.

Korubo points out the ant trail at his feet: “Look, we have a lot of ants living here. This one is carrying a leaf. They are already helping us with the reforestation.” Even if it takes some time to grow a forest here, he’s optimistic: “The indigenous people have more than 500 years experience resisting. We will stay.”

Korubo adds that the community is looking for donations of 1000 seedlings.

Catalytic Communities, the US 501[c][3] nonprofit that runs RioOnWatch, can act as fiscal sponsor for those who would like to make a donation online here. Please write “Aldeia seedlings” in the “earmark” category. Or simply message donate@catcomm.org informing us that your contribution is earmarked for “Aldeia seedlings.”