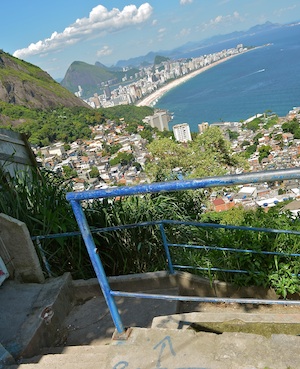 I edit a blog about Vidigal, Vidiga!. For some time I’ve been walking through the favela and hearing about the construction of a small luxury hotel, more precisely in the spectacular viewpoint area of Arvrão, and designed by renowned architect Hélio Pellegrino.

Rumor has it that the construction site and work being done are in a risky area, and that the soil is too unstable for such heavy a job – because, despite the hotel to-be having only two floors, there will also be rooftop pool.

And, behold: on Wednesday, an article was published by the newspaper O Globo in which the architect exposed his innovative vision: “Vidigal was always the senzala (slave quarters) of the great house of Ipanema and Leblon. Now everyone can explore the area and discover what’s in the area, which is wonderful.”

Using that old interpretation technique that I learned in primary school, I now analyze his words:

“Now everyone can explore the area and discover what’s in the region”: I can point out two inaccuracies there. The first is that not “everybody” can attend a 5 star “luxury” hotel. And, in fact, many people who are really looking for a Vidigal for “everyone” have been working against real estate overvaluation, the now-famous “white removal” (gentrification), which subtly pushes residents away from the community. 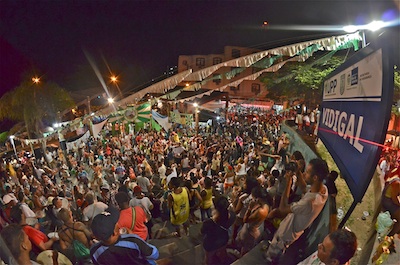 It is important to let people know that “everybody” can ALREADY discover the wonders of Vidigal–its walking trails, its bars, restaurants, festivals and nightlife, without the presence of said hotel. It’s all here and there are many people coming up the hill. Even more than the present road infrastructure can support, actually.

Next, “slaves of the big house of Ipanema”: this shows a somewhat colonial and particularly ignorant vision of the Vidigal community. The architect might not know of the rich cultural life that has always existed here, ever since the hill was occupied… the organized dances of the Águia Futebol Clube (Eagle Football Club) which congested the former Estrada do Tambá (Tambá Road) – currently known as Estrada Presidente Goulart – when people from middle class neighborhoods went up the hill, as they still do today, benefitting from the cultural life in Vidigal. You may not have heard of our celebrations, which, combined, can attract up to 1200 people in one night. The Lamparina (or Luv) parties and the festivities of Alto Vidigal, right there on Arvrão.

Yet another mention that deeply bothered me was saying that the new construction “is playing a role in sustainability,” and that it is “innovative and will thus help the people around learn of recycling and reusing possibilities,” as said Mr. Antonio Rodriguez, a business partner of Pellegrino. Perhaps he should be introduced to the activities of Sitiê Vidigal, where trash becomes furniture, or even to Wilson Alexandre, who built an entire residential condominium made with recycled material (photo).

The Vidigal Residents Association also issued its opinion. They are in favor of external investment that helps develop local tourism. However, due to Vidigal’s current infrastructure, they question the development of “super projects” like this one.

I am a resident who’s happy with Vidigal’s economic growth, but also offended by the limited and colonialist vision expressed by Mr. Hélio Pellegrino. 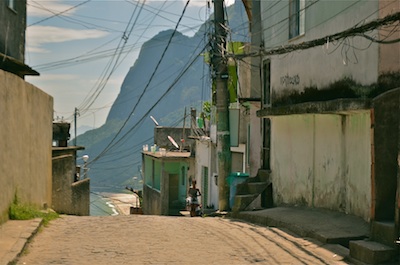