“We always wish for the transformation of our world, but the world will never be transformed if we don’t start in the minds of youth.” These are the words that drive Paulo Cesar Avelino, a pastor in the Complexo do Alemão favela, to infuse his projects directed towards local youth development with great love and care. Paulo, now 55 years old, grew up in Alemão himself, and remembers with great fondness the “peace and happiness” he experienced through an abundance of “free space to run around.” Nowadays, however, many residents in Alemão end up staying home due to increased violence and technology usage. Often, Paulo states, “we are hostages in our own homes.” 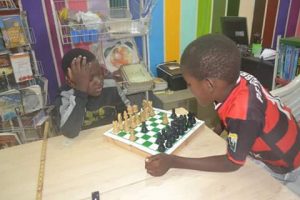 Unfortunately, few activities and opportunities are currently provided to adolescents in Alemão. “There is almost nothing to do,” explains Paulo. This issue has arisen in part due to poor governmental investment. Six years ago, the community’s former widely used soccer field and surrounding area–a space that had been heavily used for socializing and gathering–were converted by the city into a bike park for the Olympics, but it was mismanaged, and the half-finished park now lies unused.

In stark contrast, Paulo has personally invested much time and his limited resources into the development of three separate projects to benefit youth in Alemão. The first two, a small park and pool, after much usage and upkeep, eventually wore down beyond repair. But in 2010, the pastor moved onto the “dream he had always had:” to establish a community library. “I have always loved to read, and I have always been curious,” says Paulo. In fact, as a child, Paulo was so curious that he would look up each new word in his personal dictionary. Now, with a lifetime’s experience, the pastor understands how education and culture can positively impact the self-dignity and motivation of low-income youth. With help, they can overcome barriers. “They are the product of a specific process that lacks teaching, conscience, and love,” Paulo says. His solution? Put simply, “there is nothing better than knowledge.” 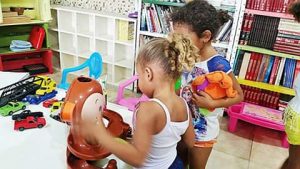 But this is not to say that the project doesn’t serve an entertainment role as well. When the library is open, young children can often be found playing with the various toys and games that the pastor has collected. Meanwhile, for young adults, Paulo confirms that 50 Shades of Gray has been frequently checked out. The pastor also identifies an important relationship between entertainment and the building of community. Paulo vividly remembers when only one home in Alemão owned a television, and how everyone would gather there to watch films as if it were a theater. Switching to present-day Rio de Janeiro, Paulo cites the library in Manguinhos as an example of the power of films in attracting large crowds. After Manguinhos’ neighborhood library began projecting films, “youth began to go, and those who didn’t want to see the movies ended up reading the books,” resulting in even higher turnout. This bringing together of members of the community to learn and enjoy each other’s company is of critical importance in current Brazilian consumer culture. Speaking broadly, the pastor notes that “people are more worried about having than being.” 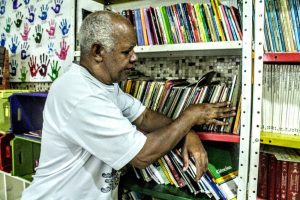 Looking forward, Paulo hopes to add a cinematic projection room to Alemão’s community library, and has a 35 square-meter space to do so. Unfortunately, financial resources currently stand as the primary barrier to this installation. As such, donations are crucial, and the pastor has considered implementing a system of monthly contributions from anyone who can give. Of equal importance is Paulo’s need for additional helpers to help him keep the library open. Despite debilitating spinal issues that require physical therapy throughout the week, Paulo manages to open the library most Tuesdays, Thursdays, and Saturdays from around 9:00AM until the early afternoon, and then again for a shorter period starting at 5:00PM. However, the pastor knows that frequenting a library, like many other activities, is a routine that requires stability and availability on the part of the institution itself. To ensure that the library can stay open as much as possible and fulfill its role in fighting educational inequality, Paulo is requesting help from volunteers who can take on shifts to open the library and support neighborhood kids.

If you, or someone you know is able to offer books, financial resources, or time to the community library, please reach out to Paulo Avelino via email.