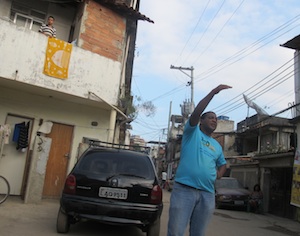 Bold words inscribed in Carlos Alberto Costa’s ink marked our group’s entry into Favela Asa Branca: “True leaders don’t create followers; they create more leaders.” Carlos, better known as Bezerra, the president of the Resident’s Association of Asa Branca, is a tremendous figure more than balanced by a tremendously inviting persona that manifests itself in the way he jokes with his residents, in the familiarity with which he embraces his visitors, and in the eagerness that accompanies his stories of old struggles and successes. Gentle attention accompanies his every step, his every word: just the personality needed to coordinate a self-built community of thousands through the length of decades.

After the blocks of high-rise condos that dominated the last twenty minutes of our commute, the contrast that Asa Branca offered was striking: what awaited us as we stepped off our bus was a community that breathed with a life both meticulously planned and organically developed, a neighborhood which, for decades, has found its engine in an intimate circuit between the demands and capacities of its residents. By the nature of Brazil’s oppressive history, it’s not a surprise that Asa Branca has learned to provide for its own needs. Like most other favelas, it had to. 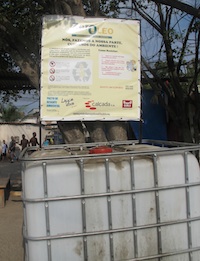 But there’s a spirit of creative problem-solving that’s especially evident in Asa Branca from the first glance. Just seconds out of the bus, Bezerra proudly led us to a large tub on the side of the road, and there sat some spare vegetable oil collected over days from within the favela, ready to be sold to soap companies for profit. And a few meters over, we crossed a speed bump planned and built not by the Prefeitura (City government) but by a collection of residents that decided it was necessary. Soon after arrival, visitors were treated to lunch, where Bezerra described the process by which leaders are elected by the Associação de Moradores (Residents’ Association), and the democratic process by which such community-wide decisions are made.

Such projects are not only implemented by the Residents’ Association, but are instigated simply by concerned individuals. That afternoon, Bezerra introduced our group to Francisco, who has been gathering food every Christmas and distributing it to the community’s poorest for some 10 years. “He started when he was 17,” Bezerra explained with pride. Last Christmas, Francisco’s project reached 200 families. 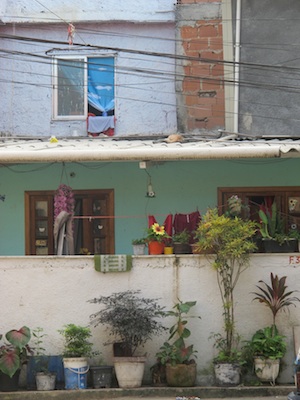 Recounting the community’s evolution, Bezerra told us how a particular block was laid out with 5×7 meter dwellings based on the number of people who needed land, and how the construction proceeded from inside-out and bottom-up. “They built a small shack of tin to sleep in at night as they lay bricks around themselves by day,” he explained. “They lay the sewerage pipes on the flood-prone ground then filled in and built over them instead of digging underground.” The whole infrastructure of underground pipes that run through the area of the favela was, by necessity, self-built. Such conditions came with limitations: an adjacent stream was filthy as it received sewerage from the community’s pipes.

But the City Works department has since stepped in to connect Asa Branca’s system to the city’s main sewers. With light in his eyes, Bezerra recalled a city engineer’s evaluation of the community-built sewer line: “It was great, it was functioning very well!” All that’s left is to connect it to the city’s sewers – a move that at once fulfills the municipality’s promises to its citizens and acknowledges the self-led achievements of Asa Branca’s population. Bezerra had been waiting to receive the government on these terms: when asked about a map of the community’s self-built sewers, he recalls how he had all the necessary documents ready to facilitate the transition. 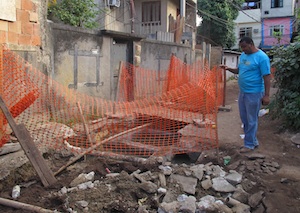 Some of the city’s interventions, however, have fallen short of this careful balance. In that same area where we took our first steps on Asa Branca’s soil we learned of the city’s plans to relocate some residents of the community in order to install a ten-lane highway for the 2016 Olympic events. The future formalization of once-siphoned water supply threatens to bring water bills that some in the community cannot afford and thus pushing what locals are calling “white expulsion.” And a newly-built sidewalk has proven hazardous, priming drivers to drive faster on what had been established as a shared space for vehicles and pedestrians.

Bezerra remains forward-looking and optimistic. “I don’t want me. I want better than me!” he declared on the subject of his retirement: big expectations from a man who had been voted in as Associação president numerous times and often against his own will. After expressing his hopes about the adjacent square of land where the city plans to build a school and daycare center, he told us of a fundraising party he’s arranging for September 2nd to fill the jar for the next president. He then handed us his business cards. Bezerra is an avid Facebook user. 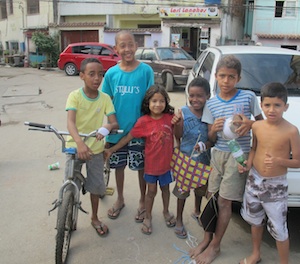 The air was festive around us. Children skipped with kites in hand; residents set up a trampoline for Festa Junina at the cross of two pathways; and Bezerra’s nephew, Wesley, weaved around us on his bicycle, quizzing me on my Portuguese and dictating a sentence for me to write on my notepad: “Eu tive um amigo no Rio de Janeiro e ele se chama Wesley” (“I had a friend in Rio and his name is Wesley”).

This was one of the first of NGO Catalytic Communities‘ educational favela visits for Rio+20, and visitors included representatives from (among others) Columbia University, UC Berkeley, Next American City, Earth In Brackets, and EcoCity Builders – the latter of which had presented their interactive EcoCitizen Map during CatComm’s premiere of “Favela as a Sustainable Model” two days prior. Kirstin Miller, Executive Director of EcoCity Builders, was struck by the “high level social cohesion and a sense of belonging and community” she sensed in the area that likely “comes from his (Bezerra’s) leadership style and availability to everyone.” Though she noted the lack of city services like healthcare and sanitation, Asa Branca struck her as “closer to ecocity conditions in many ways than their car dependent wealthier neighbors.” Kaganga John, Director of the Kikandwa Environmental Association, was equally impressed; his partner Heather Box from the Million Person Project spoke of how “he was taking notes to help him improve his own community” in Uganda.