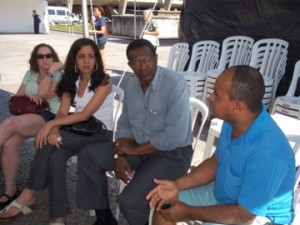 In front of Rio’s Museum of Modern Art, at the heart of the Rio+20 People’s Summit, community leaders gathered on Saturday morning to create a collective narrative of the favela today. Organized by CatComm, the event brought together representatives from five very different favelas in all three major zones of the city, citizens from the asphalt (or formal city) and NGO representatives in a dynamic discussion of the major themes that can be said to define Rio’s favelas in 2012.

The debate opened with explanations of how the different communities were established, largely by Northeastern workers contracted in the various stages and locations of Rio’s modern construction, closely followed by an exploration of the long held notions of Rio as a ‘Divided City.’

Neuza Nascimento, founder of the Integrated Center in Support of Community Children and Teens in the North Zone favela of Parada de Lucas maintains that the separation still very much exists, saying: “The favela today is a closed space, at least where I live because there’s no circulation. People feel protected within the community because there’s prejudice outside, but that then means people outside see the community as closed. It’s a vicious circle.” 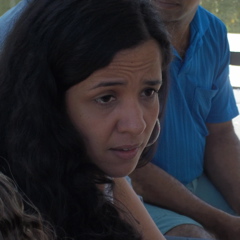 Irenaldo Honório da Silva, residents association president in the far North Zone favela Pica-Pau in Cordovil, agreed that the idea of the favela as separate is often reinforced by residents themselves and highlighted the need for this to change. He said: “People shouldn’t be ashamed of where they live… People need to get rid of this [idea]. We need to open up and show that we can change society.”

Parada de Lucas and Pica-Pau, both distant from the city’s central and south zones where commerce, construction and tourism is concentrated, remain unpacified and marked by government absence. The representatives from pacified favelas noted improved integration since receiving UPP (Police Pacification Units). Flavio Minervino from the Prazeres community in Santa Teresa talked of the raised self-esteem and an increase in visitors while Carlos Dionisio from Pavão-Pavãozinho in Copacabana said, “It’s a source of pride to invite friends to go out in the community.”

Discussion of the real estate market in the favela revealed that the situation varies dramatically depending on location but that as with general Rio real estate trends, prices have risen and continue to rise. Carlos said that in Pavão-Pavãozinho, which received the 5th UPP in December 2009, a one bedroom property can be sold for up to R$300,000, noting that increasing numbers of foreigners and people from the ‘asphalt’ or formal city are buying in the community. 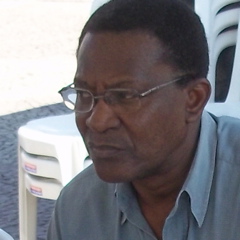 Paula Verônica from the residents association of Muzema, a West Zone community near wealthy Barra da Tijuca, spoke of when her community was threatened with removal last year and how some people looked for alternative residences in other nearby favelas but couldn’t find anything within their means. She concluded: “It’s practically impossible to leave the favela, or buy a property in the favela itself.”

Attitudes towards Rio’s mega-events varied. Paula argued against the developments that threaten communities, saying “I almost lost my house because of the mega-events.. The works are all on top of favelas, literally on top of people.” However, Carlos described them as an opportunity. He said: “For our city, receiving and producing mega-events is a positive thing. The world is watching, which is good.”

CatComm founder and executive director Theresa Williamson discussed the general Olympic phenomenon worldwide. She said: “Mega events allow people in power at that time to execute their ideas. If whoever is in power wants to make positive changes, great, if not then it is a big struggle for the population.” 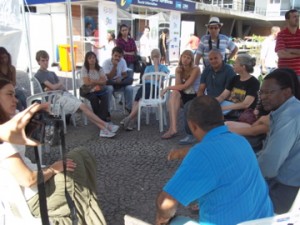 Discussing economic life in the community, Neuza described how the Parada de Lucas economy is based on construction materials and building work in the community, adding that most people work outside the favela. Flavio talked about how businesses in Prazeres are yet to be formalized but that the increase in tourists following pacification has pushed businesses to improve. Irenaldo commented on the need for training so that small business owners could improve the way they manage operations.

The discussion concluded with hopes for the future, posing the question ‘what is your ideal vision for your community?’ While all talked about specific needs of their communities, common themes emerged. Basic sanitation and garbage collection are priorities, cited specifically by Irenaldo, Neuza and Paula. In Prazeres, road access to the top of the favela is a dream of the community, said Flavio. Carlos called for registered land titles giving people their legal rights. Paula also said there’s a demand for formalizing the community, saying “People want to power to make demands of the government. As it is, a lot of people feel they don’t have the right.”

Ending on a note of hope, participants recognised the importance of bringing people together to discuss these themes. Irenaldo closed the discussion with a call for more interaction: “We need more of what we’ve been doing here today, dialogue and participation.”