The worldwide chorus of condemnation of the murder of Marielle Franco and Anderson Pedro Gomes has been joined by demonstrations in the Australian cities of Melbourne, Adelaide, Sydney, and Brisbane. The demonstrations were organized by Brazilian communities across the country.

In Melbourne, over a hundred people met on the steps of the State Library of Victoria and marched through the city, expressing their grief and outrage at the crime and at the loss of one of Rio de Janeiro’s most powerful popular voices.

At a demonstration in the Central Business District of Adelaide, participants read poetry, brandished placards, and held candles in defiant memory of Franco. Organizer Gabriela Ataide told RioOnWatch they were refusing to be silent about what had happened.

“Who ever murdered Marielle tried to send a message to all of us,” she said. “It was a message to back off. They don’t like when someone speaks up for the periphery.” 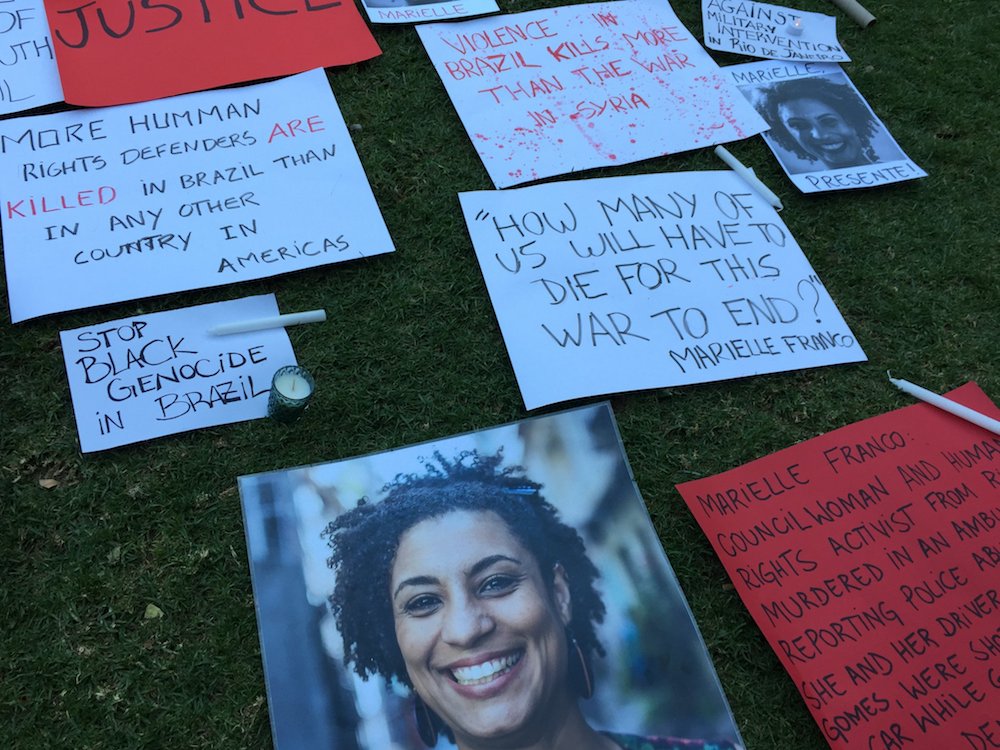 Franco’s murder is widely considered to be ‘payback’ for her outspoken defense of human rights, particularly the rights of young, black residents of Rio’s favelas who are overwhelmingly the victims of police violence and repression. The demonstrators in Melbourne and Adelaide also expressed their grave concern for the welfare of young black people in Rio’s poorest neighborhoods in light of President Temer’s recent declaration of federal military intervention in Rio, an action that Franco was involved in monitoring.

“It’s a very sensitive moment in Brazil and they are directly attacking our democracy,” said Ataide. “We want to send back the message to them that we won’t back off.”

“We will claim justice for the assassination of Marielle and Anderson and we will let the world know that there is real genocide of black youths in Brazil.”

Fernanda Duarte, an organizer of the protest in Melbourne, told RioOnWatch that “it was our opportunity to embrace other Brazilians” in this time of struggle, and “to cry together and demand justice.”

“Although distant, we want our voices here in Australia to be added to that of all other Brazilian citizens, to the people of Rio de Janeiro and Maré. Marielle was present and her ideas echoed with every cry of resistance!”

Duarte stressed that the murder of Marielle Franco would not dim the energy of communities inside and outside of Brazil to fight for a just society. “We are joining together for the affirmation of life and the prosperity of Brazilian democracy.”

See photos from the Melbourne protest here, and more photos and videos on the  Melbourne and Adelaide Facebook event pages.

In addition to protests in Australia and ongoing protests across Brazil, the last several days have seen demonstrations and vigils in honor of Marielle Franco in Buenos Aires, Montevideo, Lima, Bogotá, Mexico City, Tijuana, New York, Washington DC, Lisbon, Porto, Coimbra, Madrid, Barcelona, Paris, Amsterdam, London, Dublin, Berlin, Brussels, Providence, Lyon and Chiang Mei, to name just a selection of events curated on a Facebook post by Alemão activist Raull Santiago. We will be adding future events as we learn of them to our events calendar. Don’t miss our video from the March 16 London vigil: