I share here an excerpt from an article written by the urban architect Antônio Augusto Veríssimo on the production of housing for the program ‘Minha Casa, Minha Vida’ (My House, My Life) in Rio de Janeiro, focusing on the issue of housing location. To read the full article, click here. — Raquel Rolnik, Special Rapporteur to the UN on Adequate Housing

Housing, Employment and Mobility: The debate on the location of Social Interest Housing in the city of Rio de Janeiro

This article was written in early 2010 as a reaction to the movement of certain business sectors that demanded, together with the municipal executive and legislative branches, changes in legislation. Their goal was to integrate into the urban zones certain areas that were prohibited due to poor infrastructure, or because they were used for agricultural activities in the Administrative Region of Santa Cruz.

To defend their interests, these sectors argued for the use of these areas to build housing projects, funded by (the federal government housing program) ‘Minha Casa, Minha Vida,’ homes they argued would help satisfy the existing housing deficit while meeting additional demand created by workers attracted to the new industrial sector in Santa Cruz.

The data collected and analyzed in this study aimed to demonstrate that: (i) there was already an extreme imbalance in the distribution of employment opportunities and housing in the city, with a subsequent profound and detrimental impact on the mobility of the population; (ii) that Planning Area (AP) 5, the region west of Rio where the Santa Cruz neighbourhood is situated, was already a “região dormitório” (residential region of the city devoid of work opportunity) given that this zone was a main supplier of manpower to other areas of the city; to encourage the production of social housing in this region would only deepen the city’s socio-spatial segregation and lead to the formation of more ghettos of poverty; (iii) the main challenge was finding a way to create housing opportunities for workers in the areas where there are opportunities for them to work; this would require producing incentives for the production of housing units primarily in the city center (AP 1), as well as the north and suburban neighborhoods (AP3) of Rio.

One must acknowledge, however, that during this interval the city government realized this trend of concentration and went on to establish tighter restrictions on public housing location, as well as identifying better located properties and directly acquiring them in order to stimulate production (in these locations). 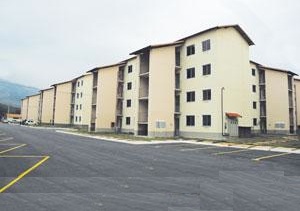